Over the last 40 years, China has experienced the fastest economic growth anywhere but also paid a heavy environmental price. China has many of the world’s most polluted cities and is the world’s largest emitter of greenhouse gases.

The Beijing-Tianjin-Hebei region, known as Jing-Jin-Ji, has the country’s, with an annual average fine particulate matter (PM2.5) concentration of 93 micrograms per cubic meter (μg/m3) in 2014, far exceeding the national PM2.5 standard of 35 μg/m3 and the World Health Organization (WHO) PM2.5 standard of 10 μg/m3.

Particularly during winter, the region is often engulfed in heavy smog lingering for days and posing a serious health threat.

Concerned with the adverse health and environmental consequences from severe air pollution, the government of China has declared “war on air pollution,” implementing a series of mitigation actions. In 2013, the State Council issued the Air Pollution Prevention and Control Action Plan.

To support the implementation of the Action Plan, the World Bank approved a US$500 million loan to China for the Innovative Financing for Air Pollution Control in Jing-Jin-Ji Program in March 2016. It was for the first time in both China and the energy sector that an operation has adopted the Program for Results (PforR) instrument – a new lending tool that aims to better link loan disbursements to tangible results on the ground.

The program supports the Hua Xia Bank, a government-designated commercial bank, to provide financing for enterprises to reduce air pollutants and carbon emissions by increasing energy efficiency, investing in clean energy, and tightening air pollution control, with a focus on Jing-Jin-Ji and the surrounding provinces of Shandong, Shanxi, Inner Mongolia and Henan, to support the government’s Air Pollution Control Action Plan.

Coal is the single-largest source of air pollutants and greenhouse emissions in China. The country heavily relies on coal to meet its energy demand at 66% of the energy mix. China consumed approximately 4 billion tons of coal in 2014— more than the rest of the world combined. Half of China’s coal is used for decentralized boilers in the industrial and residential sectors.

In China’s biggest coal producer Datong, with financing from the program, Wangping Power Company has installed two heat recovery units and a 21-kilometer heat pipeline to Huairen County. The waste heat from electrical production that was previously released into the air is captured and reused to heat homes. This has led to the elimination of 10 small polluting coal boilers that used to supply residential heating, reducing emissions of CO2 by 420,000 tons, nitrogen oxide [LP1] by over 6,330 tons and sulphur dioxide SO2 by over 13,100 tons annually. 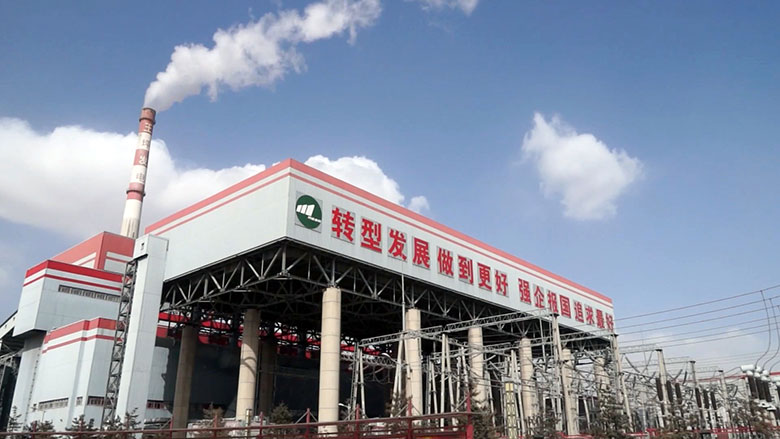 “Winter here used to be so foggy, particularly at night. The improvement of air quality is obvious,” he said.

In Yishui County of Shandong province, Qingyuan Food Company makes noodles, biscuits, corn starch and other food products, while its power and heat plant also provides winter heating to local residents and steam to smaller enterprises in addition to meeting its own needs.

Financed through the program, the company has increased its co-generation capacity and efficiency to provide heating to 300,000 people and 160 small enterprises in the northern part of the county, eliminating 35 small inefficient and polluting coal-fired boilers. Co-generation means production of power and heat at the same time.

The company has also undertaken a desulfurization and denitrification upgrade for their four coal-fired boilers, adopting the most advanced dust removal technology with efficiency up to 95 percent.

An online monitoring system is connected directly to the provincial and municipal environmental departments, enabling them to monitor and check emission data via computer or mobile phone anytime anywhere. 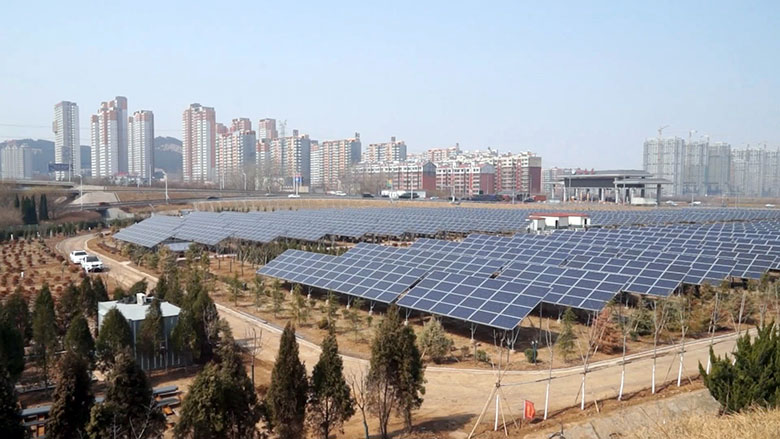 Solar park at a highway roundabout.

Use of clean renewable energy such as solar and wind is another effective solution to air pollution caused by fossil fuel.

China has the largest solar PV capacity in the world. The country has deployed 130 GW of photovoltaic (PV) capacity by 2017. However, the development of distributed solar PV is facing two main constraints – difficulties in access to financing and rooftop space.

In Jinan, the capital of Shandong Province, a highway-operating company has found a creative solution to the problem. It has installed distributed solar PV systems in the open space along highways, in the roundabouts and near tunnel exits, and on the rooftops of toll stations and rest areas. The electricity produced is sold to the state power grid.

“Up to date, we have built six solar PV stations with total generation of over 11 million kilowatt hours and CO2 reduction of over 11,000 tons since June 2017,” said Han Shaoqing, Deputy General Manager of Shandong Transportation New Energy Company.

Last December, the company also opened the world’s first solar highway for testing. The one-kilometer highway contains over 10,000 photovoltaic panels which catches sunlight and converts it into electricity. Energy collected can melt the snow on road in winter, making driving safe. Electric cars will also be able to recharge wirelessly while driving on it.

Since its launch in September 2016, the Innovative Financing for Air Pollution Control in Jing-Jin-Ji Region Program has made good progress.

“The program has financed 13 subprojects with a total investment of $660 million, including $290 million from the World Bank and the Hua Xia Bank,” said Zhang Yongmiao, Director of Hua Xia Bank’s Green Finance Center. “These projects have achieved good benefits by reducing coal consumption by 560,000 tons and a significant amount of sulfur dioxide and nitrogen oxide.”

With support from the program, the Hua Xia Bank has established a new green finance center in December 2016, tasked with investing in green financing.  A grant has also been provided by the Global Environmental Facility (GEF) to support implementation of the program with a focus on improving the results measurement and verification system, building capacity, and developing innovative financial products.

The Hua Xia Bank has mainstreamed green finance in its corporate business development strategy, in the hopes of becoming one of the leading financial institutions in this area. Its Green Finance Center expects to finance at least RMB150 billion, or more than $20 billion, in green lending by the end of the program’s implementation in 2022.

“The scaled-up green finance investments under the program have leveraged five times the World Bank loan. The program is making significant contributions to the blue skies in Jing-Jin-Ji. The program also has important climate change benefits, with reduction of CO2 emissions by 1.54 million tons per year, equivalent to avoiding nearly 10 GW of new coal power plants over lifetime of the investments,” added Xiaodong Wang, Senior Energy Specialist and task team leader of the program.