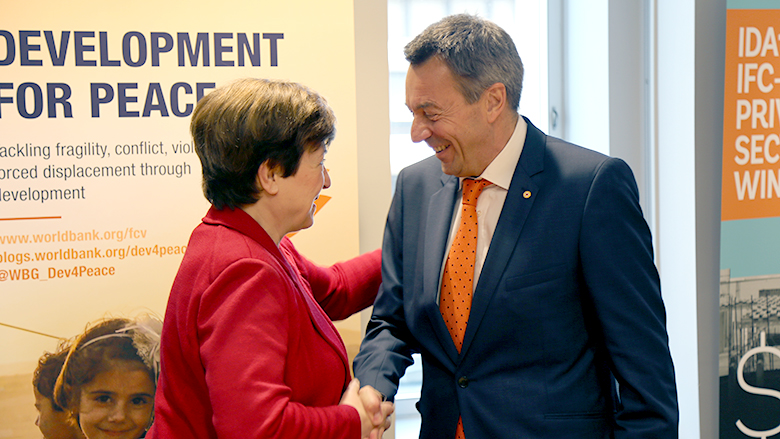 Washington, May 9, 2018 - The International Committee of the Red Cross (ICRC) and the World Bank met today to establish a strategic partnership focused on improving support to the millions of people living in extreme poverty and suffering from the impacts of fragility, conflict and violence (FCV).

Since 2010, the number of major violent conflicts has tripled, and by 2030, projections show that between 43 and 60 percent of the world’s extreme poor will live in FCV settings. Recognizing the increasingly protracted nature of conflict and the link between poverty and fragility, the World Bank and ICRC signed a Memorandum of Understanding that aims to shape policies and provide a voice for the most vulnerable and neglected communities in violence-affected contexts; exchange knowledge and expertise to improve operational effectiveness; and help shape the global humanitarian and development agenda.

Violence and fragility, which can heighten vulnerability to famine, pandemics or climate change, for example – inflict hardship and poverty on communities, causing immeasurable human suffering and impeding countries from meeting their development goals.

“Responding to human suffering requires long-term vision and planning as well as experience on the ground. By sharing our expertise, the ICRC and World Bank together can advance our work to alleviate the suffering of people in conflict-affected communities,” said ICRC President Peter Maurer.

ICRC’s mission is to assist and protect people affected by armed conflicts and violence, and to promote and strengthen international humanitarian law. The World Bank seeks to reduce extreme poverty and promote shared prosperity, and is scaling-up efforts to maximize its impact in FCV situations.

“This partnership between the World Bank and ICRC is critical to make sure that we are more effective in serving fragile and conflict-affected communities, that we learn and listen as we do this work, and that we apply these lessons as we engage in some of the world’s most difficult places,” said Kristalina Georgieva, CEO of the World Bank.

The World Bank and ICRC have worked together previously to address the immediate needs of communities affected by drought, as well as to support early recovery and improved resilience to future shock.