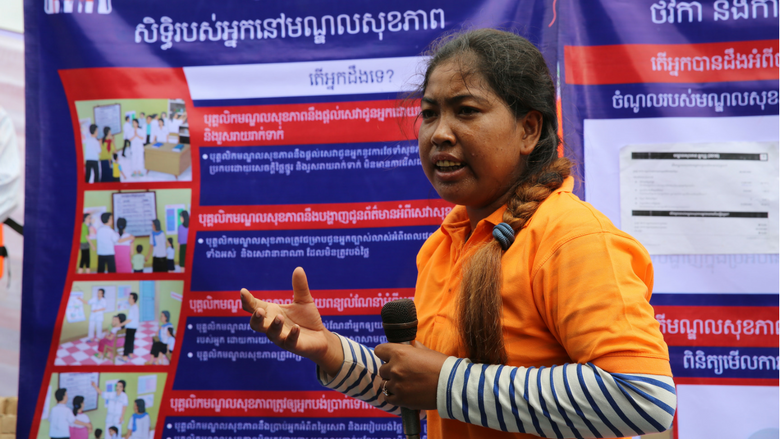 By becoming a Community Accountability Facilitator (CAF), 26-year-old Chhan Sreyden has embraced an opportunity to help improve public services in her community. Sreyden experienced bad service delivery first-hand at a local primary health center when she delivered her first child. She felt mistreated by nurses who were rude and even scolded her for being in pain during delivery.

Sreyden also knew that teachers were often absent at a primary school where her four nieces and a nephew study. The same kind of poor service was evident at her commune office. It was difficult to get documents authorized as officials were often away from the office during working hours.

Disappointed with the kind of services she had been receiving in her community, Sreyden hoped for an opportunity to help improve them.

In 2016, she attended a meeting organized by an NGO looking for volunteers to disseminate information and collect feedback on public services in Chum Tamao Commune, Memot district of Tbong Khmom province. Sreyden did not hesitate to join the project.

“I raised my hand up high,” she said. “I’ve seen and experienced many public service issues and I really wanted to change them.”

Two years on, Sreyden feels proud that her work has led to much improvement in her community. For example, she said, text books have been distributed to all grade one students and one additional teacher has been assigned for the primary school as listed in the action plans; two staff were assigned to the health center which she helped to develop a Joint Accountability Action Plan (JAAP), and the health center has medicine and faster services, particularly, when sending seriously ill patients to the referral hospital. Sreyden also noted that her commune has enough legal documents that are needed by the citizens and services are much faster.

"I raised my hand up high, I’ve seen and experienced many public service issues and I really wanted to change them."
Chhan Sreyden 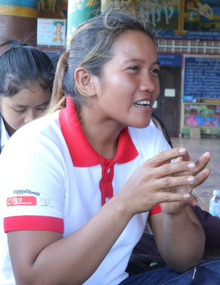 CAFs are a core element of the Implementation Plan for Social Accountability (ISAF) in Cambodia.

As a complement to government, “supply-side” ISAF activities such as the public display of service provider budgets and expenditures, the World Bank is channeling financing from the Japan Social Development Fund (JSDF) to two of five NGOs that are implementing the civil society, “demand side” of ISAF activities, Save the Children and World Vision International.

As a part of the government’s decentralization and deconcentration reform program, since 2015, ISAF has implemented social accountability activities in 75% of Cambodia’s provinces, 62% of districts and 56% of communes.

Seng Bunthoeun, Da Commune Clerk of Memot district in Tboung Khmom province, appreciates the work done by CAFs because they help community members get what they want. He said that priorities from a community scorecard of commune services were put into JAAP and subsequently implemented, including an increased presence of commune members during work hours and improved toilets at the commune office.

Mor Pheara, Head of Da Health Center, said the community scorecard and JAAP priorities enabled her to secure more resources from the Ministry of Health. “Based on the community scorecard, we requested additional staff,” she said. A total of 10 health staff, including three that were newly-appointed as the result of citizen demands, are now working at the health center.

The project has also improved CAFs’ knowledge and skills, particularly on social accountability and facilitation. “Before I joined this project, I was just a regular person,” said Doung Sokna, a CAF in Kampong Have commune of Kampong Chhnang province.  “This project has provided me with experience and the capability to develop myself to be a better person. I believe that one day I will achieve my goal of being a good leader for my community.”