Skip to Main Navigation
This page in:_
FEATURE STORY March 27, 2018 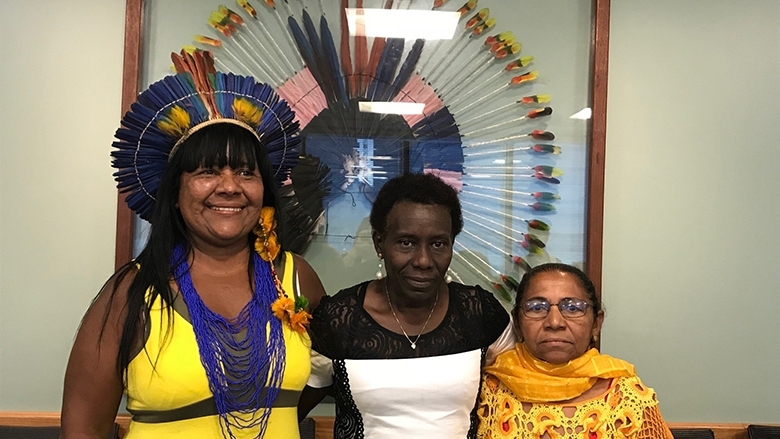 Anália, Maria do Socorro and Lucely are ready to fight for what they believe in. These three women are leaders of indigenous, traditional Brazilian communities, and have joined forces to preserve the history of their groups.

The effort has  the support of the DGM project (Dedicated Donation Mechanism for Indigenous Peoples and Traditional Communities), the Forest Investment Program (FIP), and the Climate Investment Fund (CIF - administered by the World Bank and implemented by the Northern Alternative Agriculture Center Minas Gerais). Together, the indigenous chief, Anália Tuxá; the coco-babassu breaker Maria do Socorro Teixeira Lima, and the quilombola (an expression for those descendants of escaped slaves who live in special settlements called Quilombos), Lucely Morais Pio have mobilized their communities to fulfill the dream of having their lands protected and to preserve their traditions.

The three have something else in common: their respect for the Cerrado, South America's second largest biome. From the Cerrado they obtain sustenance: Maria do Socorro from coco-babassu, Analia and Lucely from medicinal plants. For that reason, sustainable management and land regularization of their territories remain a priority for their communities. "Our goal is to keep the Cerrado on its feet, to teach people to respect nature and even to earn money from it. But always by preserving the Cerrado," says 54-year-old Lucely.

Leadership came naturally to them.

A member of the Tuxá indigenous nation, a community formed by 440 indigenous people based in the southeastern state of Minas Gerais, Anália, 54, was chosen to be a cacique, a leader who follows the customs and rituals of her people. Known for her bravery, Anália led her people in an effort to protect the 6,500 hectares where the Tuxás have been living for the past two years. "We lost our traditional territory due to the construction of the Itaparica Dam in Bahia," she recalls. "But as my father used to say, one day the mistery (enchanted spirits) would show us our new lands."

In Minas Gerais, Anália and her community were able to continue the habits of the Tuxá. "The indigenous culture is spiritual. We honor our God Tupã and the four elements of nature," she explains. As part of their tradition, they cultivate medicinal plants and produce anjuca, a sacred healing drink that the Tuxá consume during their rituals.

The land is also a source of healing for the quilombo community of Cedro, based in the municipality of Mineiros, in Goiás, in the mid-western part of Brazil. The community is led by Lucely, a former municipal teacher who was encouraged by the Catholic Church's Children Pastoral effort to dedicate her time to lead the community. "The Pastoral encourages us to work with medicinal plants. We started having meetings at home and we ended up creating the Pacari Articulation of Cerrado Medicinal Plants."

To preserve and disseminate this knowledge, Lucely created the Medicinal Plants Center, in Mineiros, which has its own laboratory and holds workshops about the Cerrado's medicinal plants.

A resident of the traditional settlement of the municipality of Praia Norte, in the northern state of Tocantins, Maria do Socorro, 66, completes the trio. She is a tireless leader, accumulating a series of positions, including being the national financial coordinator of the Coco Babaçu Intersection Movement (MIQCB), and becoming the national president of the Cerrado Network.

Her leadership is natural. "Young people used to come to my house to watch television, so I started talking to them and created a young movement. Soon I was invited to become a catechist and I also formed a mothers' club," Socorro recalls. A visit of an agent of the Comissão Pastoral da Terra was the little push that she needed to expand her work. Socorro was taken to the first rural union meeting called Primeiro Grito da Terra where she had the chance to meet illiterate rural workers. "They were very poor. I felt that I could not deny my help. "

The coco-babassu breakers needed a leader to speak for them.  They needed to preserve the coco that allowed them to live. "From the coconut, you take the almond, the oil, and you can make soap, charcoal," Socorro explains. "Everything from the babassu palm has a market, and generates money. So there is this fight for the possession of the territory." That's why someone needed to guarantee the conservation of the palm trees, which are fundamental for the sustenance of the coconut breakers. Socorro had no doubts and organized the workers, currently 400,000 of them in four states, and created the Association of Rural Workers. Today, the association is present in 12 municipalities of Tocantins, with 23 units. The work of each of them generates, on average, the monthly income of Brazil's minimum wage of US$300.