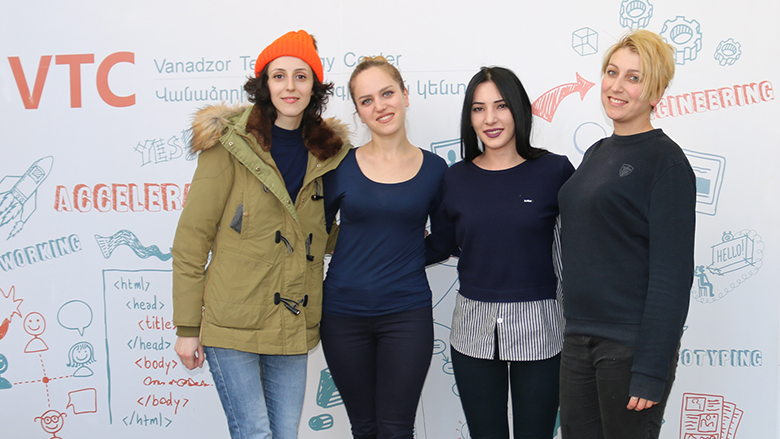 Just over two months ago, an economist, an IT specialist, a historian and a linguist teamed up at the Vanadzor Technology Center to establish a startup for developing mobile applications. Their first creation, “Digital Menu”, is an app that will help customers in restaurants and cafes to choose dishes and pay online, and it has already started attracting potential clients.

Irina Ghazazyan, a former historian, is the team lead and the driving force behind the startup. She describes how her life has taken a whole new direction since the opening of the Vanadzor Technology Center in late 2016. “We learned programming, set up our own venture, and found space for work and business opportunities,” says Irina.

Vanadzor is the third largest city in northern Armenia and the capital of Lori province. Like other urban areas beyond the country’s capital Yerevan, the city has suffered from industrial decline. Today, its landscape blighted by a huge Soviet-era chemical plant, Vanadzor experiences especially high rates of poverty and long-term youth unemployment. 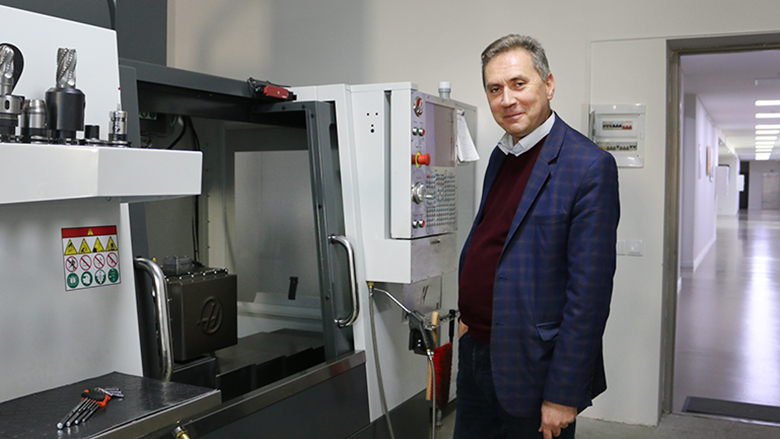 Patvakan Hakhinyan left Yerevan for Vanadzor some years ago and is today the Business Development Manager for Vanadzor Technology Center. He proudly shows visitors the Center’s labs, shares success stories, and outlines the opportunities that the Center provides to the young generation in Lori region.

“It was obvious that the Center would become an educational hub that offered consultations and workshops, and would house startups and businesses,” says Patvakan. “We are changing the profile of Vanadzor by filling the gap in the quality of IT education and providing new prospects in the city and the region.” 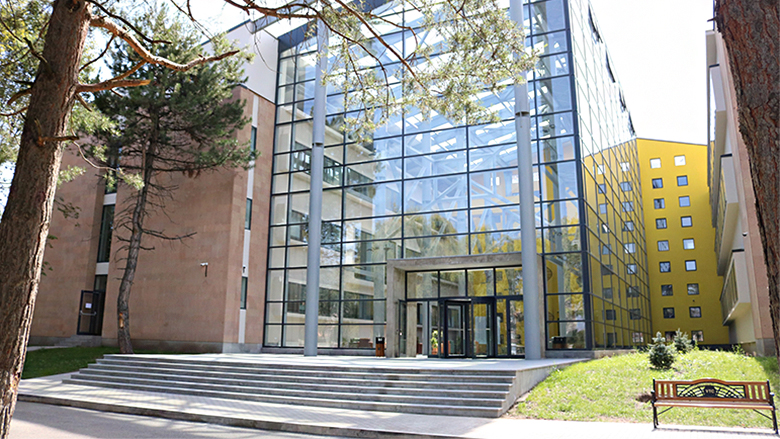 So far, eight companies have opened their offices at the Center, their work ranging from IT to architecture.

“Our training courses are identifying more and more young talent, although the companies that want to open in Vanadzor are also looking for professionals with experience. We need time and patience, but we are on the right track,” says Patvakan.

Hi-Tech Gateway is one of the pioneer companies at the Center. A branch of the American company, ConnectTo, it focuses on research and creating new technologies for the market. Svetlana Jaghatspanian, the company’s team leader, says that the possibilities and services provided by the Center can really help their business to grow. They have hired 30 people so far, while another 8 will be employed soon.

“The Center is unique for Vanadzor, as it is where young people can put their dreams into action,” Svetlana says. 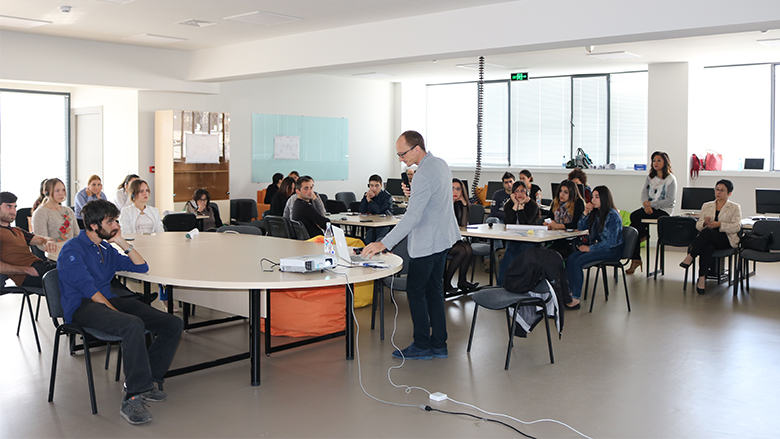 Each month, around 40 people participate in training sessions at the Vanadzor Technology Center. In addition to the trainers based there, professional trainers travel to Vanadzor from Yerevan – they discuss market requirements with participants and outline the knowledge and skills required for employability. The young students are so focused and attentive, they even turn off their phones for a while! 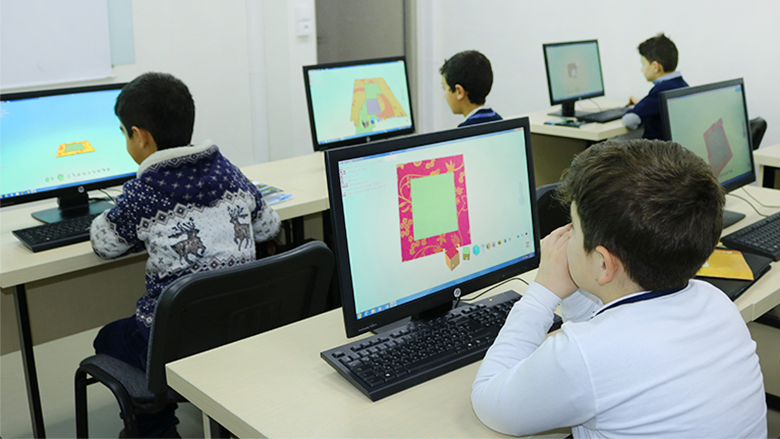 Omni Code, another growing company, provides web services and hosts workshops and training courses. “After our classes, four people got jobs, and seven more will join us in the next round,” says Yuri Virabyan, co-founder of Omni Code.

The Vanadzor Technology Center is open to anyone who is creative and wants to grow professionally – people like Babken Mkhitaryan and Arman Vardanyan, each of whom has a space and a computer at the Center. “We are working on an app that will connect taxi services to their customers,” says Babken. “This will be a more competitive, multifunctional and comprehensive app than the ones currently available on the market.”

The Center is a safe, supportive and fun environment where young people can come together as a community to learn and explore opportunities for future employment. Starting from the age of 10, children can learn the basics of programming. Almost 3,000 students from the region have so far attended these classes. 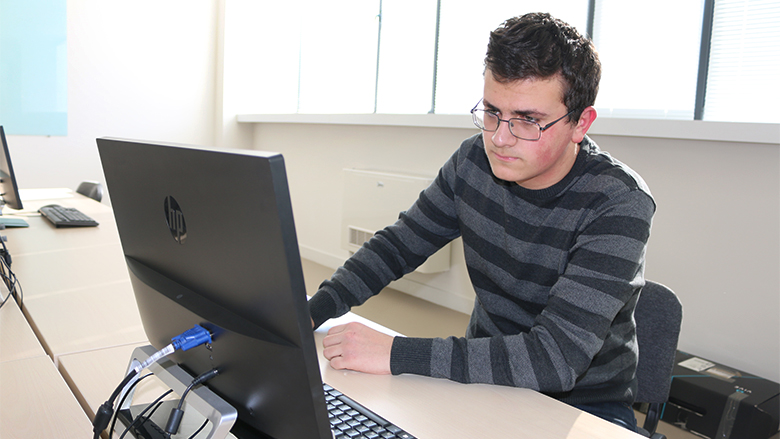 Vahe Aloyan is a 16-year-old high school student and he also works for the company X-Tech. A true polyglot, he knows eight programming languages. At the age of 14, Vahe designed his first game and won a contest organized by the Vanadzor Technology Center. His second game won an award for best design.

“My desire is to work for a company that produces only games,” Vahe says. “But my biggest dream is to see the gaming industry in Armenia fully developed and supporting the economy.”

In Shirak region, the Gyumri Technology Center (GTC), established four years ago with support from the World Bank’s E-Society and Innovation for Competitiveness project, has been very successful. Currently, the GTC houses 28 companies with over 200 employees and up to 2,000 students, and has business connections with over 10 countries. It is not a local phenomenon, but a regional IT hub.

The Vanadzor Technology Center could follow the same path to success.

Both Technology Centers demonstrate the empowerment of regional development beyond the capital city, and wide-ranging decentralization of the IT industry to the provinces. The right mix of skills and talent is being created locally and nationally, through investments that are economically and socially rewarding.