A Stepping Stone to Job Creation 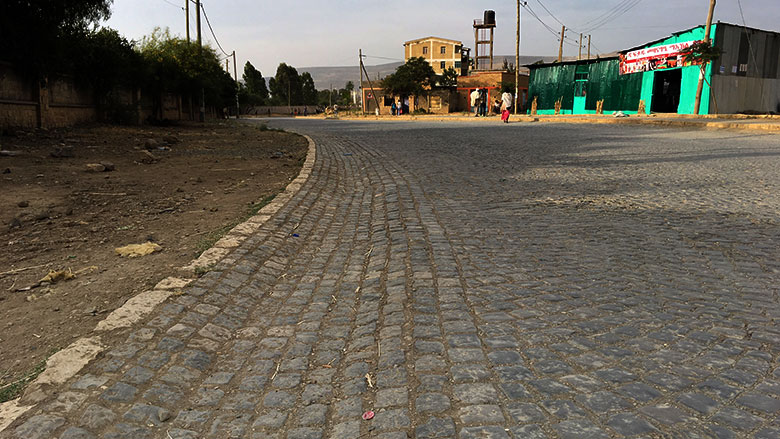 A project that set out to improve urban infrastructure generated jobs through paving roads.

ADDIS ABABA, December 11, 2017—Ethiopia is going through a major demographic transition: Over 70 percent of the population of about 100 million is under 30, with the 15 to 29-year age group now accounting for more than half of the country’s working age population. This means Ethiopia’s labor force has doubled in the past 20 years, and it is projected to rise again—from the 33 million it hit in 2005, to 82 million by 2030.

The sheer size of human capital this represents provides Ethiopia with enormous productive potential of the sort that could allow it new levels of prosperity. But youth bulges can be a mixed blessing. Having large numbers of youth in not-so-rich countries puts greater pressure on the economy to provide basic services and infrastructure, and spurs mass migration (both internally and globally). In a context of fragility and conflict, this can trigger political and social unrest.

One remedy is to get young people employed, and not just in any job, but in decent jobs which use their potential fully and bestow a sense of self-worth.

Often the reality in developing parts of the world though is that young workers are subjected to worse labor market outcomes: in Ethiopia, young people are less likely to be in the labor force in the first place (as employed or unemployed people looking for work); less likely to be given work/a job when they are part of the potential labor force; and to earn less even when they are employed.

In 2013, 29 percent of young Ethiopian workers earned money that kept them below the poverty line, for example, compared to 13 percent of older cohorts of people. Young female workers are worse off in every aspect mentioned above. This employment trend has to be taken alongside the rapid rate of urbanization in Ethiopia today.

The World Bank’s Urbanization Review (October 2015) indicates that, at 5.4 percent a year, the country’s urban population is expected to triple by 2034. Ethiopia will find well-functioning cities essential if it is to reap its demographic dividend and avoid “agglomeration diseconomies”—or the inefficiencies that can result from a large number of companies, services, and industries existing in close proximity to one another. 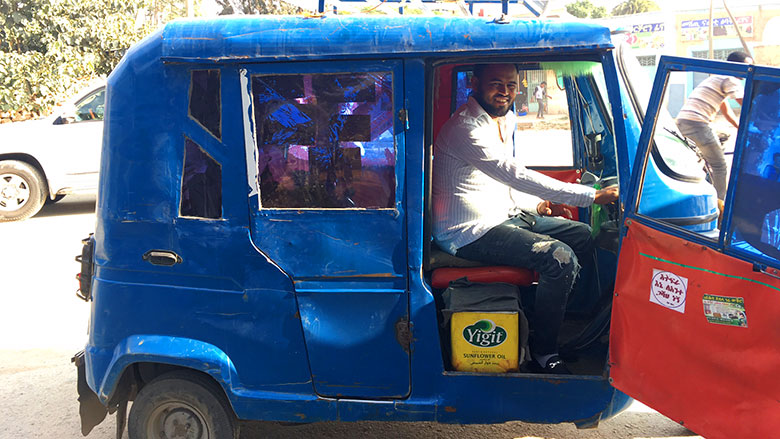 Local people who labored laying cobblestone invested their pay in new businesses of their own.

Unemployment in Ethiopia is still, by and large, an urban phenomenon. In urban Ethiopia, 15 percent of households say they contain one unemployed adult, as opposed to fewer than 5 percent in rural areas, and the number is as high as 23.5 percent in Addis Ababa, the capital city (Economic Update, 2016).

In urban centers of emerging economies where a formal private sector is not yet well-developed, self-employment offers an attractive option, especially for those with lower educational levels but high entrepreneurial abilities. Ethiopia’s recent Growth and Transformation Plan II (GTP II) lays out its overall economic development strategy, emphasizing the role of micro- and small-scale enterprises (MSEs) in creating jobs and boosting local economic development.

However, aspiring entrepreneurs face hurdles to starting a business, be they access to finance, the lack of relevant skills, unaffordable work premises, or limited market penetration.

The Second Ethiopia Urban Local Governance Development program (ULGDP II)—a Program for Results co-financed by the World Bank and the Government of Ethiopia—was not initially intended to create jobs but to improve the institutional performance of urban local governments in developing and sustaining their infrastructure and services. But labor-intensive, cobblestone road sub-projects financed under ULGDP II—the largest single infrastructure expenditure item in most cities—are creating job opportunities for unemployed youth. (Laying cobblestone is a longstanding practice, once common in Europe, of paving city streets by hand with individual pebbles or rocks, packed tightly together.)

Here is how it works: Instead of handing over the urban infrastructure to private contractors, which is what is conventionally done, ULGDP II cities mobilize the unemployed to do the cobblestone work. ULGDP II cobblestone projects distinguish themselves from traditional public works: first, beneficiaries are not paid on a fixed daily rate, but for how much they do. Second, the purpose cobblestone work serves goes beyond direct livelihood support—essentially, it gives the unemployed a head-start in self-employment, through an injection of seed capital (money in their pockets).

Thus, with other support too, former cobblestone workers are fast tracked for entrepreneurship. The evidence is as yet anecdotal, but a World Bank team that visited several participating ULGDP II cities and met with many former cobblestone workers, found they had moved on to sustainable self-employment, examples of which include running shops, bajaj driving (tuk-tuks or three-wheel taxis), brick-making, and going into urban agriculture (Figure 1-4).

Since the launch of ULGDP II in 2014, a total of 400,000 employment opportunities have been created in the cities where the project is being implemented.

It would be too far-fetched to say that public-funded, labor-intensive infrastructure is a solution to urban unemployment, but the experience from ULGDP II suggests such projects have the potential to be a springboard for unemployed urbanites, where the supply of waged jobs is limited. The cobblestone package, through a combination of training (focused on financial management and bidding) and the practical experience of working in a cooperative, prepares youth financially and mentally for self-employment post-public-work.