Zakia, a resident of Ulmarab village in Nahri Shahi district of Balkh Province, is the only woman in her village to own and manage an independent production unit. She is hailed as an example of economic empowerment by her community. There was a time when she was not able to earn enough to put on the table. However, now with support from the National Horticulture and Livestock Project (NHLP), she received technical training and resources to establish a mushroom production unit. NHLP is assisting farmers to adopt improved practices to increase horticulture productivity and deepen economic traction. It has improved livelihoods, access to incomes, and nutrition in northern Afghanistan.

NAHR-E-SHAHI DISTRICT, Balkh Province – A gas lamp emits a dull glow in the otherwise dark, gray room. The room is humid and climate-controlled, heavy plastic bags hang from ropes dangling from the ceiling in neatly ordered, straight lines. Zakia, 24, wearing a special mask, is examining the bags and notices mushrooms sprouting in some of them. Carefully, she makes tiny holes in the plastic to take the mushrooms out.

“This dark room has brought light to my life, it has given me the opportunity to earn a living,” Zakia says. She is one of thousands of beneficiaries of the kitchen gardening scheme under the National Horticulture and Livestock Project (NHLP). “I was without a job and dependent on others, but NHLP helped me and many other women in our village to become financially independent and self-sufficient,” says Zakia, who had recently established her mushroom production unit with NHLP support.

Zakia, who supports her family of seven, lives in Ulmarab village, Nahr-e-Shahi district, in Balkh Province. She also maintains a kitchen garden in a micro-greenhouse, one of the other activities supported by NHLP, but that did not generate enough income to meet her financial needs.

To set up the mushroom production unit, Zakia was given technical training as well as resources by the Ministry of Agriculture, Irrigation and Livestock (MAIL) under the NHLP. She has not only learnt the production process but has also mastered the art of developing and tapping the market. She sells mushrooms to her neighbors and nearby shops, and supplements these sales with vegetables from her kitchen garden, pitching herself as the one-stop supplier for garden produce.

She is the only woman in her village to own and manage an independent production unit, and is hailed as an example of economic empowerment by her community. Her life has changed and her dreams have grown. “I want to expand my work in the future, in addition to encouraging more women to start production or small businesses of their own,” she says.

Najia, 45, another beneficiary from Ulmarab village, received training on how to cultivate vegetables and was given resources to build a micro-greenhouse. “I was a housewife before the kitchen gardening scheme,” says the mother of six, “I never had enough money to buy vegetables and did not know how to cultivate them in my yard.”

Supplemented with grants of seasonal vegetable seeds, Najia quickly ensured nutritional and economic self-sufficiency for her 10 family members. “I cultivate leek, onion, cress, celery, carrot, and other vegetables. I used to buy vegetables from the shopkeepers, but now I produce for myself and also sell to them,” she says.

"This dark room has brought light to my life, it has given me the opportunity to earn a living. NHLP has helped me and many other women in our village to become financially independent and self-sufficient."
Zakia
farmer, Ulmarab village, Balkh Province 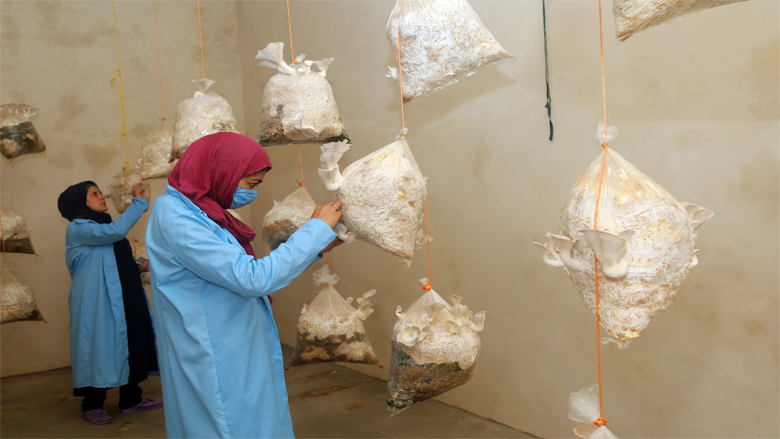 The Ministry of Agriculture, Irrigation and Livestock under the National Horticulture and Livestock Project provides resources for many rural women like Zakia, to establish a business such as the one she created - mushroom production unit.  Thousands of Afghan women like Zakia are better off and they now can earn enough to improve their livelihoods.

With a $190 million grant support from the Afghanistan Reconstruction Trust Fund (ARTF), NHLP is working toward the overarching goal of increased productivity and overall production of horticultural products. It began national activities in April 2013 and its work will run through the end of 2020.

NHLP activities have three components: horticultural production, animal production and health, and implementation management and technical assistance. The project aims to promote adoption of improved production practices by target farmers, with gradual rollout of farmer-centric agricultural services, systems, and investment support across the country. Its activities are currently implemented in 300 districts in 31 target provinces, numbers that may grow as conditions warrant.

java.lang.StringIndexOutOfBoundsException: String index out of range: -1