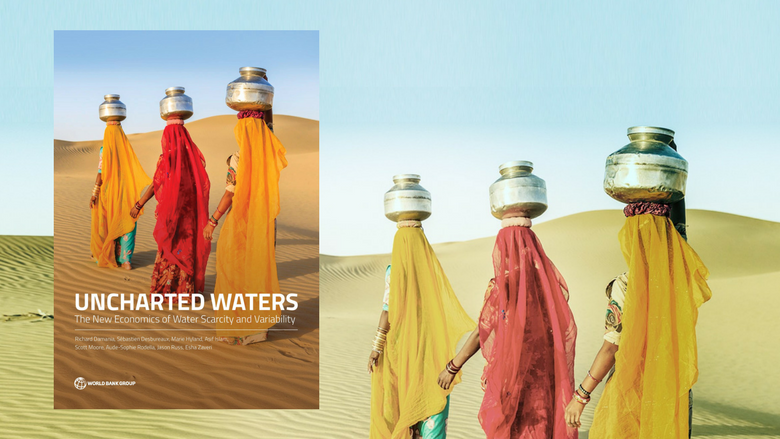 Download the Report Uncharted Waters: The New Economics of Water Scarcity and Variability

The new report Uncharted Waters: The New Economics of Water Scarcity and Variability looks at how the increasing number of droughts and floods impact farms, firms and families in ways that are far costlier and longer lasting than known before. New research shows that while the consequences of drought are often invisible, they are significant and cause “misery in slow motion”.

With growing populations and greater affluence, the demand for water is growing while the global supply of water is constant, causing increased water deficits especially in areas of particularly high population growth which are also often poor, fragile or in conflict, exacerbating existing problems for vulnerable populations.

To compound the problem, with climate change rainfall will become more erratic, causing more frequent and intense droughts and floods with even more damaging impacts, as seen in 2017 across the United States, the Caribbean, in sub-Saharan Africa and elsewhere.

This report shows how today’s ways of managing water are outdated and proposes solutions to help the world avoid a thirsty and uncertain future.

Since 2001, rainfall shocks have caused a loss of produce sufficient to feed about 81 million people every day, for the entire year.  That’s equivalent to the population of Germany.  Because droughts destroy crops, new data shows that farmers are forced to expand their farmland into nearby forests to grow more food.  But cutting down trees destroys watersheds, which causes rivers in the forest to dry up, decreasing the water supply that the farmers depend on.  Deforestation also destroys carbon sinks, which worsens climate change and sets in motion a negative spiral, causing more droughts.

Uncharted Waters also shows that droughts in cities are costlier than floods. For firms in cities, the economic cost of droughts is four times greater than that of floods, with even more severe and longer-lasting effects. While the damage of floods is immediate, severe and grab the headlines, the effects of droughts are silent, slow and hard to detect. Droughts mean water shortages, power outages and stalled economic momentum. And with less water there is an increase in diseases such as diarrhea.  The impacts are particularly acute for firms in the informal sector – their sales fall by around 35% and workers employed by these firms see their incomes fall.

“A drought is like an undiagnosed and untreated disease because it is less visible. A flood is like a disease that is visible and so it gets treated.  As a result, the aid comes in, the reconstruction starts, and therefore the city recovers reasonably rapidly. We are not saying that floods don’t do damage; we are saying that because it is much more visible and we know what to do, we do the right thing so the final impact is often not as great as with a drought.”

The report also finds that for far too many families, rainfall is destiny.  A dry shock in the first 1,000 days of a child’s life shapes their future.  Low rainfall leads crop failures and nutritional deficits among children. A child who suffers from malnutrition in infancy will typically not develop to her full cognitive potential and may end up also being physically stunted. As a result, the child spends fewer years in school, marries earlier and bears more children.  And it means less earning potential because of her reduced human capital. These impacts ripple through generations – the children of women who experienced drought in infancy are also less nourished and less healthy, perpetuating a vicious cycle of poverty.

Damania explains why tackling these challenges is so crucial:

“Given the magnitude of the problem, countries might grow, but they will not develop, exacerbating poverty and misery. If government policies don’t change and action is not taken, we will not reach our development goals. We will see wasted lives that don’t achieve their full potential, with far reaching human and economic implications.”

The report offers tangible solutions to face this enormous challenge:

-       For farms, the right economic signals are needed to control demand for water by incentivizing and encouraging farmers to cultivate less thirsty crops in water-scarce regions. For example, instead of subsidizing key inputs such as water, which encourages farmers to grow produce like rice and cotton in water-scarce areas, farmers can grow drought-resistant crops, which means that when a drought inevitably hits, the farmers are more resilient.

-       Safety nets such as conditional cash transfers and insurance triggered by droughts can help protect vulnerable families so rainfall shocks do not plunge households into starvation.

-       Improved urban water supply infrastructure and better regulated water utilities can increase resilience and lead to better access to reliable and safe water for both formal and informal firms in cities. This means plugging leaks and pricing water right, so it is not wasted, and possibly subsidizing water for the poorest consumers.

Such solutions need to be inter-connected and mutually reinforcing, says Damania: “These policies are essentially links in a chain. Each one must support and strengthen the others to be truly effective.  After all, a chain is only as strong as its weakest link.”

By learning from the lessons of the past and implementing these solutions today, policy-makers can help shape a future which avoids a parched path and instead charts a new course when it comes to water.