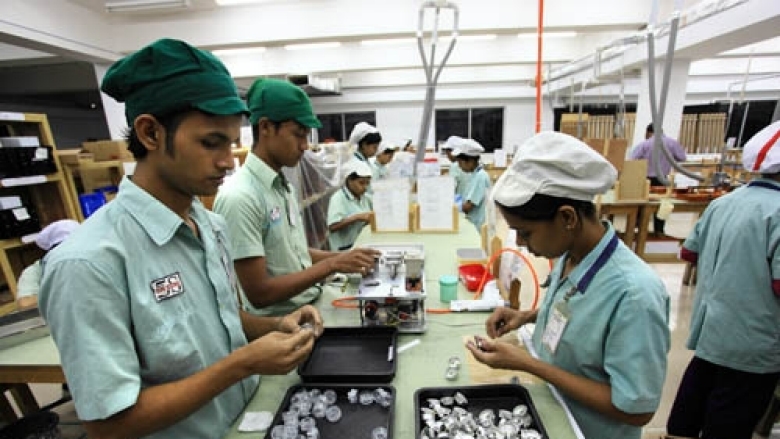 A new report says the pace of job creation has fallen in recent years and this has especially impacted women and youth in Bangladesh.

The rate of job creation has slowed down. Between 2003 and 2016, Bangladesh economy generated more than 1.15 million jobs per year, on average. However, the pace of job creation has fallen in recent years: between 2003 and 2010, the total employment grew by 3.1 percent per annum, whereas between 2011 to 2016 the total employment grew by only 1.8 percent per annum. This has especially impacted women and youth.

Low levels of technology, outdated management practices, and lagging skills of the workforce contribute to the creation of low quality jobs. The vulnerable groups are facing higher challenges to find jobs.

The export oriented ready-made garments (RMG) sector has been a critical catalyst of creating more and inclusive jobs. While other manufacturing sectors are growing rapidly to meet increasing domestic demand, export oriented sectors beyond RMG need to emerge to create quality jobs on a large scale.

-          Dhaka division accounts for 45% of all industry jobs and 37% of all services jobs. Congestion along with lack of access to land constrain firm productivity increases and expansion.

-          Microenterprises, along with household enterprises and temporary establishments, account for 98 percent of all economic units in the country and half of the jobs, which offer subsistence earnings in the absence of formal jobs. More small and mid-sized enterprises are needed for creating jobs. Regulatory barriers and access to finance hinders micro-enterprises’ growth and earning capacity.

Rise in Food Prices. Inflation is expected to be high at 6%. Severe monsoon flooding has adversely affected the livelihood of over 8 million people in 32 districts, as well as rice production. As a result, the price of coarse rice remains volatile along with factors like policy indecisiveness, increased prices in India, Vietnam, Thailand, and speculative hoarding.

GDP growth is projected to be robust, and above many developing countries in East and South Asia in FY18.  Growth is expected at 6.4 percent in FY18, driven by industry and services. Export growth is likely to pick up modestly with the expected recovery in global trade.  Remittances may turnaround, and private investments may pick up.

Challenges and structural reforms. Bangladesh still has a long road ahead. Large infrastructure projects have progressed in FY17, but key reforms in taxation and the financial sector have stagnated. Excess liquidity and non-performing loans (NPLs) in banks pose risks to macroeconomic stability. Both private and public investment is necessary for increasing productivity and employment. The country must take advantage of the global recovery to undertake institutional and market reforms, which can help sustain growth in the long term.

How can Bangladesh continue to boost economic growth?

How can Bangladesh create more, better, and inclusive jobs?