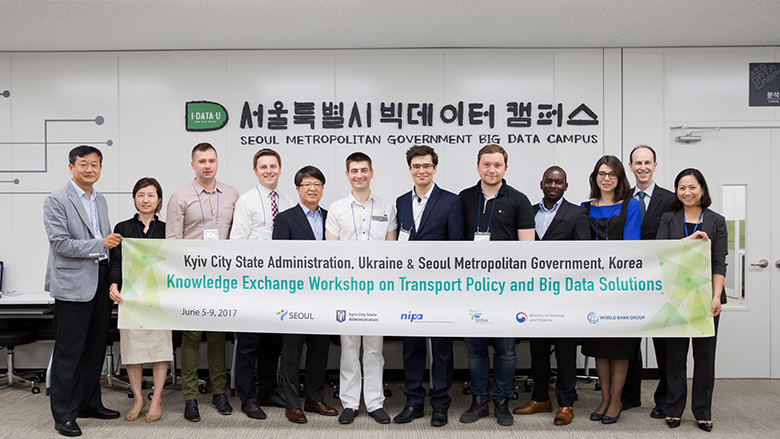 Over the past few decades, Ukraine has experienced economic progress coupled with rapid urbanization. The country’s capital city, Kyiv, has been particularly hit with traffic congestion and overcrowding in its public transport networks.

Seoul’s late night taxi service used to be difficult and expensive to use until 2013, when the city’s government began operating two pilot routes exclusively for an after-midnight service. The number of service routes soon grew to nine as city officials used big data to trace the travel patterns of late-night travelers. In collaboration with the Korean telecom company KT Corporation, the city government analyzed data from three billion mobile phone calls to identify the places in the city most frequented by citizens at night. Additionally, taxi operation data from the Korea Smart Card was also analyzed to find travelers’ specific locations of departure and destination.

Just like Seoul, Kyiv sees the value of using big data in public transportation. Currently, there are four night bus routes being piloted in Kyiv, but they are not based on any scientific modelling or analysis.

“There is a strong need for developing and implementing modern big data analysis methods in Kyiv’s transport studies,” said Mr. Yevhen Bulakh, World Bank Transport Specialist in the Kyiv Office. “Seoul’s example shows that big data from mobile devices and connected cars can help reveal public transport gaps as well as expansion opportunities for Kyiv. One option would be to combine the data from a telecom operator and the data they currently have from a bus operator,” he said.

At the workshop, participants learned that while gathering accurate data to make knowledgeable decisions regarding city transportation is important, institutional arrangements also play a crucial role. “From collecting data to storing it and analyzing it, Seoul’s implementation of a comprehensive multi-stakeholder strategy to use big data for policymaking and improving public service delivery is really impressive,” said Mr. Ievgen Petroshchuk, Advisor to the Deputy Mayor in the Kyiv City State Administration.

Kyiv recently received a grant offered by the Korea National IT Industry Promotion Agency (NIPA) to conduct a feasibility study on improving its transportation system with the help of big data. Using Seoul’s big data application and its night bus route optimization as reference, experts from the Seoul city government will carefully contextualize the modeling by focusing on the needs and circumstances of Kyiv, helping the city get on the right path for better public transportation.