Are you Afraid of Losing Your Job to Automation? 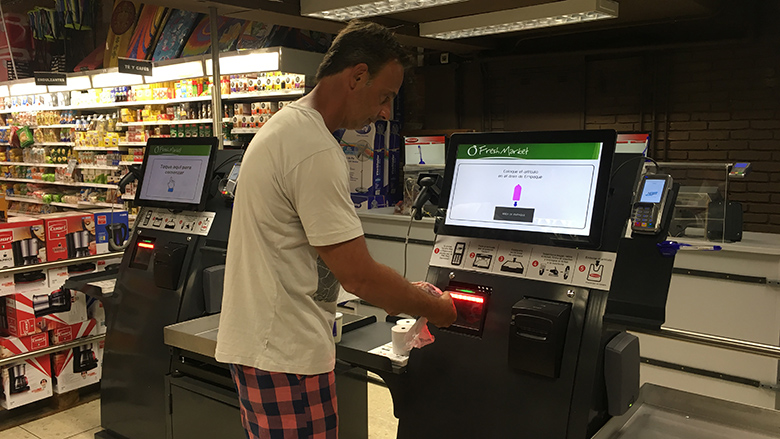 Self-checkout machines in a supermarket

Many studies predict that automation will have a major impact on the labor market. But it is not high-skill jobs that are threatened, but rather manual, routine tasks

Studies and articles that warn about the impact of new technologies on jobs have become increasingly common.  They range from apocalyptic assessments claiming that robots --whether these are large industrial machines or simple self-checkout machines-- will eliminate thousands of jobs, to those that postulate that although automation may affect certain tasks, this new scenario will imply a shift in the acquisition of skills and a change of teaching methods to adapt to the new demands of the labor market.

What can Latin America do to prepare for this scenario?

Argentina and Uruguay have experienced a shift in the profile of employment, which has changed from labor-intensive, manual tasks to more cognitive tasks. This has resulted from the current process of technological change in both countries. The main medium-term challenge centers on tasks susceptible to automation, associated with a worrying increase in technological unemployment and the ageing of the workforce.

We asked Ignacio Apella, a World Bank expert on social protection and one of the authors of the study “Technological change and the labor market in Argentina and Uruguay: A task-centered analysis,” to explain the findings from those two countries and their implications for the rest of the region.

Question. According to the report, the impact of technological change on the labor market goes beyond employment; it also affects countries with a marked ageing of the population. How is this related?

Answer. Two years ago, we began to research the economic challenges that an ageing population posed in Uruguay and Argentina. One interesting finding is that the ageing process is a limiting factor in terms of long-term economic growth. Why? Because an older population means a small number of people of working age and therefore a lower capacity to produce goods and services. A possible response to overcome this limitation is to increase labor productivity; in other words, even with a smaller working-age population, more can be produced, which can maintain GDP per capita. Following several discussions with the governments of both countries, we determined that this phenomenon is occurring with another mega-trend, which is technological change.

This has existed since the wheel was invented. The issue here is that it has been occurring more rapidly over the past 20 or 30 years. And that is a great opportunity for the countries that are experiencing an ageing process because technological change allows you to increase global productivity of the economy, which is what we want in this context.  The problem is that this great opportunity also entails major challenges due to its effects on the labor market. So, with this latest study, we tried to understand those implications, the risks and technological challenges to the labor market.

Q. Robotization has a direct impact on the labor market, which requires more qualified workers. How can we address this challenge to increase labor productivity?

A. When we talk about robotization, we are not talking about the enormous robot at Boston University; we are talking about a self-checkout machine or an online translator. When we talk about robots, we are referring to physical and digital machines. Robotization does not make occupations or jobs disappear; what it replaces are tasks that workers perform in their jobs. All workers do a variety of tasks.   Machines will replace some of them. The type of tasks that automation may replace or substitute are those characterized as routine, that have a defined set of actions that are invariably repeated and that make them susceptible to becoming automated. The risk to the labor market is the reduction in employment for these types of routine tasks. Particularly manual tasks, although cognitive ones are not exempt, in other words, those that require knowledge. In this case, I give the example of translators. The occupation is that of the translator and one of the tasks translators perform is to identify the phrase, its grammatical structure, and to translate it. This is a cognitive but routine task.  An online translator can perform this task. Digital translators now do a much better job than they did 10 years ago because they are learning patterns of behavior, which are incorporated by their users. Thus, both manual and cognitive routine tasks are at risk.

Q. What are the recommendations to address this issue and how can we guarantee that a country with an ageing working-age population is sufficiently prepared to take advantage of technological change?

A. Technological change is welcome because it enables increases in the productivity of the economy and thus generates the capacity for growth, but it can increase inequality in income distribution – unlike the first industrial revolution.  The labor market runs the risk of becoming polarized. This means that two groups of workers will remain: those who are highly skilled and who perform tasks that are not susceptible to automation, in other words, non-routine, cognitive tasks (which require critical thinking, problem-solving, creativity, innovation, interpersonal relations) and which are associated with high income. At the other extreme is the group of less qualified workers who perform tasks that are market remnants, in general, non-routine, manual tasks that are not susceptible to being automated but that generate less income. In the middle, workers of medium skills and income run the risk of being left out of the market.  This is where the middle class is, which is employed in the service and manufacturing sectors. Based on this assessment, there are two major challenges, one short-term and the other medium- and long-term but that requires immediate action, especially considering the speed at which this technological change is occurring.

In the short term, the first risk is the technological unemployment that could be generated.   Here there are two public policy alternatives to be evaluated: the first is restriction, in other words, protecting those sectors that are intensive in automation-susceptible tasks so that automation does not penetrate those sectors and therefore does not replace workers. In light of the continuous technological change, the effort needed will be continuous, as will the costs of the intervention. It has been done, there are actors in power that play and pressure and have some type of influence, but I don’t think this is an effective option in the short term. Alternatively, – and I think it is more efficient – we can improve all continuing education programs, which teach skills to young adults to enable them to adapt to the new working conditions and to perform other types of tasks that they were not familiar with.

In the long term, given that all change generates new occupations, which we cannot predict, the challenge is that we do not know how to educate today's children. We believe that it is worth rethinking the three levels of the education system - early childhood, primary and secondary - as a whole to try to determine the relevance of what is being taught and to improve the system through which it is delivered and knowledge is acquired. We need to switch from a rote learning system to one of more critical analysis. Children are still required to memorize when we actually have a 1-terabyte hard disk with more memory capacity than our own. That is the discussion we should be having. It's difficult because there are actors in the game who react, but I think it's a debate that should be put on the table.