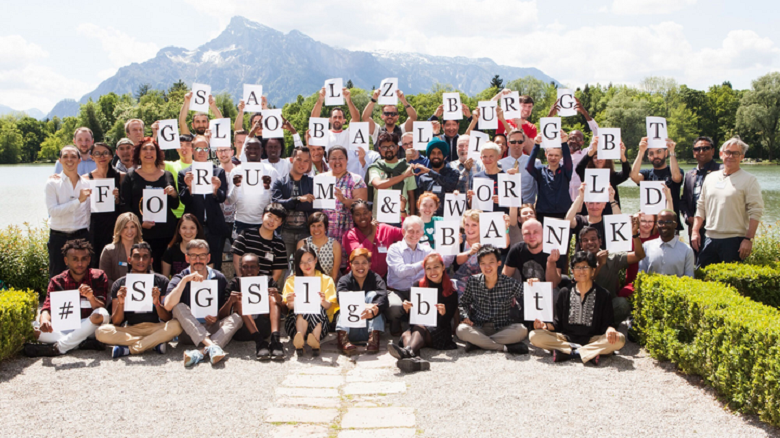 LGBT Forum participants shared the message of “Family is Love” with the World Bank in celebration of IDAHOT.

Partners mark the International Day Against Homophobia, Biphobia and Transphobia (IDAHOT), highlighting families and their LGBT* children around the world.

Being part of family is a fundamental human condition as well as a human right. All of us long to feel at home with the families of our birth, in the families of our choosing, and in the families we raise. Equally, we all have the right to live safely within the cultures and countries in which we are raised.  But being truly “at home” remains out of reach for many LGBT* people around the world. Lesbian, gay, bisexual, transgender and intersex people routinely face discrimination and exclusion from their families, cultures or even home countries. In celebration of the International Day Against Homophobia, Biphobia and Transphobia (IDAHOT), the World Bank and the Salzburg Global LGBT* Forum joined forces to call for inclusion and equality for families and their LGBT* children around the world.

The Salzburg Global LGBT* Forum, formed in collaboration with its Founder and Chair Dr. Klaus Mueller and the Salzburg Global Seminar, was established in 2013 to advance equal rights for LGBT* people around the world. The Forum currently includes members from more than 70 countries, facilitating an open dialogue on critical issues facing the LGBT* community worldwide.

For three years, the Forum has led the project “Family is…?” and for its fifth anniversary in 2017, Forum founder and chair Mueller unveiled the short film Family is…? -  A Global Conversation to coincide with this year’s IDAHOT theme of “Family”. The film weaves together personal testimonies from Forum members from more than 25 countries, that are also, in full, shown on the Forum's website.

“Family is what virtually all of us care about first and foremost. In our families, we love, we support, we depend on each other. Straight couples and families do, LGBTI couples and families do,” said Zachau. “But, in Thailand, and in so many countries around the world, too many LGBTI people still face the lack of support, even in their own family. They face discrimination and they face exclusion sometimes.”

World Bank research comparing the life experiences of 2,302 LGBTI people and those of 1,200 non-LGBTI people in Thailand, found widespread exclusion and discrimination among LGBTI individuals.

“We found exclusion and discrimination at school, at work, when going to the bank, when getting credit – in many aspects in life. That exclusion is a big problem for the people who are concerned; for the gay, lesbian, bi, trans people,” Zachau explained. “And it’s a problem for society, because society loses the contributions of LGBTI people. And when LGBTI people face such challenges where do they turn? They turn to their families and their friends first and foremost.”

The video message from the World Bank's IDAHOT celebration in Thailand for the 5th meeting of the Salzburg Global LGBT* Forum united both behind IDAHOT's message of family inclusion and reflects ongoing conversation between Cortez and Mueller on a closer cooperation on strengthening LGBT* equality through education and economic inclusion.

The World Bank’s Sexual Orientation and Gender Identity (SOGI) team has a long-standing relationship with the Salzburg Global LGBT Forum.  In addition to Cortez, who attended in both 2015 and 2016, several other members have participated in the Forum, including social development researchers Dominik Koehler (2017), Phil Crehan (2015), and Marko Karadzic (2013). Kristalina Georgieva, CEO of the World Bank, also shares a deep relationship with Salzburg Global Seminar, crediting her participation in 1990 with changing her career trajectory, from a researcher in Bulgaria going on to work with the World Bank and previous to that with the European Commission, where she was Commissioner for International Cooperation, Humanitarian Air and Crisis Response.

To celebrate these growing closer connections, and in the spirit of IDAHOT, LGBT* Forum participants shared the message of “Family is Love” with the World Bank, in support of its efforts to support greater inclusion of LGBT* people around the world.

*LGBT: Lesbian, Gay, Bisexual, and Transgender. The Salzburg Global LGBT Forum uses this term as it is currently widely used in human rights conversations on sexual orientation and gender identity in many parts of the world, but we would not wish it to be read as exclusive of other cultural concepts, contemporary or historical, to express sexuality and gender, intersex and gender-nonconforming identities.

A version of this article appeared on the Salzburg Global Seminar.