WASHINGTON, June 6, 2017—Mauritania’s fishing industry plays a major role in the country’s economy, contributing 25% of public revenue and up to 5% of GDP. The sector generates 53,000 jobs nationwide, with women performing about 30% of the work.

In the northern city of Nouadhibou, many women working in the fishing industry do so out of economic necessity. They work to provide for their families. The . Among the Imraguen tribe, for example, women are renowned for their preparation of poutargue, a type of pickled fish highly sought after in European markets.

“Because women do not fish themselves, they rarely enjoy direct access to the raw material, the fish,” says Alexandre Hugo Laure, a Senior Private Sector Specialist at the World Bank Group. “They play almost no role in the export sector, where you see the highest profits. They are only active in the local market where demand is limited and the highest quality fish are reserved for wholesalers.”

This is particularly difficult for small-scale fish handlers, who say that they are priced out of the market by wealthy wholesalers who supply to the country’s rising number of processing plants.

“We can’t even bargain with the middlemen who sell on to the factories because they know we can’t afford ice or cold storage, so we have a much stricter turnaround time,” says Kouba Taleb, a woman fish handler in Nouadhibou. “So our profits are even lower.”

These challenges are compounded by physical isolation. Nouadhibou’s artisanal market is saturated to the point that women fish sellers have no formal space for their goods and are forced to work outside the market on the street. Exposure to the elements depreciates the value of their product. They often resort to selling their goods in smaller markets near their homes where fewer buyers pay lower prices for their goods.

These poor working conditions, plus limited access to capital, land and equipment, force many women to reduce the number of days they work or to leave the fishing industry altogether.

" By incorporating business development and entrepreneurial and marketing skills, women can look beyond the short-term and expand their client base. " 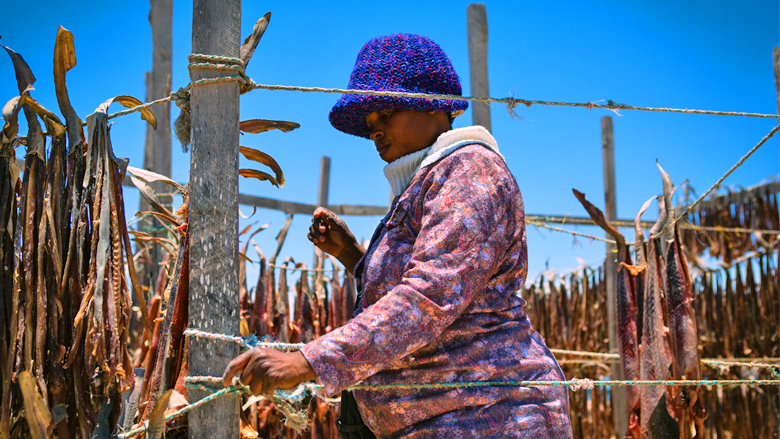 Developing new skills in fish processing and handling and in entrepreneurship

To help address some of the challenges facing women fish sellers in Mauritania, and to strengthen private sector growth and job creation, the World Bank Group is partnering with the Competitiveness Industries and Innovation Program (CIIP) on the Nouadhibou Eco-Seafood Cluster Project.  Launched in March 2016, the project aims to support the development of a seafood cluster in Nouadhibou that promotes sustainable management of fisheries and generates value for local communities. Led by the World Bank Group’s Trade & Competitiveness Global Practice, with contributions from the Environment and Natural Resources Global Practice, the project will help reinforce Nouadhibou’s port infrastructure and expand its onshore fish processing activities. In addition, targeted trainings will be implemented to help women build on their existing skills, including in processing, handling of goods, business management and marketing. The aim is to help women increase their ability to organize, formalize and grow their businesses.

“By incorporating business development and entrepreneurial and marketing skills, women can look beyond the short-term and expand their client base,” said the World Bank Group’s Alexandre Laure, who is leading the project.

According to Laure, the project will also implement an innovative Personal Initiative (PI) Training, emphasizing the importance of persistence and being a self-starter for entrepreneurial success. The training program is based on the strong results of another Bank Group-supported project in Togo, which trained more than 500 women entrepreneurs. The program found that women had more assets and employees, innovated by introducing more new products and services and were able to finance larger loans following the PI program, compared to women who benefited only from business management training.

Initiatives that develop the entrepreneurship skills required for women’s economic empowerment support the World Bank Group’s twin goals of ending extreme poverty and boosting shared prosperity. In Mauritania, increasing women’s capacity and supporting their activities in the fisheries industry offers an opportunity to resolve two of the country’s most pressing development challenges — poverty and unemployment.

“Improving organization and coordination, while guiding skill-formation to meet market demands will lay the foundations for integrating women into fisheries,” Laure says. “This will not only improve livelihoods, it will expand the Mauritanian government’s drive to generate more inclusive and diversified private sector growth.”