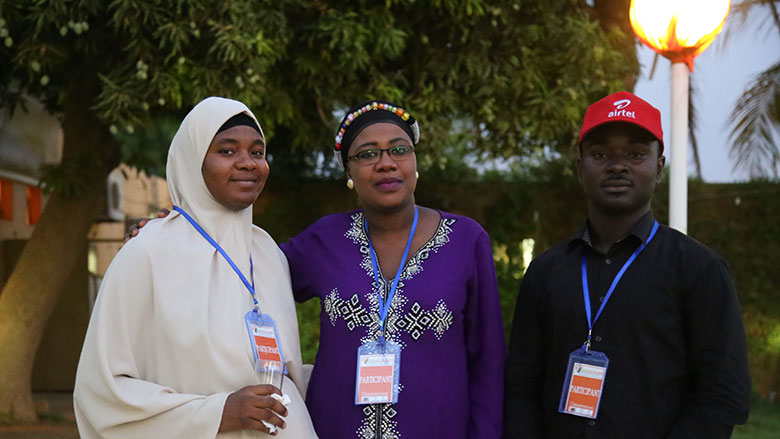 NIAMEY, May 30, 2017 - “I got the idea to create my ‘Health Coach’ application from discussions with other women. The app helps women monitor their pregnancy and the subsequent development of their children up to the age of two. In Niger, many women give birth, and it’s frustrating to know that they’re often lost and always need advice from grandmothers and older women like myself. That is why I decided to create a company and a mobile application to provide them with answers to their questions,” explained Nadia Mahamadou Touré, first prize winner of the ‘NigerAppChallenge’ competition.

Her application is certainly very useful in a country with the highest fertility rate in the world, with an average of 7.6 children per woman.

Nadia is a 30-year-old trained software engineer.  The young woman set up her company to carry out her project entitled ‘Marrainage des femmes’ (“Mothering Women”), before later developing an application devoted to maternal health.

Together with approximately 60 other Nigeriens, she has just participated in the ‘NigerAppChallenge,’ a mobile application competition organized by the Ministry of Posts, Telecommunications, and the Digital Economy with support from the World Bank, together with many other partners active in the new technologies sector, such as Orange Niger, Airtel Niger, Abdou Moumouni University, and the High Commissioner for Computer Science and new information technologies. One of the aims of this competition was to discover and promote young software developers, and provide them with training in order to encourage the entrepreneurial spirit and boost Niger’s digital economy.

Between February and March/April 2017, 61 teams had to prepare and submit their entries, which concerned diverse sectors, such as business, agriculture, health, education, and services. The 20 best projects were chosen after a preliminary round, and the selected candidates were then given several weeks of technical and management training by experts from the Small and Medium-Sized Business Incubator Center of Niger (CIPMEN).

Ten teams were chosen as finalists in a second selection round, and received coaching and support before presenting their projects in the grand finale on May 6, 2017.  Before an audience of just over 100 people, each team gave a quick demonstration of their application and answered questions from the jury.

Nadia Mahamadou Touré, who thinks that the NAC has helped her “prove that women are just as talented, even in the field of ICT,” explained: “My application may be downloaded to a smartphone. I offer three modules: prenatal consultation, managing the gestation period, and post-natal consultation. Each user has an identification number and is monitored. For example, she can know her probable delivery date and learn how to prepare the baby clothes and the delivery kit.  She can also receive SMS alerts to remind her of her medical appointments or warn her of an epidemic. Finally, the third module monitors the baby’s growth up to the age of two.  For example, we will offer cooking courses and give advice on nutrition, with videos.”

The second prize was awarded to Almoctar Seyni Moussa and his two friends, who developed the Shawara application. At just 23 years of age, Almoctar is a network administrator and is finalizing his studies in computer science and telecommunications in Cotonou, in Benin.

Shawara, which means “advice” in Hausa, a language spoken in Niger, is an education application designed to provide information to students and facilitate their orientation and administrative procedures. Almoctar’s personal experience after leaving school inspired the idea for the application: “Six months after obtaining my baccalaureate, I was still finding it difficult to get information and guidance. I had no information on universities. I thought that high school graduates should not be left to their own devices. With Shawara, our aim is to make the lives of pupils and students easier. We also want to simplify their procedures. For example, today some applicants must line up from 4:00 a.m. to register at the Abdou Moumouni University of Niamey.”

“Shawara has been around for one year. We have 15 subscribers in Cotonou and 15 in Niamey.  By June 2017, we hope to make it available on Play Store so that the class of 2017 can make use of it. The application provides guidance on 19 programs available in Africa and outlines all the details, areas of specialization, outlets, and schools where they are offered. Right now, we communicate using messaging, chats, and forums where students from 14 countries, mainly from West Africa, can have discussions among themselves. In the near future, we hope to develop on-line registration to avert the need for pre-visit trips, which generate needless expenses for students and their parents.”

“The NigerAppChallenge competition is a great showcase to get your name out and promote what you do. There are no excuses for not making a success of the digital revolution in Africa,” explained Almoctar.

And another for students still at school

The third prize went to Ecoles Infos, another education application developed by Mohamed Sedar Egnonse, Chérifatou Ibrahim Agoumo, and their team.  Mohamed and Cherifa, aged 28 and 25 respectively, are owners of the I-futur startup.

They created this application to reduce school failure in their country. As Mohamed explained: “The school enrolment rate in Niger is poor, and very few pupils manage to pursue their studies up to university level.”

“Our application makes it possible to monitor children in school to prevent them from dropping out. It consists of a web and mobile platform that allows schools to be in contact with parents.  For example, timetables and grades will be accessible. We noticed that messages are often poorly delivered by children, hence this tool through which schools send direct messages, SMS, and e-mails to parents.”

“Even leaving home to obtain exam results will no longer be necessary. We can also help parents to pay school fees by cell phone or bank card. Several establishments are in the pilot phase for the next school year.”

“The ‘NigerAppChallenge’ gave us the opportunity to learn how to draw up a business plan. Our project has got more visibility, and it is always reassuring to get advice from a multidisciplinary jury,” concluded Cherifa and Mohamed.