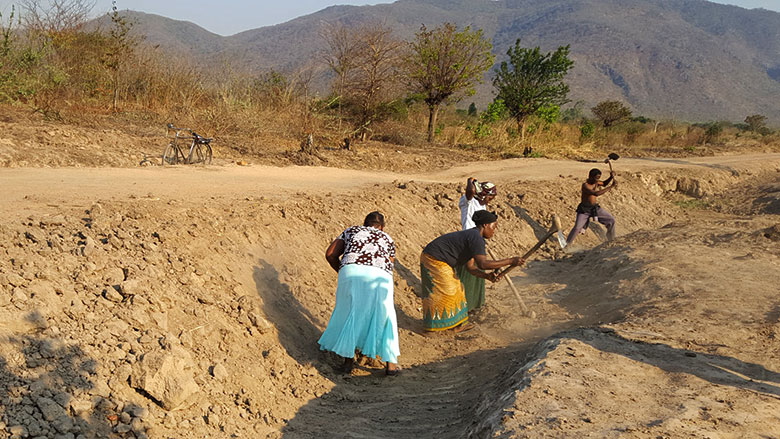 LILONGWE, May 30, 2017 - Some solutions to community problems are simple but effective. One such solution was the Public Works Programme (PWP) for road rehabilitation. This has left visible positive change in communities devastated by floods that hit Malawi in January 2015. The communities themselves played a major role in restoring the damage caused to public infrastructure in their area under the Malawi Floods Emergency Recovery Project (MFERP).

The result of heavy El Nino rains in January 2015, the floods damaged livelihoods and infrastructure in half of the country. The needs after the floods were huge: a post-disaster assessment done by the Government and its development partners found private housing constituted 35 percent of the recovery needs, followed by transport at 21 percent, agriculture at 16 percent and, lastly, water and sanitation.

Machinga District in eastern Malawi was one of the worst affected areas, with villages under Traditional Authorities (TA) Liwonde and Sitola hard hit. Communities in these villages were some of those that benefited from MFERP, which started in 2015 with US$80 million in support from the World Bank.

Through the PWP, communities either rehabilitated or reconstructed roads, bridges, and mini-irrigation schemes, earning farm inputs or cash to help them restore their own livelihoods.

Julius Magetsi of Group Village Mtila paints a picture of what the situation was like when the floods hit: “The road was completely damaged, cutting off this entire area from essential facilities. Children could not even go to school as they were barricaded by the swelling Namisengo River that they could not cross. Ambulances could not come to the village to pick or deliver patients.”

He applauded the community spirit when the chief mobilized them to work on the road. The community gathered stones, filled gullies, and raised the level of the road above the running water.

MFERP’s Monitoring and Evaluation Coordinator for the Eastern Region, Ezekiel Luhanga, said communities played a critical role in the success of the project. “So far we have done 83 road projects with full participation of local communities. As a project, we aim at restoring livelihoods through various interventions tailor-made for communities based on their need. We are glad that these programs have been well received by communities, which makes it easier for MFERP to implement them,” he explained.

Falesi Stima from Village Head Tambala’s area was able to buy food and fertilizer for the next planting season using proceeds from working on the Mtila-Tambula earth road in TA Sitola. To her, the PWP was largely an answer to her problems and those of her community. “The program boosted my household financial situation, and this rehabilitated road is a major lifeline for our village. It connects us with schools, the police, the hospital, and other important facilities,” she observed, referring to the Agricultural Development and Marketing Corporation, known as ADMARC in Malawi.

The January 2015 floods not only damaged infrastructure but destroyed farms, potentially plunging thousands of poor households into food shortages. James Chiwaya says the people of the area desperately needed inputs to put their farming lives back on track after the floods. So some opted for the Inputs-for-Assets (IFA) aspect of the PWP, under which each person received a 10kg packet of maize seed and a 50kg bag of urea fertilizer after working for 24 days.

The PWP intended to reach 180,000 flood-affected people; so far, 68 percent of them have benefitted.

But despite the success of the program on the Mtila/Tambula stretch of road, not everything was as rosy on the Kwilasha-Disi road rehabilitation project. While the PWP managed to restore the road network, the farm inputs that were given in return for labor did not achieve the results intended. This was due to the opposite of flooding; drought in the 2016 growing season scorched crops. Group Village Headman Kwilasha believes if it was not for the drought the PWP would have been a success.

Under the PWP, communities worked on tertiary roads of their choice, as per community-determined need, while Malawi’s Roads Authority managed the reconstruction and rehabilitation of tarmacked secondary roads. Out of the targeted 90 km of secondary roads, 75km has been completed.

The floods also damaged bridges. So far, about 240 meters of the 780 meters of bridges identified as needing repair (including drainage structures) have been reconstructed.