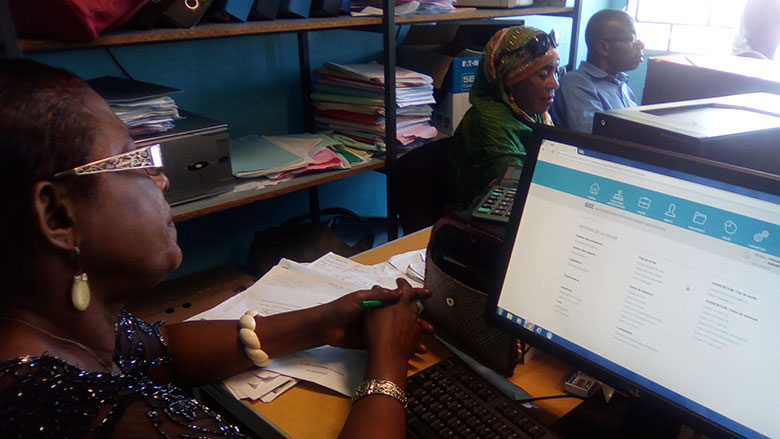 MORONI, May 25, 2017 ̶ On the Indian Ocean island of Moheli, Rakim Baco Moingarie noted with regret: “I have been here for years and I have never had access to the management framework or to the expenditure of the administration of the island of Moheli, despite the fact that I am the financial controller.”

Like the island of Moheli, Grande Comore and Anjouan have long been confronted with extensive organizational problems: bloating of the public payroll due to inefficient recruitment practices, a disorganized public service, unproductive financial operations, a lack of transparency, and insufficient funds. These are immense challenges for the Comorian Administration, which is responsible for controlling the size of the public sector, the wage bill, and the chain of expenditure of the state. (Together, the three islands make up the Government of the Union of the Comoros.)

“Public finances and the public service are absolutely essential for the development of a country, as the functioning of the state and the provision of public services to the people hinge on them,” said Anne-Lucie Lefebvre, senior public sector specialist at the World Bank and Task Team Leader for the Good Governance Economic Support Project (GGESP).

In an effort to help the country, the World Bank has been providing support to the Government of Comoros since 2011 through a grant of $1.8 million from the International Development Association (IDA). The aim? To improve effectiveness, accountability, and transparency in the management of public finances and the management of human resources and wages in the public sector.

It is against this background that the Bank’s Rapid Results Initiative (RRI) was launched in 2016 to also give strong support to the three governorates and the Union of the Comoros to reform the management of the workforce, payroll, and chain of expenditure.

Since that time, two computer systems have been brought on stream. The GISE software (integrated system for managing employees) facilitates the payment of wages to all public servants; and the SIM_BA system integrates all budgetary expenditure and income.

In addition, officials from various bodies (the Public Service, budget, financial control, and Public Treasury) have received training to improve their capacity in public administration and finance. RRI coaches Hassani Malik, Anwadhui Mansour, and Helmi Youssoufa, have been assigned to each governorate, as well as Said Mahamoudou, a social anthropologist.

“It was a difficult, but very enlightening experience. The public officials involved in carrying out these reforms were not in the habit of working together and, at the start of the process, they ignored each other and shifted responsibility from one to another,” said one RRI official.

“But with perseverance and the active involvement of senior officers, the governors themselves, members of civil society and the Council of Elders, they were able to overcome their areas of disagreement and their reservations, and began exploring new ways to iron out the difficulties they had encountered in the computerization phase,” he added.

“Most of them had to put in many hours of overtime,” he noted.

By the end of December 2016, all public sector wage payments for the Union of the Comoros, Grande Comore, and Moheli were handled in the same way by the GISE system, while only 14 officials (0.3 percent of the workforce) were still receiving payments manually on the island of Anjouan.

“We knew we had achieved a part of our objective when the new Accountant General took the initiative to apply the new ministerial order prohibiting all payments outside the GISE system. He decided that, with effect from November 2016, the Treasury would no longer handle manual wage payments.  This required an enormous effort to digitally register all public servants before December 25.  But we did it,” said Hassani Malik, RRI coach in the Union of the Comoros, with satisfaction.

The budget execution reports were also subject to controls, and were prepared and published for 2015 and 2016, a first for Comoros. There are visible changes in the way state officials operate. In just seven days, 1,497 employee files were entered in the system.

Abdou Djabir, Commissioner of Finance for the island of Moheli, said he now knew “the exact amount of expenditure on wages and public goods, whereas before, I didn’t.” And Fatima Said Ali, public service director in the island of Anjouan, said work previously done by the Budget Department was now being done by hers, as it should have been before.

The successful implementation of the GISE and the SIM_BA cannot be attributed entirely to the RRI method, introduced in collaboration with the World Bank, or solely to the willing attitude of the public officials, but also to the active involvement of members of civil society and the islands’ Council of Elders.

A number of related initiatives are coming on stream: these include the Citizen Initiative on Budget Transparency (ICTB), as well as programs with the media on budget transparency, the publication of regular communiqués to strengthen participation in the budget monitoring process, and mobilization and sensitization campaigns.