Timor-Leste: A safer highway means a better cup of coffee

Coffee is a central part of Timor-Leste’s economy and culture. Yet Timor-Leste’s coffee industry has been hampered by poor transport infrastructure. Find out how the 110 kilometer Dili to Ainaro road rehabilitation will improve the lives of coffee farmers and others living in rural areas of central Timor-Leste, whose incomes and access to vital services are directly impacted by the condition of the road.

Dili, 18 May 2017  - “Ita gosta hemu café?” (Do you like to drink coffee?) is a standard greeting when visiting a Timorese home, given that 25% of all households in Timor-Leste grow their own coffee. And drinking fresh coffee in a Timorese home is quite an experience: always strong, black and loaded with sugar, with thick coffee grinds settling in the bottom of the cup.

Yet this experience is moving beyond Timor-Leste’s shores. In upmarket cafes around the world, Timor-Leste’s rare Arabica/Robusta hybrid coffee variety, Hibrido de Timor is now becoming much sought-after for its quality, with exporters prizing the coffee for its productivity and resistance to disease.

The coffee industry is a central part of Timor-Leste’s economy, society and history having been a valuable source of employment and income for over a century, and is considered one of the key economic growth areas that will help reduce the country's reliance on oil and gas revenues.

The Dili-Ainaro Road could – or should – be the road to opportunity for the thousands of families who rely on coffee to make a living. It provides the main trade route for coffee farmers to get their crop to the markets in the capital, Dili or beyond; to export overseas from Dili’s bustling sea port.

Yet after decades of little maintenance the narrow, winding and potholed Dili-Ainaro road – depending on the time of year – varies from bearable to almost unpassable. During the wet season (generally December to April), heavy tropical downpours can cause mudslides, blocking sections of the road, or washing away entire sections. 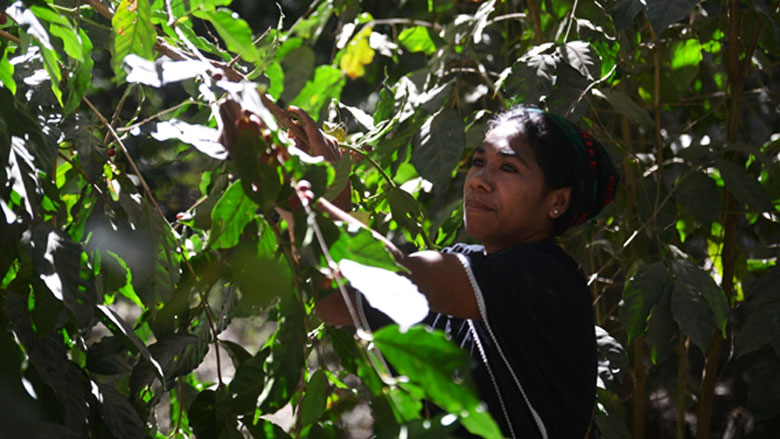 Anarela Mendoça, a coffee farmer from Timor-Leste central highlands, picking the prized Hibrido de Timor beans from her trees. These beans are then processed near her farm, for transport to the capital Dili, and beyond.

World Bank/Tom Perry
" Coffee is really important for our family. [But] the road is so bad; it's hard for a vehicle to reach our place. If the road is bad we are suffering, because it’s really hard to get the car coming to our village. If the road [was] better, then we can load our produce onto the car, and we will be very happy. " 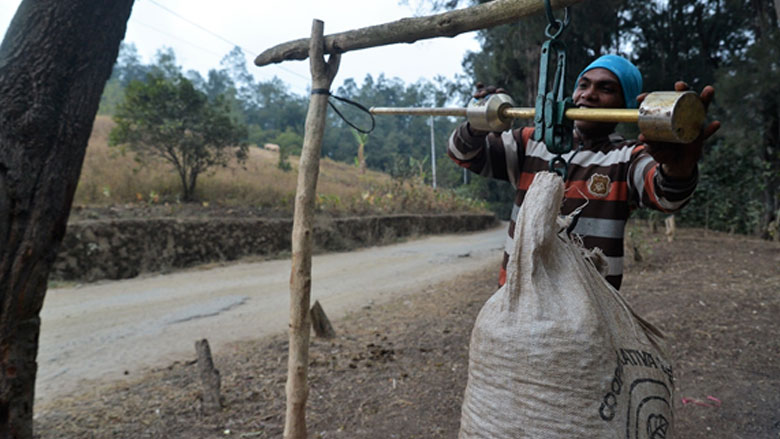 Fresh coffee beans from Timor-Leste’s central highlands are weighed along the side of the Dili-Ainaro Road.

For people like Anarela Mendoça, a coffee farmer and mother of four from Aileu district, the Dili-Ainaro Road is essential to her family’s livelihood, and the extremely rough travel conditions affect the longevity of trucks used for transport, and the quality of the beans that they are bringing to market.

“Coffee is really important for our family,” says Mendoça. “[But] the road is so bad; it's hard for a vehicle to reach our place. If the road is bad we are suffering, because it’s really hard to get the car coming to our village. If the road [was] better, then we can load our produce onto the car, and we will be very happy.”

Fortunately for farmers like Anarela, change is happening. The US$149.1 million World Bank-led Timor-Leste Road Climate Resilience Project is one of the most significant transport projects ever undertaken in Timor-Leste. More than 33 kilometers Dili-Ainaro Road have already been rehabilitated through the project, with work now well underway on the 55 kilometer stretch between Aileu and Ainaro. The upgrades and improvements are extensive; with the road being upgraded to withstand heavy rains and better adapt to Timor-Leste’s changing climate, with stabilized slope structures and improved drainage to reduce flooding and water damage. Pavement marks and road signage have been added to improve road safety for users and communities along the corridor. Construction is expected to be completed by mid-2018.

With the first section between Dili and Laulara now complete, travel times have improved by 40%. The project is already having a massive impact on the lives of those living in rural areas of central Timor-Leste, whose incomes and access to vital services are directly impacted by road conditions. Hospitals and schools are now more accessible, and farmers of vegetables, fruit – or coffee, like Anarela Mendoça – will be able to improve their incomes by having better access to local and regional markets.

“If the road is good, there will be trucks coming in,” says Anarela. “We can transport the coffee, and we’ll be very happy.”

The Timor-Leste Road Climate Resilience Project is funded through the International Development Association (IDA), together with the Government of Timor-Leste.