Young and Pregnant: Reducing Teenage Pregnancy and Improving Food and Health in Zambia 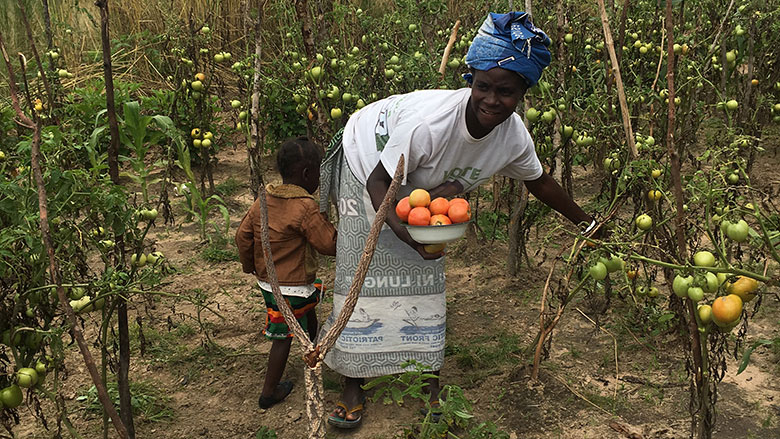 LUSAKA, May 16, 2017 – As a vibrant teenager pursuing her studies in Western Zambia’s Kaoma district, 16-year-old Prudence Makufeni suddenly faced a life-changing situation: pregnant, she dropped out of school and followed the path that many around her had also taken – teenage motherhood.

Prudence gave birth to twin boys, doubling her responsibilities as a new mother. She didn’t know how to feed them well and, as a result, her babies “were underweight” and frequently suffered from diarrhea.

She has since been taught by the Female Youth Livelihood and Nutrition Enhancement Project (FYNEP) how to prepare nutritious food, and how to cultivate fields of maize, sweet potatoes, and tomatoes. “I have food from the garden and some income from my garden produce,” she recently explained.

Prudence is among the 24,600 young girls and women currently benefitting from the FYNEP.

Judith Sinabu is another beneficiary who dropped out of school in Grade 11 because of pregnancy.  She says the project has helped increase her awareness of what services are available for her and her child, as well as the importance of preventing anemia by taking iron or folic acid supplements and deworming tablets, eating iron-rich foods and using a mosquito net.

She is also happy she has access to youth-friendly reproductive health services. Had she known about them earlier “I don’t think I would have been pregnant with my second child,” Judith said.

Advice on nutrition for mothers

The Acting District Commissioner for Kaoma in Zambia’s Western Province, Sichibuye Mwanagombe, is extremely keen on the FYNEP and the support it provides. “Many families in Kaoma appreciate the knowledge and skills that the girls are acquiring from the project,” he said. There were fewer undernourished children as a result.

Western Province is vulnerable to flooding and drought, extremes of weather that its population of subsistence farmers has little capacity to cope with. The food shortages that result from these aggravate the poor nutritional status of many households, as does the region’s poor access to basic services.

This particularly effects women, and the World Bank is helping address this through the FYNEP in both Limulunga and Kaoma districts.

The FYNEP is a unique, multi-sectoral project integrating interventions in agriculture, nutrition, and health to prevent undernutrition in mothers and children in rural communities in Zambia. The project is designed to reach vulnerable young women and girls during the critical nutrition window from pre-conception to birth to improve their outcomes in terms of maternal, fetal, and child health and nutrition.

The project says it has increased the consumption of micronutrient-rich foods for young girls and women in Western Zambia. Through it, households have managed to diversify the types of food they produce, making food available year-round and giving them access to important micronutrients.

Plus advice on farming and other life skills

The project is supported by the World Bank with funding from the Japanese Social Development Trust Fund (JSDTF). It has three major components: health and nutrition, agriculture, and life skills come together to form a multi-pronged approach to address the causes of undernutrition.

The project is implemented by Concern Worldwide Zambia, and covers the period July 2015 to June 2018.

The causes of undernutrition are complex, related to disease and food intake but caused in turn by food insecurity, inadequate care and feeding practices, poor access to basic health services, and unhealthy household environments.

According to the demographic and health survey (2013-2014) 29% of girls age 15 to 19 in Zambia are either mothers already or pregnant with their first child. Teenage pregnancy is much higher in rural areas (36%) than in urban areas (20%). Zambia’s North-Western Province has the highest rate of teenage pregnancy (41%), followed by Western Province (40.4%). Its lowest rates are in the more industrialized Copper Belt, where teen pregnancy stands at 16%.

As a country, Zambia has high rates of chronic malnutrition (40%), high early childbearing, and high gender inequality. Reaching young women and girls and improving their nutrition is seen as essential to reducing poverty.