Taking a Leap Towards a Digital Future in Pakistan 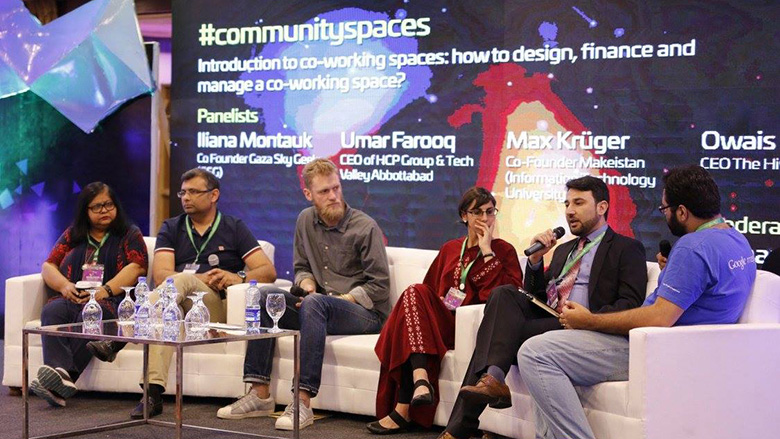 Speakers from Pakistan and around the world discuss how to design, finance, and manage co-working spaces in one of dozens of sessions, trainings. and workshops at the Digital Youth Summit. Over 80 domestic and international speakers provided their expertise and resources to help realize Khyber Pakhtunkwa's digital future, which is expected to help create 75,000 digital jobs.

Passionate entrepreneurs and technologists from Pakistan and across the globe converged in one place to share expertise, exchange knowledge, and to discover and support the next big idea among emerging entrepreneurs and students. Where did it happen? The energy and spirit exuded Silicon Valley, but it was located in none other than Peshawar, Pakistan, in a region that is affected by instability and violence.

Over four days, the Digital Youth Summit (DYS) had 4,000 attendees some as young as age 10, interacted with industry leaders, engaged in technology demonstrations, and benefitted from hands-on training. Everyone learnt a lot about digital entrepreneurship and was inspired by many cutting-edge innovations.

The Summit featured innovative local ventures pitching their growing companies to investors ranging from security systems with facial recognition, to a smart motorcycle helmet made by Helli that incorporates sensors to detect shocks and automatically notifies contacts. Three companies were funded under the Summit’s Startup Cup competition including Helli, Qayaam homesharing, and the winner, Find my Adventure, whose tagline is “Pakistan is waiting for you” and is the country's first one-stop travel solution with trips, tours and activities integrated onto one website. 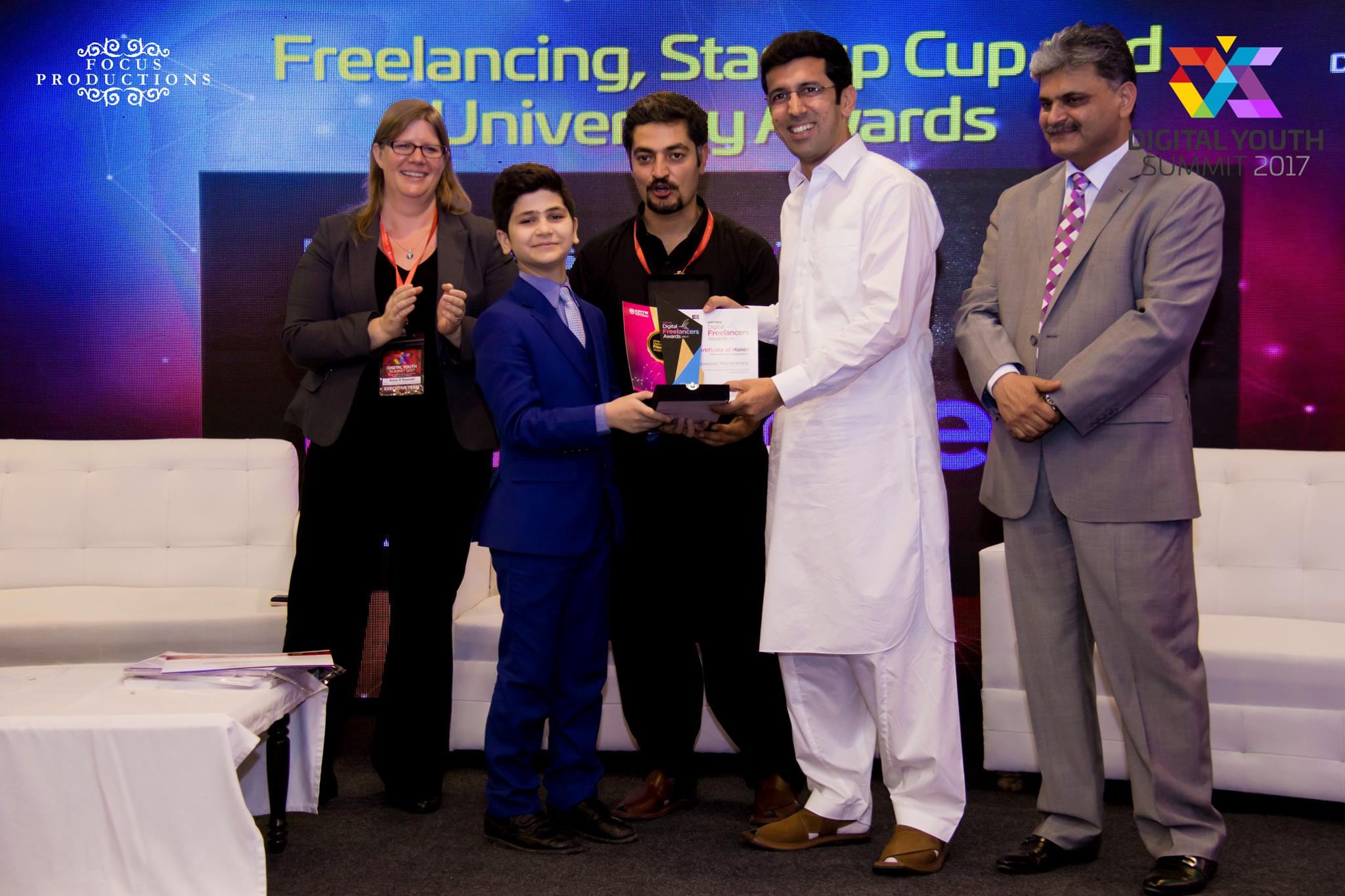 14-year old Sabawoon Nangrahary was the youngest winner of the Digital Freelancing Award through his talk show series in which he earns income and has generated more than 65,000 fans on his Facebook page.

Photo Credit: Focus Productions
" Our parents don't completely understand what we do but are supportive since we are happy and can make our own living. My parents were educated but could not easily find jobs; we can now create our own jobs. " 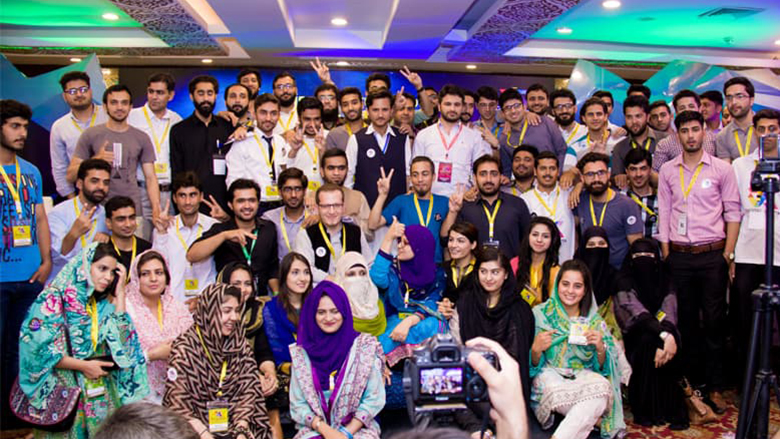 The Digital Youth Summit would not have been possible without the contributions of the hundreds of organizers, speakers, volunteers, and the thousands of attendees. The enthusiasim and energy of the speakers, organizers, and attendees was palpable throughout the event.

The knowledge sharing was accompanied by the launch of Pakistan’s first provincial Digital Strategy for Khyber Pakhtunkhwa (KP), the first of its kind in Pakistan that maps out and provides resources on improving access, training, and implementation of technology to create new opportunities and improve services. Through a series of programs, investments, as well as local and international partnerships, successful implementation of the strategy is expected to create 75,000 digital jobs in the province. As a start, the strategy will introduce early age programming, government innovation labs, and a KP Youth Employment program.

DYS originally grew out of an idea of bringing together the next generation of digital entrepreneurs in 2014 to educate and inspire youth in a region that is exceptionally young, with 70% of the people under age 30. Due to poor road links and sporadic power supplies along with a lack of jobs for so many youth; digital freelancing, entrepreneurship and business processing were identified as growing opportunities to nurture. The youth of the region has seized this opportunity with speed and enthusiasm, including 14-year old Sabawoon Nangrahary, who won the youngest freelancing award through his talk show series in which he earns income and has garnered more than 65,000 fans on his Facebook page.

Since 2014, DYS has increasingly brought in greater international expertise, local and international partners, as well as higher visibility and sophistication to keep pace with higher expectations. A number of ideas that participants shared three years ago at the inaugural DYS have now become successful ventures, including the partners that created and managed the Digital Youth Summit and KP Digital Strategy websites, mobile applications, and social media pages. The hashtag #DYS17 became the most talked about topic on social media in Pakistan.

Domestic and international companies were also excited by the potential of partnering with young techies including the telecom company Jazz and ridesharing company Careem, both announcing new investments to support local job creation.

Speakers and participants expressed great enthusiasm about digital opportunity and optimism about the future. Student Abbas Muhammad echoed the spirit of the Summit. "Our parents don't completely understand what we do but are supportive since we are happy and can make our own living. My parents were educated but could not easily find jobs; we can now create our own jobs."


The Digital Youth Summit was organized by the KP IT Board and the World Bank Group and was powered by Jazz, supported by USAID, and sponsored by the Tourism Corporation of Khyber Pakhtunkhwa, UNDP, Bank of Khyber, Gloria Jeans Coffee, March Designs, Pakistan Telecommunications Authority, the Multi-Donor Trust Fund for KP, FATA and Balochistan, Codematics, and Animation Republic. 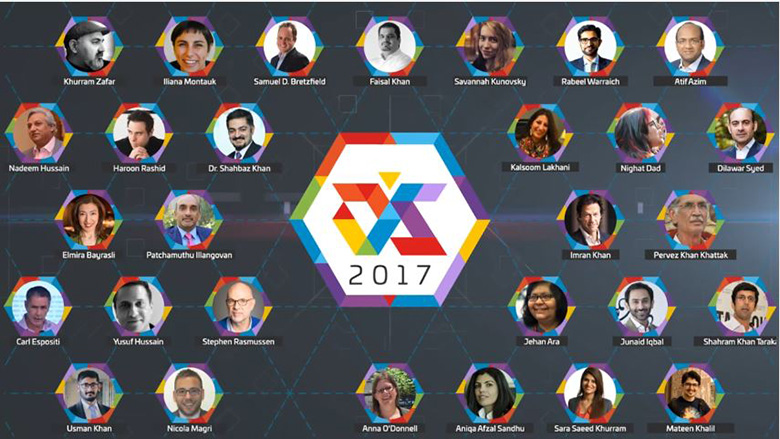 What is the Digital Youth Summit?