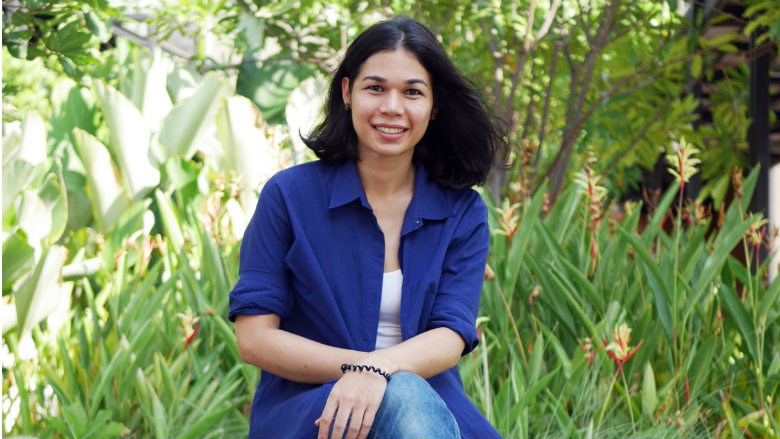 “I am from Ayutthaya, born to a Muslim family. During my childhood, I was happy to play with girls. When I got to secondary school, things became clearer for me. I wore boy’s clothes but I had a nagging feeling deep inside that it wasn’t who I am. So I would  pull my trousers up, grew out my bangs, powdered my face and took care of myself."

“I started to feel awkward when praying at the mosque. I wasn’t sure if this was the right path to take. I was also very uneasy in the company of large groups of men. On one occasion, the Imam said, “Being a tomboy or katoey (gay) is a sin. Parents should educate their children to stay on the right path.”  I felt that he was saying it out of duty and was not really directing it at anyone in particular. But having heard this made me uncomfortable and convinced me to stay away from the mosque. I began praying at home instead of going to the mosque. I attended religious classes after regular school hours and had to finish the small and big versions of the Al-Quran. After completing the big Al Quran, I requested to discontinue religious study. I gradually retreated from the Muslim society. Nevertheless, my faith remains unshaken. I still fast during Ramadan. I pray in my room as much as I can."

“Though we didn’t officially discuss this at home, my family knew about my identity all along. My father seemed alright about it but my mother would still try to control me. I moved to Bangkok to study at Thammasat University. Initially, I dressed like a man. By my second year, my heavy study load and campus activities made me stay late in school so I move to the dormitory. I started to dress like a woman on campus and changed into men’s clothes whenever I went home. One day, I asked my parents if we could talk. I told them that I wanted to dress like a woman and wanted them to think about the bigger picture, beyond religion and being Muslim, to living a fulfilling life loved by people around me. My parents cried. They said it was their fault for not raising their children properly. That hurts so much. My mother said to me at that time, “Lee, you cannot do this. We are Muslims.”  I told her, “Even if I cut my hair short and put on men’s clothes, whatever I am inside is still a religious offense!”

“This is a big issue that remains with me till today because my religion says that ‘you cannot be like this’ and it also tells you that ‘when children do evil, parents get punished twice as hard for that sin.’ I felt like I had to compensate for this, and that I had to be a good child and study hard so that my parents are proud and love me."

“My mother focused a lot about being Muslim and how I dress up. It wasn’t until my graduation that she told me ‘I had no idea how loved and popular you are’ after seeing all the gifts I received from other students in my club activities and from my seniors and juniors. It was as though my mother’s own words liberated her because from then on she talked less about religion. Occasionally, when there are religious events, she’d sometimes ask me to join but I would tell her honestly that I didn’t feel comfortable joining. After that, she stopped asking."

“These days, I have a stable job. It’s proof that no matter what gender identity I choose, my parents can still depend on me. In the past, my parents called me their son. But if anyone asks now, they say I am their daughter.”