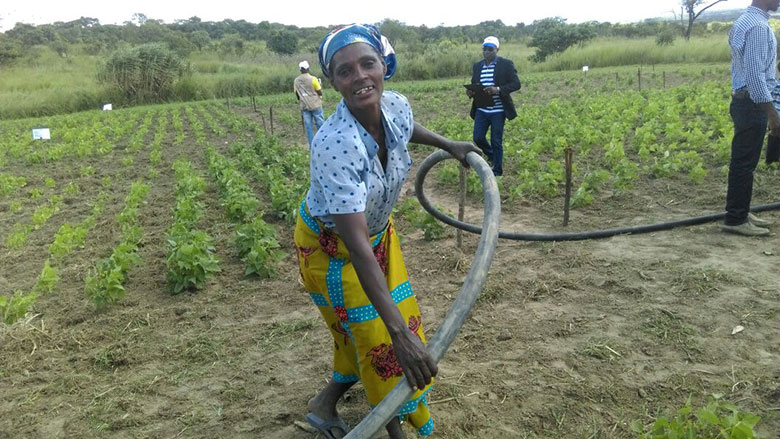 Lina Balanda, 3-year MOSAP beneficiary, member of the Muecalia Association and a Farmer Field School in Bailundo, Huambo, “I am a single mother but I now have my own house that I built with my own money that I earned from my produce.”

LUANDA, May 2, 2017 - Barnabe Chico Saguale is the president of a farmer’s field school in Bie, a province that lies at the very center of Angola. He says he learned a lot from his field school, which until March 2016, was sponsored by the Market Oriented Smallholder Agriculture Development Project (MOSAP) that worked in three Angolan provinces, Bie, Huambo, and Malanje.

A year after this World Bank-financed project closed, we visited some of the farmers who took part in it, like Saguale, and saw the impact it made. The project taught farmers to value their time and effort before taking their produce to market. Before the project, they had not taken into account the time they spent working on their fields, preparing the land, planting seeds, harvesting, weeding, and maintaining their crops with fertilizer, Saguale told us.

They had not placed value on the entire production process, but now they knew how to. This meant that, in terms of making money, they knew whether they were winning or losing before going out to sell their crops because they knew how much they had already cost to grow. That helped them sell their farm produce at a profit and sustain their production cycle.

In the past, farmers said they had gone to market and sold what they had at giveaway prices. Now they were able to stick to their pricing when clients tried to get things for a lower price.

Though men led the field schools, women benefited too

Although leadership positions in Angola’s farmers’ field schools were usually dominated by men, within the farmers’ associations, the project was generally well-balanced in terms of gender: an estimated 56% of farmer field school participants were women.

“The project was successful in targeting and supporting female participation,” said Aniceto Bila, the World Bank’s lead person on the project.

At individual level, lives have improved dramatically as a result of the project assistance.

“I am a single mother, but I now have my own house that I built with my own money that I earned from my produce,” said Lina Balanda, a member of a field school in Huambo province. A dynamic and energetic woman, she would like to be the first woman from the project to buy a motorbike and drive it to market herself. Although motorbikes are common in Angola, they are rarely driven by women, so Balanda can’t wait to show the world that women in rural Angola are also working their way out of poverty.

Smallholder farming is important even in oil-rich Angola

Angola is a resource-rich country, its economic growth affected only by the legacy of civil war and the exploitation of its natural resources. Agriculture contributes, on average, only 5.5% to GDP, but 44% percent of employed Angolans work in the sector,

About 80% of the country’s farmers are smallholders and they face many constraints, including knowing little about improved farming practices and new agricultural technology; having poor access to extension services and limited access to seeds and fertilizers; and having little market information.

About 725 farmers’ field schools were created by the project.

The project was designed to fit into Angola’s Poverty Reduction Strategy (PRSP), which highlighted rural development with a focus on food security and the revitalization of the rural economy. By the time it closed in March 2016, it had helped train over 50,000 smallholder farmers to boost the production of the major crops targeted by the project. As a result, the average yields of potatoes, maize, and beans had increased considerably.

To scale-up MOSAP’s achievements to include more regions of Angola and more beneficiaries, a new smallholder agriculture project was approved by the Board in July 2016 and launched in Bie Province in March. In addition to doing capacity building for smallholders, the Smallholder Agriculture Development and Commercialization Project (SADCP) aims to strengthen the Angolan Ministry of Agriculture’s capacity for statistics, policy analysis, market information, irrigation development, and agricultural extension.

It will also mainstream environmental considerations and climate-smart agriculture in the project design, through soil conservation, integrated natural resource management, and the more efficient use of water.