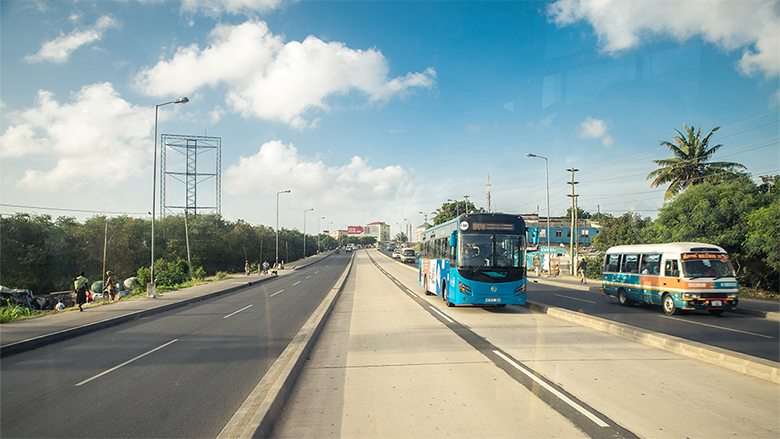 The first phase of the Bus Rapid Transit system reduced roundtrip travel time on the corridor by 90 minutes a day.

DAR ES SALAAM, March 27, 2017−A mother of two, Mwanaidi Mrisho has been a fishmonger for the past decade. Each day, she commutes from the Magogoni Fish Market, at the western-most end of Dar es Salaam, to Kimara-Mwisho, about 20 kilometers outside the city. The onerous daily commute has taken its toll on her well-being and her livelihood.

“It used to take me up to three hours to travel from Kimara to Magogoni and back every day due to traffic jams,” explains Mrisho. “I would aim to be on the road by 5:00 am at the latest in order to make it to the fish market before 8:00 am.”

In Tanzania’s business capital, Dar es Salaam, which is located along the Indian Ocean, fish traders from various city suburbs rush every morning to get to Magogoni, where auctions typically start at the crack of dawn.

“The earlier you get to the market, the more likely you are to get the best deals in terms of quality of fish and price,” Mrisho adds.

Until last year, commuters like Mrisho in Tanzania’s largest city relied on a public transport system dominated by about 7,500 daladalas – loosely regulated commuter minibuses operated by individual owners. These would jostle each other for passengers in the city’s epic traffic jams, where 10-minute trips easily took more than three hours during peak times.

Since May 2016, however, this has started to change with the first phase of the Bus Rapid Transit (BRT) system and subsequent phasing out of the daladalas on the BRT’s route, which has already significantly reduced travel time and costs for many commuters.

The World Bank Group financed the first phase of the BRT system under the Second Central Transport Corridor, which was completed in 2015 and covers more than 20 kilometers of truck routes. With a fleet of 140 modern high-capacity buses operated by the Usafiri Dar es Salaam Rapid Transit (UDA-RT) ferrying commuters along segregated busways, the journey that once took two to three hours has been reduced to between 30 and 50 minutes. The UDA-RT is providing interim services, while another private operator that is being competitively procured will supply an additional fleet of 165 buses.

This week, World Bank Group President Jim Yong Kim and Tanzanian President John Magufuli unveiled the foundation stone for the second phase of the BRT. It will entail the construction of the Ubungo Interchange, a set of overpasses at a landmark intersection leading into the city, which has been a bottleneck slowing transit on the BRT.

The interchange is being built under the Dar es Salaam Urban Transport Improvement Project (DUTP) which is supported by a $225 million concessional credit from the International Development Association (IDA) in addition to an IDA Scale-up Facility Credit of $200 million.

At the launch event, President Kim congratulated the Tanzanian government on the remarkable investment in the BRT system and the decision to have it operated under a public private partnership.

“Government leadership and public spending will always be critical, but we’ve also learned that if the use of public resources is strategically focused, we can dramatically increase finance for development by crowding in private capital,” Kim said in his speech. “Countries can put in place reforms, build the pool of bankable projects, and deliver sustainable and affordable infrastructure services.”

Kim said leaders at the G20 meeting in Germany, from which he had just traveled, had appreciated the urgent need to rethink development finance. “Aspirations and the global goals are so expansive, and to meet them in a country like Tanzania, we need to maximize the pool of resources for public development,” Kim said.

Dar es Salaam has a population of 4.4 million which has been growing rapidly at a rate of 6.5% per year and is expected to become a mega city before 2030. The city has major congestion and mobility problems from a combination of rapid growth, an underdeveloped road network, an increase in motorization and port-through traffic, and the lack of efficient public transport.

“The journey from the Port of Dar es Salaam takes a truck up to seven hours to Kibaha, a distance of just 28 kilometers,” laments Rahim Dossa, a member of the Tanzania Truck Owners Association. “This means we have to use more fuel and this affects our bottom line.”

The Dar es Salaam BRT is planned as an extensive system of 137 kilometers of corridors to be built in six sequential phases. The African Development Bank and the Africa Growing Together Fund, jointly with the Government of Tanzania, are financing the ongoing construction of the $159 million second phase of the BRT system totaling 20.3 kilometers.

“The BRT is another great example of how strategic government investments can lead to private sector investments and great outcomes for the people,” Kim said. “Since the BRT opened last year, it has reduced the roundtrip travel time on this corridor by 90 minutes a day, saving commuters 16 days of sitting in traffic.”

For many small-scale fish traders like Mrisho, who sells her stock on the roadside in Kimara, the BRT could transform her life for the better, as time saved in transport means more money in her pocket, and greater peace of mind. 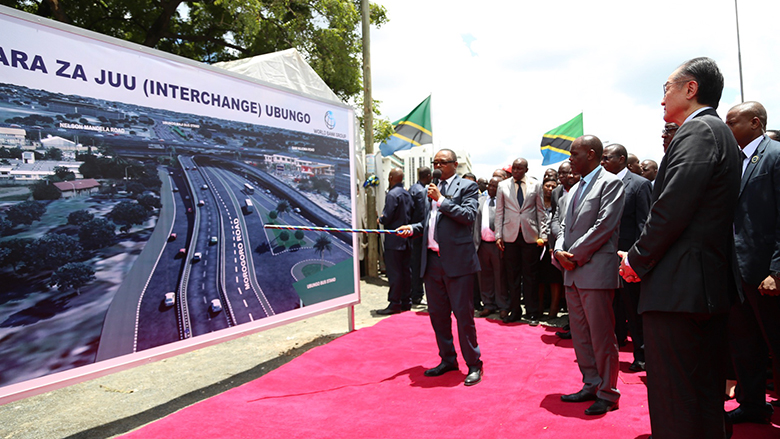