Finding Harmony Between Refugees and their Host Communities in Chad

N'DJAMENA, March 17, 2017−Some 8,000 people are desperately trying to rebuild their lives in the Dar es Salaam refugee camp located along the banks of Lake Chad in the town of Baga Sola. Dispersed over several kilometers in endless canvas tents bearing the colors of the United Nations, they are struggling to recover from the trauma inflicted by Boko Haram.

In this camp, as is the case in the other camps that have been springing up all across Chad in recent years, one cannot be unmoved by the plight of these men, women, and children. They lost everything when they fled and now need everything. “We all left behind our jobs, and we no longer fish, farm, or engage in our usual business. Being unemployed is very stressful,” laments Ousmane Mahamat, the head of the camp.

Further away in the far south of the country, the Goré prefecture is also buckling under the weight of the refugees. “Here, all the returnees and refugees who fled the war in the Central African Republic account for half of the local population, with as much as 33% being refugees, excluding the returnees,” explains Augustin Gongtar, Goré’s prefect. The Dar Sila region, which straddles the border with Sudan, has for the past 13 years been sheltering refugees from Darfur and more recently from the Central African Republic (CAR). Here, too, the region’s governor, General Moussa Haroun Tirgo, paints a bleak picture. “Our region is adversely affected by the crises in Darfur and the CAR. We are hosting roughly 54,000 refugees in terrible living conditions, with no access to water or basic social services. We are also cut off for five months of the year because of the floods.”

It is against this backdrop that a joint mission comprising the World Bank, the United Nations High Commissioner for Refugees (UNHCR), and the United Nations (UN) traveled to Chad a few weeks ago. “This site visit aimed to continue our strategic dialogue on forcibly displaced persons in Chad with the government and main partners. It was particularly well timed as the discussions were held during the International Development Association (IDA 18) replenishment period, and there is significant funding for aid to refugees and their host communities,” explains Adama Coulibaly, World Bank Country Manager for Chad. The mission also included Xavier Devictor, Program Manager for the Global Program on Forced Displacement, Jose Antonio Canhandula, UNHCR representative in Chad, and Stephen Tull, UN Humanitarian Coordinator and Resident Coordinator in Chad, and the United Nations Development Programme (UNDP) Resident Representative.

Xavier Devictor spoke directly to refugees, returnees, and host communities comprising women, men, and children who are now forced to live together under trying conditions, and was “impressed by the words of welcome and inclusion” that, despite the circumstances, were expressed by the individuals with whom he spoke. Wherever the mission visited, host communities and administrative authorities showed extraordinary solidarity and hospitality toward the forcibly displaced persons they were hosting in their region and with whom they have shared everything despite the extreme poverty that they sometimes endure.

This is reassuring to the mission that is exploring new areas of support for Chad. “We are resolved to support Chad’s efforts, not by duplicating UNHCR work already carried out on the ground, but by going beyond merely providing aid to the refugees, adopting a more comprehensive approach that encompasses a development strategy for the region’s entire population,” notes Xavier Devictor.

The initial findings of the mission clearly indicated that the host communities “and the natural environment in particular are bearing the brunt of the demographic pressure being exerted by forcibly displaced persons. They receive little assistance in return and, paradoxically, sometimes have less access to basic infrastructure and services than the refugees and the displaced.”

Addressing the mission, Sougnabe Dimougna, the prefect of Baga Sola, stated: “your assistance will be invaluable in helping us promote a more active integration of forcibly displaced persons and reduce the pressure that this situation is exerting on our community. We share everything with them – hospitals, schools, food, and fields without having made proper preparations. The host community therefore also deserves the attention of our development partners.”

The UNHCR has already initiated discussions with refugees with the aim of preparing them for a new approach to the assistance they will be provided. UNHCR Representative Antonio Canhandula notes that “we must ensure that refugees adopt a more active attitude. This is critical to their integration into the local community and their social inclusion, and will require increased involvement in the activities of their host community,” adding that “in this way, we will have tailored our efforts to the situation, because the fact is that we are dealing with a situation where 20% of the problems relate to humanitarian issues and 70% to development issues.”

In addition, the Emergency Food and Livestock Crisis Response Project , which is being financed by the World Bank and implemented by the World Food Program (WFP) and the Food and Agriculture Organization (FAO), has already helped some 70,000 refugees become more independent and rebuild their lives through income-generating agricultural activities. The goal now is to ensure the sustainability of this type of initiative. 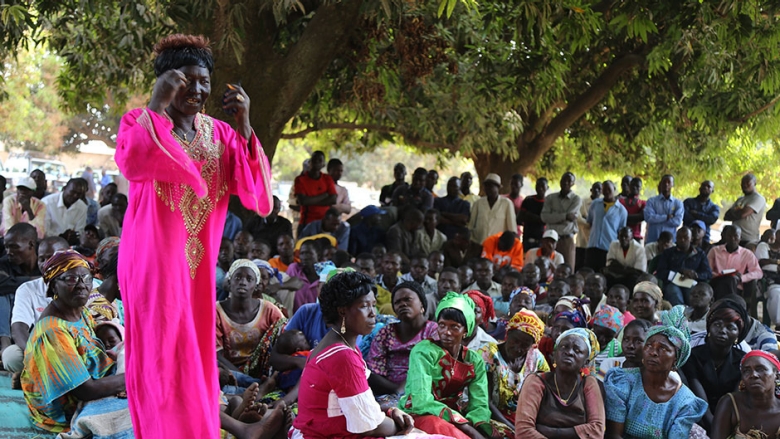 Harmonizing Aid to Refugees and their Host Communities