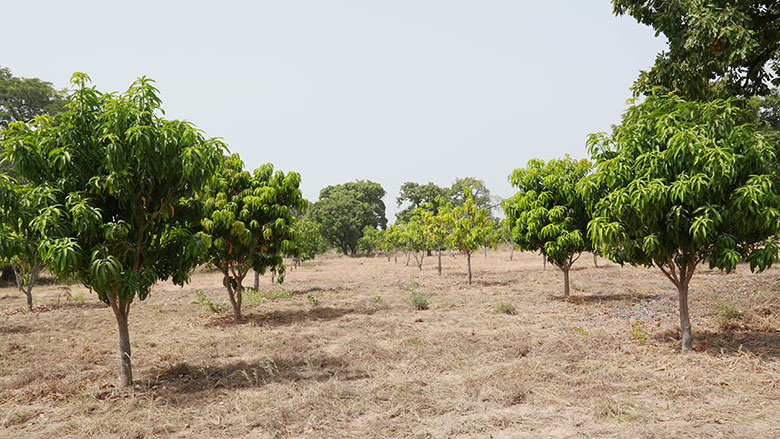 Under the Ghana Social Opportunities Project, a seven-hectare mango plantation was planted.at Targanga in the Garu-Tempane district of the Upper East Region.

BOLGATANGA, March 13, 2017 – Throughout Ghana’s dry season, community members in the country’s disadvantaged districts can be seen actively participating in the rehabilitation of their community’s infrastructure. Sometimes they are clearing rural roads, other times they are maintaining earth dams and dugouts. As participants of the Labor-Intensive Public Works (LIPW) program, they are not only gaining experience and restoring local shared infrastructure, but they are also earning an income that is allowing them to support their families.

Financed by the Ghana Social Opportunities Project (GSOP), the LIPW program has rehabilitated 199 feeder roads (or 792 kilometers) and 192 small earth dams and dugouts, and reforested 2,550 hectares of degraded public and community land through tree-planting and other biodiversity restoration activities.

In the Garu-Tempane district of the Upper East Region, Atiswin Apuazia is one of many women, and some male counterparts, who worked to rehabilitate an earth dam that, when completed, helped the Zesiri community increase their livestock production thanks to the year round access to water.

“The program allowed us to earn money that we could use to buy school uniforms and other necessities for our children to go to school. We plan to buy more animals to rear and increase our income. If we can save a part of what we earn here, we will be able to sustain ourselves after the project,” says Apuazia.

The Ghana Social Opportunities Project, implemented by the Ministries of Gender, Children and Social Protection and Ministry of Local Government and Rural Development, has so far provided short-term employment to 165,860 people living in extreme poverty (61% of whom are women) and as a result have paid $17,900, 000 in wage earnings through electronic means to beneficiaries.

“By fixing the wage rate above the national minimum wage but below agricultural wage rate, it is only the extreme poor who are attracted to do this job. We know that in early 2017, the minimum wage will surpass 8 Ghana cedis ($1.8) and so we will be revising our wage rate to something like 9 Ghana cedis ($2.1) a day per beneficiary,” remarked Robert E. Austin, National Coordinator for the Ghana Social Opportunity Project.

A seven-hectare mango plantation at Targanga in the Garu-Tempane district of the Upper East Region, another LIPW project under GSOP, which is a climate change mitigation activity aimed at creating employment opportunity for the people so they can earn an income. A total of 596 individuals have been supported under this climate change mitigation activity and of the 262,769 Ghana cedis spent on the activity, about 191,821 Ghana cedis was paid directly as wages to beneficiaries.

“We have benefited a lot from this project. Prior to its completion, community members were earning monthly wages from their reforestation work, and since the project was handed over to them, they have harvested the mangoes twice,” says Chief Akudug Alem, who is also a beneficiary from the Targanga community.

The Ghana Social Opportunities Project is a seven-year, $138.6 million World Bank-funded project with the goal of improving the targeting of social protection programs and providing income support to poor households through the Livelihood Empowerment Against Poverty (LEAP) grants and LIPW infrastructure rehabilitation in targeted districts.  The LEAP program is designed to help alleviate short-term poverty by providing cash transfers and health insurance to extremely poor households across the country. The project has over the years assisted the Government of Ghana in expanding LEAP to 213,028 households in all 216 districts using electronic data capturing tools.

“Not only is the LEAP program helping families out of extreme poverty, but it also requires program participants to be registered in the National Health Insurance Scheme, which will help us perform better targeting down the road,” explains Dzigbordi Agbekpornu, National Manager for the Livelihood Empowerment Against Poverty program.

The Ministry of Local Government and Rural Development has assisted the Ministry of Employment and Labor Relations to also formulate a national labor-intensive public works policy under the GSOP which is aimed at institutionalizing the LIPW as a tool for employment creation in Ghana. The policy was launched on August 16, 2016 and implementation plan is expected to begin in 2017.

As a means of ensuring that the beneficiaries of the GSOP program exit poverty on a permanent and sustainable basis, the project is piloting a complementary livelihood support intervention with funding from the Japan Social Development Fund (JSDF) in eight districts of the Upper East Region, targeting some 6,200 beneficiaries with $2,752,500 million. In order to complete the current phase of the GSOP there are plans to extend the project by six months and to follow up with another targeted social protection project in 2018.