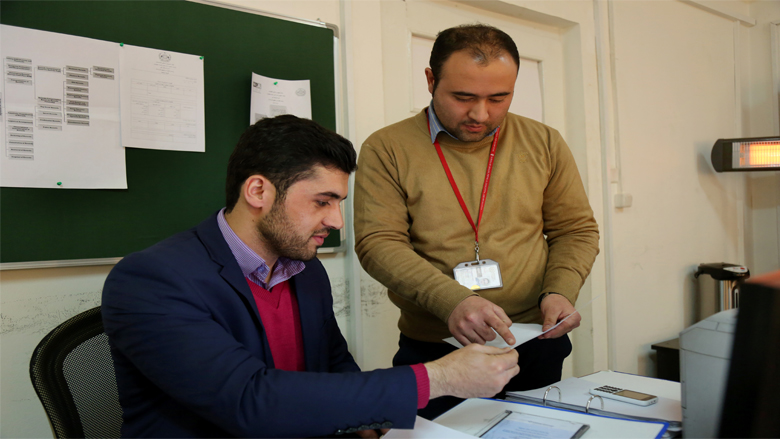 Employees are digitizing procurement contracts and upload them on the website of the National Procurement Authority (NPA) to ensure transparency in the procurement system in Afghanistan.

KABUL CITY – The room is a little dark and every few seconds Mozhgan pulls out contracts to scan and save them on her computer’s hard drive. She saves the scanned documents using a special software and uploads them on the website of the National Procurement Authority (NPA). The scanner’s green light bounces off the floor while her colleague files other documents in a filing cabinet.

Mozhgan and her colleagues are digitizing procurement contracts to ensure transparency in the procurement system in Afghanistan. According to Transparency International, Afghanistan was the second most corrupt country in the world in 2015. However, things seem to be changing. “NPA is a very different office, we work enthusiastically to bring transparency and combat corruption,” states Mozhgan, 27, a technical officer in the archives section. “I never wanted to work with the government, but now when I see what NPA can do, I am proud to be working for the government.”

NPA developed the mechanism to digitize procurement contracts to make them accessible to the public. “We try to make it simple to access information on procurement contracts. All information is now just one click away,” says Patyal Ghorzang, Contracts Implementation Monitoring Director in NPA. The Authority has established a system that provides the opportunity to not only government officials but also to millions of Afghans to monitor the progress of contracts through “one click” access to contract plans and progress data. The online Contracts Progress Monitoring System captures contract implementation data from the procurement entities in a systematic way and publishes them for public and civil society monitoring.

Set up in accordance with the Procurement Law of Afghanistan, NPA is one of the most far-reaching anti-corruption measures undertaken by the Government of Afghanistan. It aims to foster institutional reform in public procurement in order to provide better services through an effective, efficient, and transparent procurement system with internationally acceptable standards and best practices.

The Authority is tasked with recommending policies, monitoring public procurement, coordinating programs, and monitoring contract implementation. It monitors projects that add as much as 19 percent to the gross domestic product and take up about half of the national budget. NPA reforms are likely to boost economic growth, introduce more effective control of financial expenditure, and, most importantly, root out corruption.

The NPA receives funding support from the Public Financial Management Reform (PFMR), a project that aims to further strengthen the efficiency and effectiveness of Afghanistan’s procurement, treasury, and audit systems. Implemented by the Ministry of Finance, the PFMR project is supported by the Afghanistan Reconstruction Trust Fund (ARTF). The project, currently in its second phase, started in August 2011 and is scheduled to operate through 2017. 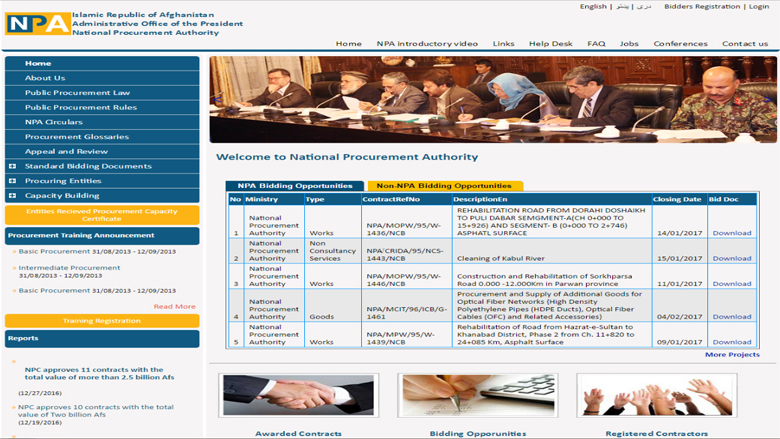 Photo Credit: Rumi Consultancy/ World Bank
" No one can influence the procurement process and the establishment of NPA has reduced corruption in the contracts process to zero. " 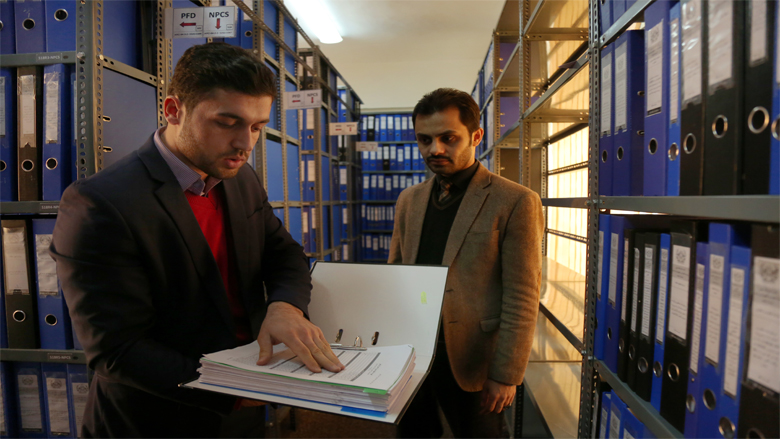 Cited as a model of efficiency for other government agencies, the  National Procurement Authority (NPA) has taken several steps to reform public procurement to ensure efficiency and transparency in the process.

The reforms have brought about a significant positive impact in government procurement. The Independent Joint Anti-Corruption Monitoring and Evaluation Committee, which evaluates government offices every year rated the NPA the most efficient and noted it as a great example in the country. Additionally, Transparency International reported for the first time success in anti-corruption efforts in Afghanistan and quoted NPA as a systemic reform.

This is echoed by other anti-corruption watchdogs. “We can say that NPA is good example of the anti-corruption effort made by the government in the past two years,” notes Sayed Ikram Afzali, Executive Director of Integrity Watch Afghanistan. “Now, no one can influence the procurement process and the establishment of NPA has reduced corruption in the contracts process to zero.”

With NPA reforms, every eligible bidder has an equal opportunity to participate in the procurement process. Companies are also penalized if found fraudulent. Since NPA inception, 83 companies have been blacklisted on account of their fraudulent practices. This has paved the way for more competition and reduced costs. “In combating corruption, we transformed the procurement system. The system itself helps reduce corruption,” says Patyal Ghorzang.

Prior to the inauguration of NPA, the procurement system was mired in corruption. There were parallel procurement-related offices, and the procurement law was confusing and ambiguous on a large number of points. The officers were unprofessional and this added to the chaos and led to significant project delays. “Many powerful people influenced the procurement system,” says Javed Noorani, a civil society activist in Kabul. The NPA has reduced this “influence”, he says.

However, challenges in monitoring project implementation persist. Many projects are very complex and require expertise to monitor and evaluate progress. “For now, the NPA does not have the capability to monitor many contracts as it takes time to build such capacity,” Javed Noorani says.

In response to the capacity challenges, the Authority plans to build and improve capacity of employees at various levels of the procurement process by setting up a training institute. The institute will address the shortage of professionals by training and encouraging driven young people to join procurement departments.

Although the NPA has made significant inroads in combating corruption, Afghanistan remains one of the most corrupt countries in the world. A new generation, however, is determined to fight corruption and ensure a brighter future for themselves and their country. “We started from zero, but our values of integrity and professionalism in work have helped us to achieve high goals and we are going forward,” says Mozhgan.