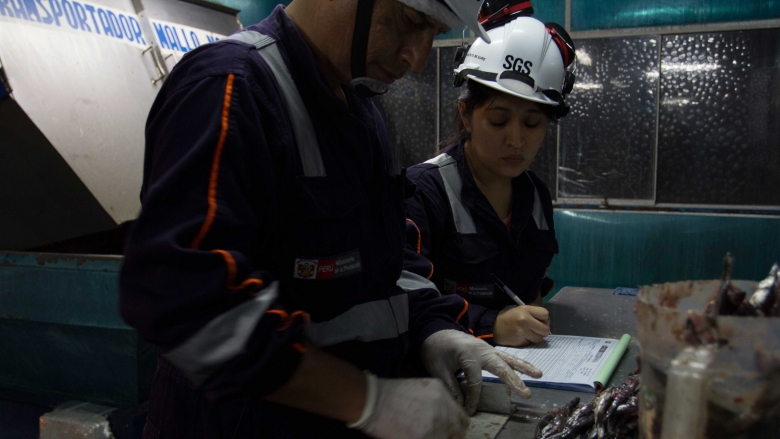 The government of Peru overhauled the management of the industrial anchoveta fishery, with the help of the World Bank.

Peru is home to one of the world’s largest single stock fishery – the anchoveta -- a species related to anchovy, which supplies fish oil rich in omega-3, and fishmeal for livestock and aquaculture around the world. Only a few years ago, this little fish was threatened by rampant overfishing and by recurring changes in ocean currents from climatic events like El Nino.

“Anything went,” concurred Antonio Juarez Amaya, a fishing captain with 42 years of experience. “We took the whole school, no matter the fish size.”

Until 2009, the Peruvian anchoveta fishery was managed as an open access, common property resource, with an overall catch quota imposed in the North-Center region. This led companies to overinvest in vessels and try to catch as much fish as they could during the open season, which in turn put significant pressure on fish stocks.

The government of Peru overhauled the management of the industrial anchoveta fishery, with the help of the World Bank. The first priority was to restore the health of the stocks by reducing fishing. In the case of the anchoveta, this meant adopting a rights-based approach based on quotas set by a scientific body, assigned to individual companies.

As a result of the reform, a quarter of the fleet was decommissioned. Fishing companies that remained in the anchoveta sector but reduced their fleet offered rotating assignments to their workers and compensated those who chose to exit the sector. As required by law, FONCOPES, a compensation fund financed by the private sector, provided over 2,000 ex-fishermen with training programs and advisory support to start small businesses.

Jose Luis Cardenas Vilchez, an ex-fisherman turned successful chef in Nuevo Chimbote, a coastal city north of Lima, is one of over 1,000 “success stories” documented by FONCOPES. “I was lucky, I received very good training [in gastronomy.]. I saw the transition as an opportunity rather than focusing only on the severance package,” he said.

Others found it more challenging. Ana Maria Jaico, a coordinator for FONCOPES who used to work in Chimbote, concedes that it was not always easy to convert fishermen, most of them 40-to-60 years old, to other professions. “Some chose to drop out of training programs,” she said. The overall sentiment, though, is that the gains secured by the reform outweigh the pains.

The health of the anchoveta stock, the quality of fishmeal, working conditions on vessels, and the profitability of the industry have all improved since 2009, although catches are still at the mercy of shifting ocean currents and other shocks.

Because the anchoveta is a resource that lives in an ecosystem of high climatic variability and is affected by changes in sea temperature, the size of the population and how much can be sustainably caught fluctuates widely from year to year.  The stock therefore requires constant monitoring. Growing cooperation between private fisheries and IMARPE, Peru’s maritime research institute, is helping gather real-time information on the state of the stock and climatic conditions.

“Nowadays, there are catch limits by ship, [and] fishing seasons. We preserve the species by size and maturity,” said Miriam Huanca Aguilar, head of quality control at the Diamante fishing plant in Malabrigo, Peru. “We are complying with the controls not just because it’s mandated by the law. We want to be responsible to make sure we can continue fishing in the future.”

While controls and quotas have helped the anchoveta rebound, other fisheries are less well regulated. Of the most important commercial species, 35 percent were not subject to any management regulations, while another 35 percent were subject only to minimum catch size regulations, according to a 2013 analysis.

In Pucusana, a small fishing harbor south of Lima clogged with vessels waiting to unload their catch, the pressure is evident on artisanal fishers such as David Garcia. Garcia was staying on shore the day he was interviewed because the price of jumbo squid was too low to cover his costs.  “The price has gone down because of oversupply,” he said. In his view, fishing limits could go a long way toward improving the sector: “by bringing in less fish here, we would take better care of the species and negotiate better prices.”

According to Hector Soldi, Peru’s Vice Minister of Fisheries and Aquaculture, putting artisanal fishing on a more sustainable footing is a government priority, as is the development of aquaculture.

“There is a great potential for innovation,” said Soldi, who welcomes the next phase of World Bank support in both areas, a $40 million National Program for Fishery and Aquafarming Innovation. Artisanal fishing employs an estimated 45,000 to 65,000 people. Aquaculture, still nascent in Peru, could provide an alternative activity for some of these fishers and help reduce the pressure on wild species.