Haova, a Nutrition Agent in Southern Madagascar and Mother to 619 Children 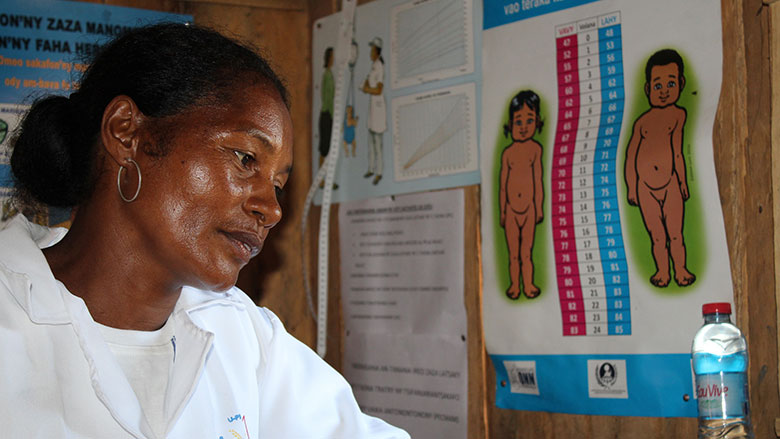 © Diana Styvanley/World Bank
In celebration of International Women’s Day, we are publishing a series of portraits of courageous and resilient women. Haova Rasoanandriana follows the nutritional health of children in the remote zones of southern Madagascar which have been devastated by drought, malnutrition, and acute poverty. Her passion and dedication to the population is truly remarkable.

ANTANANARIVO, March 8, 2017−She knows all the children and mothers in the rural commune of Behara, in the southern district of Amboasary. She has taken care of most of them and continues to do so. Haova Rasoanandriana has been a community nutrition agent for 14 years. Today, she monitors 619 children under the age of five in four villages of the commune. She weighs them, monitors their weight gain, accompanies them to the health center, and teaches mothers how to diversify their children’s diet to help them grow strong.

“I am 42 years old and have three children who are now adults. I want to help the mothers in my village take care of their children. They listen to me because I too am a mother. For me, being a nutrition agent is an occupation, a vocation, but also a way to take care of the community that welcomed me when I was still a teenager and married to one of their members,” says Rasoanandriana. 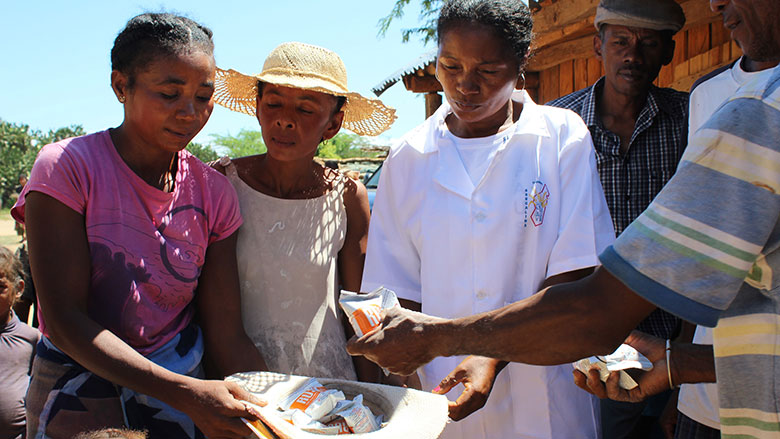 The number of children that she monitors has doubled in one year. The Ankiririke nutrition site is one of the 338 sites supported by the social safety nets project financed by the World Bank for the past three years to help communities cope with the severe drought in the south of the country.

“In 2016, the site received and monitored 278 children. Today, we have 619 children under five who come to the site on a regular basis. At first, I used to dedicate two half-days each week to take care of them, but these days I am here every day. And If I am not at the center, you will find me at the homes of the mothers who need me, visiting the children or instructing the new mothers,” she explains.

Severe drought in the south of Madagascar that has persisted since 2013 has led to drastically reduced harvests and driven over a million people into a situation of food insecurity. Some 35,000 children under five are moderately malnourished while another 12,000 suffer from severe acute malnutrition. Every month, Rasoanandriana and her team spot cases of malnourished children at the Ankiririke site and must transfer them to the closest basic health center (BHC), located 7 kilometers away in the city, in South Amboasary.

“I accompany the mother and the child, who is already tired, and we go on foot under a blazing sun to the South Amboasary BHC. We are hungry but we are mostly scared for the child. It is one of the hardest aspects of my job as a nutrition agent.”

Kasy Sambetoke, 3 years of age, is one of the children transferred to the BHC in November 2016 due to severe acute malnutrition. Today, she is recovering steadily but continues to take a nutritional supplement. Rasoanandriana goes to see her regularly at home to check on her condition. Her parents cultivate corn and cassava but as the harvests have been disastrous, the household has begun to eat red cactus, which has low nutritional value and can be detrimental to human health.

“I know all 619 children by name. Each child becomes my own child. I suffer with them and am very happy to be in a position to at least give a little hope thanks to the existence of this site, to assure them that they are not alone. My greatest reward is to see a child get well and start to laugh and play again,” she confides.

Rasoanandriana receives regular training in taking care of malnourished children. She mobilized the entire community to build the Ankiririke nutrition site, which has become a safe haven where mothers can be listened to and discuss issues. It has also become one of the only sources of hope.