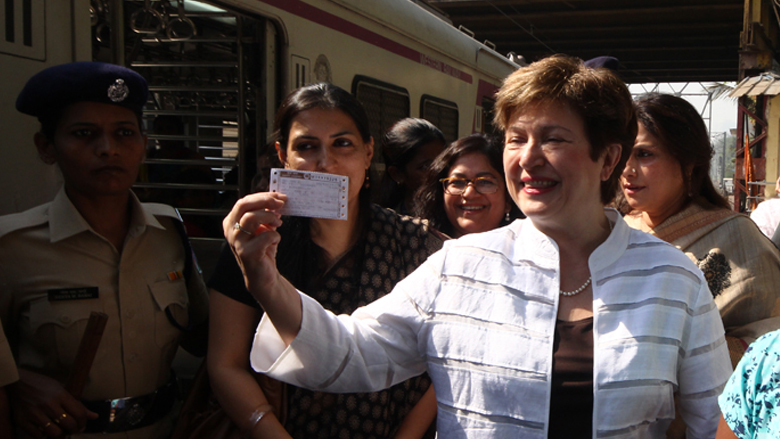 Arriving in Mumbai, India’s largest metropolis, Georgieva saw first-hand how an India that is urbanizing at a pace and scale which has few parallels in history is striving to make its cities a better place for all its citizens.

Travelling in the second class ladies compartment of a suburban train from Churchgate to Dadar station, Georgieva got a sense of the volume of passengers who use the trains every day, and the challenges the Railways face in making the system safer, faster and more efficient.

Mumbai is one of the world’s most densely populated mega cities and its suburban trains carry some 8 million passengers a day, almost equal to the population of Switzerland.  From 2002 onwards, a series of two World Bank supported projects - MUTP and MUTP 2A - have helped introduce new trains with higher speeds, better suspension systems, improved interiors, and a better ventilation system. The new trains have reduced energy consumption by 30 percent.

Aboard the ‘local’ – as the suburban trains are commonly called in Mumbai - Georgieva met women commuters who appreciated these improvements but wanted more to be done to make the trains safer.

“To meet the aspirations of Mumbaikars, some of whom I met today, the city will have to make massive investments in transport infrastructure. These investments will enable commuters to access more comfortable, safer and efficient services," Georgieva said. “The Bank is committed to support the government's efforts in this area – through investments that strengthen the government's capacity to leverage additional funds, including those from the private sector.”

A walk through Dharavi

Alighting at Dadar station, Georgieva walked through the narrow alleys of Dharavi, said to be one of Asia’s largest slums and the world’s third largest informal settlement.

Dharavi, made famous by the film Slum Dog Millionaire, teems with almost a million people who have flocked to the city from all corners of the country, and now live and work in a tightly packed melting pot spread across just two square kilometers in the heart of the city. The migrants’ drive and hard work has created a beehive of micro enterprises that pull in an estimated annual turnover of over US$1 billion.

In Dharavi’s dense warren of homes and workshops, where slippers are lined up neatly outside doorways, Georgieva saw first-hand the challenges of urban service delivery in a city where one-third of the residents live in slums. 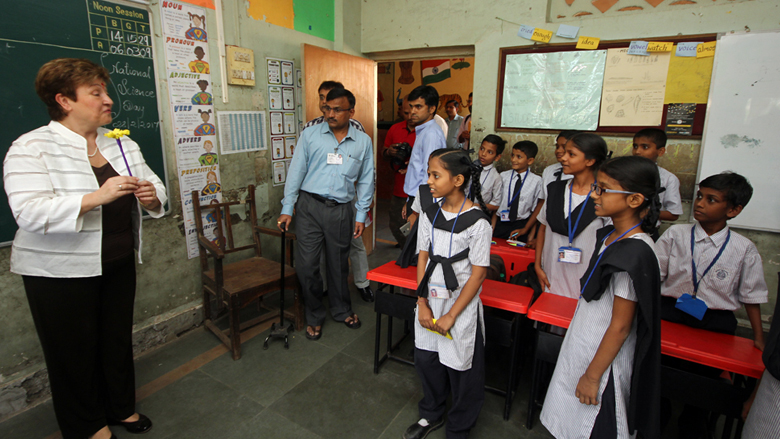 Photo Credit: World Bank
" I am very humbled that we from the World Bank can be partners with Mumbai as the city gets more prosperous. The future for you is bright and our commitment to be part of it has got stronger today. " 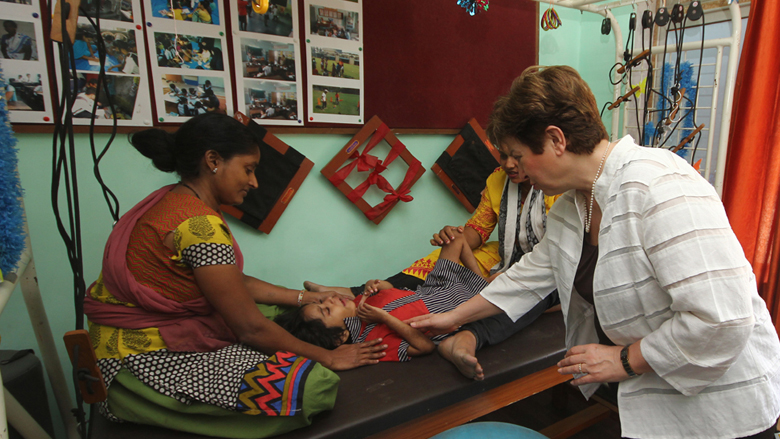 She visited a government-run school where more than 5,000 children – almost half of whom are girls - are taught in five Indian languages to meet the needs of diverse communities. The school, still called the Dharavi Transit Camp School after its origin as a school for migrant children, is part of the Sarva Siksha Abhiyan – India’s Education for All program - supported by the World Bank.

“Here, in the middle of this congested area, it is most impressive to see that everybody wants the school to be the best place. Why? Because the parents take pride in what their kids are going to achieve in life, and the children are motivated to study,” Georgieva said.

Reaching the most vulnerable

The school has a separate classroom where children with special needs are given individual attention and mainstreamed into regular classes.

Among the school’s 76 children with special needs is eight year old Jigar who used to walk on all fours because of a locomotor disorder. Jigar, whose family specially moved to Mumbai from their village home near Bhuj, Gujarat to seek help for their young son, can now walk on his feet and eat by himself. “The teachers at the school have made all the difference,” says his visibly relieved mother, Mayya.

Umesh Khillari, the special education teacher, who teaches the children with various disabilities, including those with cerebral palsy, autism, Down’s syndrome, visual, hearing and speech impairment etc. says he used to see a lot of aggression among the children “but they are better now”. Khillari, who hails from Maharastra’s Latur district, trained in special education after being moved by the plight of children with similar needs in his home village.

Meeting with the children, parents and teachers, Georgieva said, “I am very happy to see how even in a difficult informal settlement, the government has moved towards inclusion by delivering services to the most vulnerable.”

“I am very humbled that we from the World Bank can be partners with Mumbai as the city gets more prosperous.  The future for you is bright and our commitment to be part of it has got stronger today.”