Wildlife Poaching Declines as a Result of Income-Generating Activities 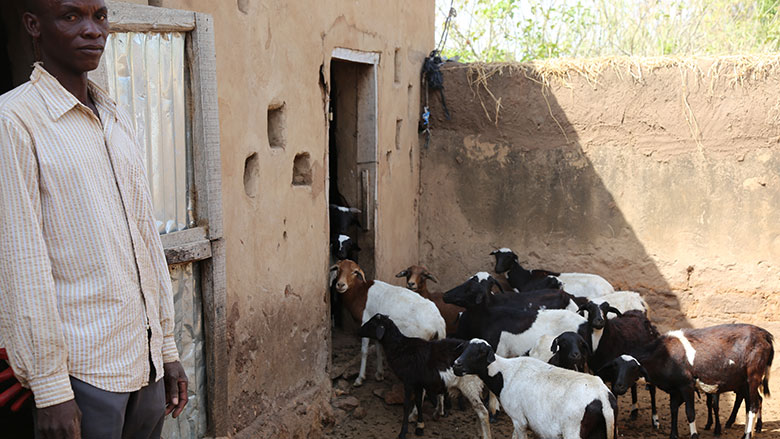 TANGUIETA, February 23, 2017—“Poaching has no future if Antoine Loana’s entrepreneurial spirit spreads to all the villages adjacent to the biosphere reserves,” remarked a smiling World Bank expert at the end of a project site visit. We are in Batia, the last village before the entrance to the Pendjari National Park in Benin. In the Coallegou district, Antoine Loana, who is in his fifties, has just shown off his new flock of sheep to the World Bank team, and it is unmistakably a source of pride for his community.

Two years ago, a CFAF 1.2 million grant from the Support to Protected Areas Management Project (PAGAP) allowed Loana to develop and expand his livestock activities, which he had been carrying out informally. He was able to build a sheep pen using durable materials, adopt new grazing techniques, and receive training in raising and caring for the animals, all of which brought about a real transformation in his life and the lives of his family and community. Over the past two years, his flock increased from 17 to 80 sheep, boosting his sales and income.

" Income-generating activities have undoubtedly reduced pressures on the park. Today, whenever you are in contact with our wildlife, you get the sense that a certain serenity has returned "

General Director of the National Center for Wildlife Management 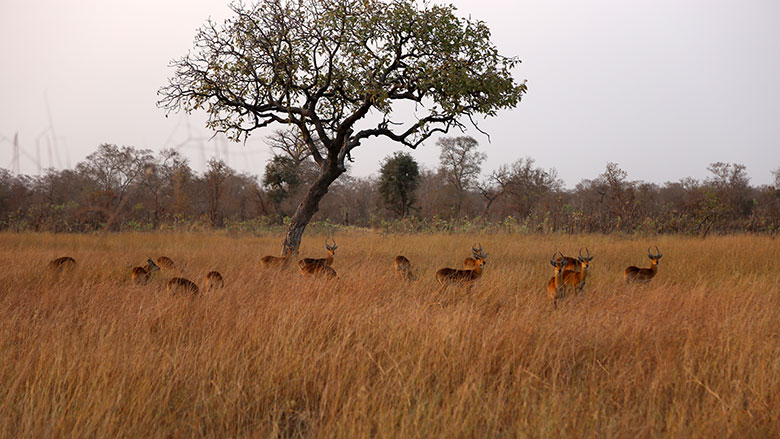 Loana is no longer tempted to poach in the Pendjari National Park, as he did before, to supplement his monthly income. Thanks to his stable income, he can also take better care of his children for whom he built a small house 60 kilometers from Tanguiéta, where they are pursuing their secondary education. “My success encourages many people to get involved in this activity. I now take care of my own sheep and those of other farmers in the village. I train them and I have become a kind of veterinarian,” he explained.

The funding Loana received is part of the income-generating activities (IGA) initiative introduced by the PAGAP in 2011, for the benefit of communities in the vicinity of national parks. The project seeks to combat poaching and reduce the pressure exerted by human activity on the biosphere. From an overall amount of CFAF 4.8 billion ($8.9 million) the project has already disbursed more than CFAF 247 million to finance 66 micro-projects for communities near the Pendjari and W Parks.

The project team intends to continue these efforts and finance a second series of initiatives. They have received more than 1,000 micro-project proposals and examined the feasibility of some 510 proposals selected for the Pendjari Park and 659 others for the W Park. In the end, 39 and 49 micro-projects were selected and approved, respectively. “The idea was to create alternative sources of income for adjacent communities so that they could eventually reduce the pressure they exert on park resources. Antoine Loana’s experience is quite edifying and has demonstrated to the other villagers the benefit of promoting economic activities instead of depending on the reserve,” said Eliassou Hamidou Séko, PAGAP’s coordinator.

The entrepreneurial spirit of this shepherd in Coallegou has also attracted the attention of Katrina Sharkey, World Bank Country Manager for Benin. “I was impressed by Antoine’s initiative, his appreciation of the local environment, and the structures he improved in order to house his animals. He was able to send his children to school in Tanguiéta and provide them with decent housing to guarantee them a better future,” she stated, noting that the residents adjacent to the park have now taken ownership of these initiatives and wish to make them permanent. “It’s interesting to see that the people who have benefited from them are ready to replicate their experiences and share them with other communities adjacent to the park. This is very important and this aspect of the project needs to be further strengthened to ensure the survival and development of the species for which the park is renowned among visitors and tourists,” she concluded.

“These examples of successful implementation of the PAGAP reassure us and prove that the financing of alternative activities, chosen by the communities themselves, is a perfect initiative to reduce anthropogenic pressure on parks. The results on the ground are palpable, and communities have told us that their new economic activities serve to deter them from poaching in the park,” asserted Salimata Diallo Follea, the PAGAP Task Team Leader at the World Bank.

Since the implementation of the IGAs, Pendjari Park authorities have seen a marked decline in poaching and other environmental degradation. On many trails in the reserve, warthogs, elephants, sable antelopes, and Buffon’s kobs observe visitors unperturbed. A regular visitor to the park noted that that it would have been impossible to see the animals so close to the park roads five years ago.

“Income-generating activities have undoubtedly reduced pressures on the park. Today, whenever you are in contact with our wildlife, you get the sense that a certain serenity has returned. What is referred to as the flight distance in our technical jargon (the distance that animals keep between themselves and a threat of danger) no longer exists. Trust has been restored between wildlife and humans,” rejoices Boukari Warakpe, General Director of the National Center for Wildlife Management [Centre national de gestion des ressources naturelles CENAGREF].