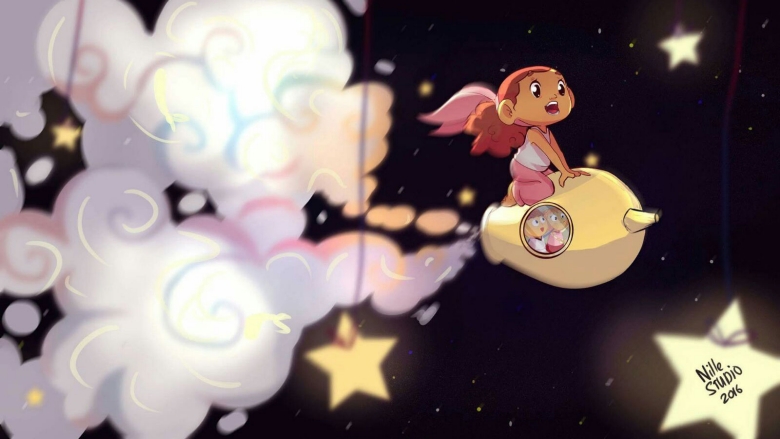 A sample of Danielle’s work. This is a caricature of herself ‘skyrocketing’ to South Korea

D. Parchment
Over the past 10 years, more than 20,000 jobs have been created in Jamaica within the animation industry

Twenty-three-year-old self-taught artist Danielle Parchment, from Kingston, has dreamt of working in animation since she was a teenager. But her progress was initially hampered by learning disabilities and a lack of opportunities in her native Jamaica. So when she happened upon KingstOOn on Facebook, she knew she had struck gold.

Kingstoon, along with DigitalJam, is a World Bank initiative to celebrate the breadth of artistic and digital talent within the Caribbean, and promote its development to boost growth and create quality job opportunities.

As she carefully studied the banner promoting animation internships, she exhaled. Realizing that she would be able to work with the best in the industry in South Korea, coupled with encouragement from her inner circle, she applied.

Now happily settled into her internship at Funny Flux Studios, in Seoul, South Korea, Danielle marvels at the effort required to hone her skills and ignite her passion for animation. Her primary level education was hampered by learning disabilities sparked by seizures, also undermining her social skills “I was always being left out, so I expressed myself through drawings. Words couldn’t adequately convey my struggles as a social misfit,” she reflects.

At Holy Childhood Academy she finally hit her stride when she met peers with learning disabilities and empathetic teachers. She aced high school en route to Edna Manley College for the Visual & Performing Arts. Although they had no major in animation, Danielle fueled by her passion, found a work-around. “YouTube, books, free tutorials online. My family invested in art supplies, allowing me to flourish as a self-taught artist,” she says.

At the ‘ripe old age’ of 21 in November 2015 Danielle coined the label Nille Studio as a chapeau under which to showcase her work, and carve her own little niche in the market. This earned her the respect of peers and role models alike.  In the pipeline is an online outlet for her animation skills. Danielle regards the skills acquired during her current internship, financed by the Korea Trust Fund and managed by the World Bank, as providing the chance for her to contribute to Jamaica’s nascent animation industry.

" I was always being left out, so I expressed myself through drawings. Words couldn’t adequately convey my struggles as a social misfit "

According to Jamaica’s Film Commissioner Renee Robinson, “Over the past 10 years, Jamaica has created more than 20,000 temporary jobs to service the animation industry, along with attracting over a thousand international film projects, and generating J$6 billion (US$7.75)  in capital expenditure. It’s also hoped that growth in the animation sector will boost Jamaica’s overall economic impact."

Coretta Singer, Chair of Jamaica Animation Nation (JANN), is encouraged by Parchment’s move, because, despite the global boom in the industry, female animators are still barely visible and recognized; “Very seldom allowed to lead, we’re almost always locked away churning out those jobs along the pipeline that not one else wants to do. We are often relegated to positions lower than our male counterparts regardless of competences,” she says.

Her advice to Danielle? “Seek knowledge wherever opportunities present themselves and remember that technology is always changing, keep updated. Keep pushing, growing.”

While optimistic about the future of Jamaica’s animation industry, Singer highlights some concerns: “Starting with public education, people still see animation as just art, and that art can’t make money. Then there are Customs duties that put computers and components out of reach. Having to pay US$1500 for a computer and then another US$600 – 1000 to import it, is crippling. Hardcore workstations used by overseas studios cost upwards of US$15,000.”

Singer argues that professional organizations like JANN are trying to mitigate these setbacks, by facilitating a creative space in Jamaica with access to computers where people can collaborate with colleagues and business partners on IPs, practically expanding the space for studios and workshops for focused animation education.

Jamaican Film Commissioner Robinson encourages Parchment and other young animators to remain plugged in to global trends and get used to wearing their ‘business hats’.  “Take ownership for presenting your work. Engage with technological and regulatory trends. The Film Commission also highlights opportunities to showcase your talents at major and developing film industry trade events,” he adds.

Parchment says she fully understands the potential value of Jamaica’s animation industry because of her conviction that there is an unsatisfied market for many rich untold stories from the island with a potential audience much wider than Jamaica and its diaspora. “We just need to be open to young animators with different styles and ideas,” she points out.

For her part, Danielle Parchment remains confident in her abilities and optimistic about her future. After making a success of her Funny Flux internship as part of the character and board design team, she wants to work virtually with US industry giants like Pixar and Cartoon Network while feeding the supply side of well executed Jamaican narratives. She heads for home to start this quest at the end of July.