Coping with Drought Through Cash Transfers in Southern Madagascar 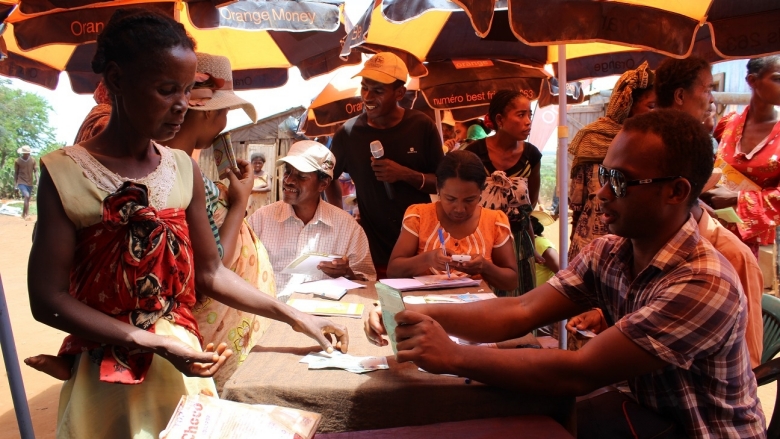 ANTANANARIVO, February 7, 2017─She has lost everything, sold off every possession she owned. In her small hut built of wood, there is nothing left but a makeshift bed without a mattresses or mats, some dirty clothes, and ash─the remains of a meal prepared long ago. There are no pots, plates, cooking utensils, spoons, glasses, or a water bucket.

A 40-year-old mother of 11 children, Ialatsara is lined with fatigue and emaciated by almost three years of drought, the kere as it is called in the south of Madagascar. She holds Natody, her 20-month-old daughter in her arms. The tiny girl is very lean and tired.

Ialatsara and her husband own a small plot of land where in better times, they grew beans, sweet potatoes, and vegetables. However, there hasn’t been a single rainfall in three years, so the land has yielded no crops.

“We had to sell everything last year. The crops were very bad, we had nothing to eat and the children went to school hungry. It was very hard. We could eat and drink some days because friends and family gave us some sweet potato leaves and a little of their corn,” reminisces Ialatsara.

Despite that sober memory, Ialatsara is smiling today. This morning she received 60,000 ariary (about $20), her first cash transfer under the Drought Emergency Program financed by the World Bank. Half of the money, about 30,000 ariary, will allow her to buy what her household needs the most (it is calculated on the basis of an estimated domestic basket), and the other half will serve as a recovery fund to jumpstart subsistence activities that will help rebuild her life and that of her family.

Ialatsara has been waiting impatiently for this transfer since she learned about this new three-year program. She has already made plans about how she will spend the money, starting with buying 200 kapoks of corn that will feed her family for at least a month after so many months of hunger, and by buying chicken to rebuild her subsistence activities that will help her better cope with future shocks. 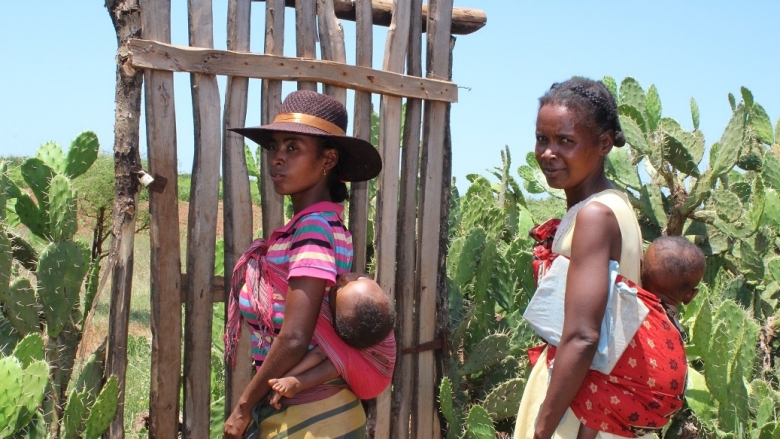 " I regularly attended the training sessions and cooking demonstrations at the Community Nutrition Center. I learned that food diversification was important to having healthy children but I could not afford it. I could not even make a meal a day. But today, I'm going to buy corn and gather vegetables to make a good meal for my family. And before I do that, I am going to buy my pot and spoons back. "

Beneficiary of the Drought Emergency Program 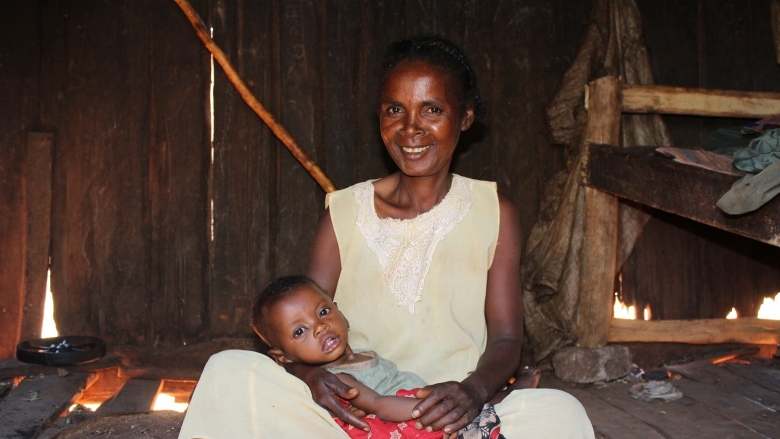 Before retrieving her payment, Ialatsara walks one more time along her barren plot. The rain has begun to fall in Soatsifa, in the district of Ambovombe, since January, so she plans to buy seeds to plant sweet potatoes, beans, and vegetables again. With her 20-year old daughter Sambizotoe, a single mother of 2 children, a 3-year-old and a 6-months-old baby, they plan to buy and raise chicken together. Sambizotoe is also a beneficiary of the program.

“My daughter Sambizotoe is as poor as I am. We could not support each other during the hard times but we promised to help each other by starting a small project together that would allow us to cope with the next drought. We will combine our funds to raise chicken and produce eggs,” says Ialatsara enthusiastically.

Ialatsara and Sambizotoe are among the 68,000 households (more than 350,000 people) benefitting from this $35 million program that provides cash transfers, livelihood recovery grants, and nutrition services to extremely poor households in the most affected districts in the southern regions of Androy and Anosy, notably Tsihombe, Beloha, Ambovombe, Amboasary, and Bekily.

The population of this zone has suffered several successive years of poor crop yields starting with a major locust invasion in 2013. As a result of the El Niño climate cycle, rainfall has been about 75% lower than the average over the last 20 years, causing harvest losses of up to 95%. Over 1 million people are estimated to be food insecure, and among them 35,000 children under 5 suffer from moderate acute malnutrition. Another 12,000 young children suffer from severe acute malnutrition.

This combined cash transfer, recovery grant, and nutrition program called Fiavota, is financed by the World Bank and implemented by the Intervention Fund for Development (FID) and the National Office for Nutrition (ONN), under the coordination of the Ministry of Population, Social Protection, and Promotion of Women over a three-year period. It provides support directly to the female head of household as they are the primary caretakers.

“Mothers are the ones that prepare the food, cook, and care for the health and development of their children. They look out for the whole family’s well-being. Giving funds to mothers is a way to empower women, to allow them take decisions on spending the money on what they think is best for the family,” explains Andrea Vermehren, Lead Social Protection Specialist and World Bank Task Team Leader for the project.