In Maputo, Neighborhood Makeover Changes Resident's Lives for the Better 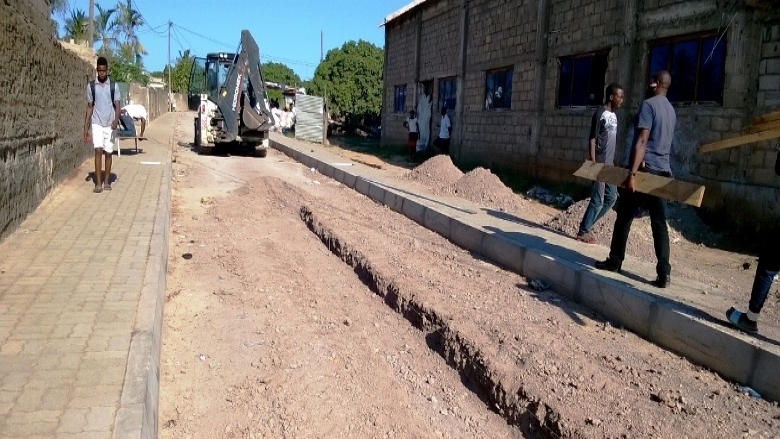 With participation from the community, new walkways were installed in the informal settlement of George Dimitrov.

MAPUTO, January 31, 2017 – The rainy season has always been a nightmare for Afonso Chirindze and his family. As residents of the George Dimitrov informal settlement, four months of rain and the flooding that followed would bring tremendous hardships.

“We would be literally swamped, and would spend a lot more on health care,” said Chirindze, 67. “For a long time, the lack of proper drainage systems and urban planning were at the root causes of that.”

That was before the neighborhood, located in the northern area of Maputo, was upgraded with new drainage systems and paved access roads, as part of the Maputo Municipal Development Program.

“Now I can move around with ease along the paved walkways and streets of the neighborhood,” Chirindze said, with a large smile. “My children no longer need to move away to higher grounds and stay with relatives. And malaria, which was pervasive during that period, is now becoming something of the past.”

With support from the World Bank, the upgrades were completed under the second phase of the program, known as ProMaputo II. About 40,000 residents of the George Dimitrov neighborhood directly benefited from the urban upgrading, including 2,000 children whose school -- which would be closed for months due to flooding-- was completely renovated.

Because of the renovations, Antónia Soquisso, a teacher for more than 12 years in the community, said she felt like the happiest teacher in the world.

“The school results of my pupils, the environment around the school and within the community are among the best,” she said. “In the last year and a half we had no interruptions due to flooding and we had an above-average enrollment rate for the first time in years.”

ProMaputo, which also benefitted from additional funding from the government and the Maputo City Council, focused on interventions aimed at physical, economic and social development. Improvements included providing drainage in flooded areas, pavement works on the main access roads, as well as the rehabilitation of public and recreational spaces, the building of a community center, and improvements in the collection and recycling of solid waste.

ProMaputo II also supported a number of initiatives geared towards income generation and social inclusion. With community participation, new facilities such as a library, a computer training room, a coffee shop, and a covered market with stalls to host vendors were developed.

“With this intervention in George Dimitrov, the Maputo City Council and the community of this neighborhood proved that it is possible to reverse the dire conditions of many other neighborhoods in this city,” said David Simango, the mayor of Maputo.

The George Dimitrov community actively participated during the project formulation by jointly defining priorities and during implementation, and project monitoring and management.

As part of the implementation, the Municipal Council forged partnerships with foundations such as the AVSI Foundation, as well as with the Faculty of Architecture of Eduardo Mondlane University to produce prototype stalls for vendors selling clothes and food products along the public roads and markets. For this purpose, each vendor acquired a stall, paying 30% of the actual value while the remaining 70% was financed by the AVSI Foundation.

To guarantee sustainability of local businesses, a community capacity-building program in business development was implemented, and four projects were subsequently financed in food catering, shoemaking, carpentry and metalworking. The latter, after local consultation and approval of the stall prototypes by the community, built the 85 stalls planned for neighborhood vendors. As a result, local businesses have grown to include more than 800 people, mostly women. In addition, property tax revenue increased almost 300% since the beginning of ProMaputo II, and a land regularization program has delivered more than 25,000 land use right titles. Solid waste management has long been an issue facing the residents of Maputo. As part of ProMaputo II, solid waste is now collected throughout all neighborhoods, benefitting as many as one million people.

“The urbanization of this informal settlement is part of a much broader effort to strengthen the capacity of the Maputo municipality in promoting inclusive and sustainable urban development,” said André Herzog, World Bank senior urban specialist and task team leader of ProMaputo II.

The broader effort includes a new master plan for Maputo, the first city in the country to have one. The master plan also incorporates a municipal environmental plan, and detailed urban plans for 20 neighborhoods. The state of the art municipal information management system covers all main functions of the municipality.