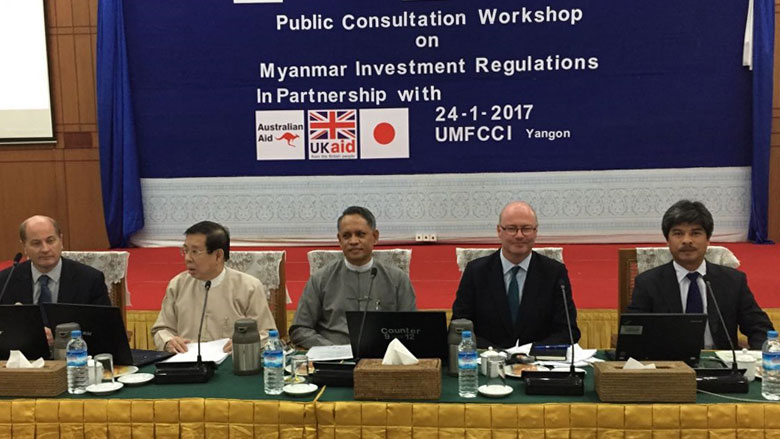 WASHINGTON, January 23, 2017—Myanmar is in the midst of a dramatic political and economic transition. The Southeast Asian nation of 54 million has moved from military rule to democracy, from a centrally directed economy to a market-oriented economy, and is making strides from decades of conflict toward peace, though challenges remain.

Seeking to tap into the country’s enormous potential for economic growth, the government in a few months will begin implementation of a new investment law designed to stimulate and streamline domestic and foreign investment, increase investor protections, and ultimately create jobs and help diversify an economy heavily concentrated in agriculture and extractive industries.

These and other investment climate reforms either approved or under discussion, with World Bank Group support, have the potential to contribute to significant economic growth.

The investment law, passed by Myanmar’s legislature and signed by President U Htin Kyaw in October 2016, was drafted by Myanmar’s Directorate of Investment and Company Administration (DICA) with the support of the International Finance Corporation (IFC). Responding to the government’s request, and under the leadership of DICA, the IFC country team assembled specialists in investment policy and promotion and worked closely with government officials, private sector stakeholders, and civil society in a process that emphasized transparency, consultation, and public engagement. The project received development partner support from Australia’s Department of Foreign Affairs and Trade, Britain’s UKAID, and the Government of Japan.

“Given the special status of Myanmar, a country undergoing significant political transition and economic opening after years of isolation, it was important for civil society and the private sector to be fully engaged in crafting the investment law,” said T&C Senior Director Anabel Gonzalez. “By engaging key stakeholders across the political spectrum, Myanmar was able to maintain momentum for reform through a period of political transition.”

A pro-market reform program initiated by the government in 2012 sought to boost an economy producing the lowest per capita income among East Asian nations. While the policies approved in the initial reform effort helped increase in FDI, they failed to sustain the momentum.

Onerous entry and screening procedures for foreign direct investment (FDI) and domestic investment greatly prolonged the closing of deals. Investment proposals, even small ones, had to go before the Myanmar Investment Commission (MIC) for investors to benefit from protections and receive tax incentives.

Myanmar has great, untapped economic potential. Bordering Bangladesh, China, India, the Lao People’s Democratic Republic, and Thailand, Myanmar sits astride 40 percent of the world’s population. The neighboring economies account for about $15 trillion, or 20 percent, of global GDP. As the largest country in mainland Southeast Asia, Myanmar has one of the lowest population densities in the region, with fertile lands, significant potential for increased agricultural production, and a rich endowment of mineral wealth and natural gas.

Overdependence on one resource or sector—in this case extractives—leaves an economy vulnerable to external shocks. Nearly 80 percent of foreign investment is concentrated in Myanmar’s oil, gas, power, and telecom sectors, with manufacturing accounting for only about 7 percent. Aware of the risk, the government now wants to diversify investments, and has called on the Bank Group’s expertise for help in responding to the recent downturns in commodity prices.

Myanmar’s work on investment policy reform unfolded in the midst of political transition. A governing coalition led by Daw Aung San Suu Kyi took office in April 2016. Throughout the election campaign players across the political spectrum engaged in discussion of the investment legislation, ensuring broad buy-in when the legislature took up the bill.

Extensive consultations were held with civil society and non-governmental organizations. In the first half of 2015, DICA and the World Bank Group team organized three consultations with civil society organizations in Myanmar and a fourth, in Washington, D.C., with international NGOs. These were in addition to consultations with the private sector. The draft investment law was posted on the government website and interested parties encouraged to submit comments. NGOs, donors, CSOs, private law firms, and others contributed more than 200 pages of written comments on the draft law.

“The adoption of a consultation process is an important step in Myanmar—one unheard of a few years ago—and has resulted in a better law,” Daniel Aguirre, a Yangon-based legal adviser to the International Commission of Jurists, wrote in the Myanmar Times.

Thura Ko Ko, a leading business advisor and investment fund manager in Myanmar, said the new law should help the country make progress “toward streamlining procedures and promoting equitable treatment between local and foreign investors… Moreover, I think the swift enactment of the law underlines the clear intent of the new government to continue the pro-investment and reform agenda the country has been undergoing over the past few years.” 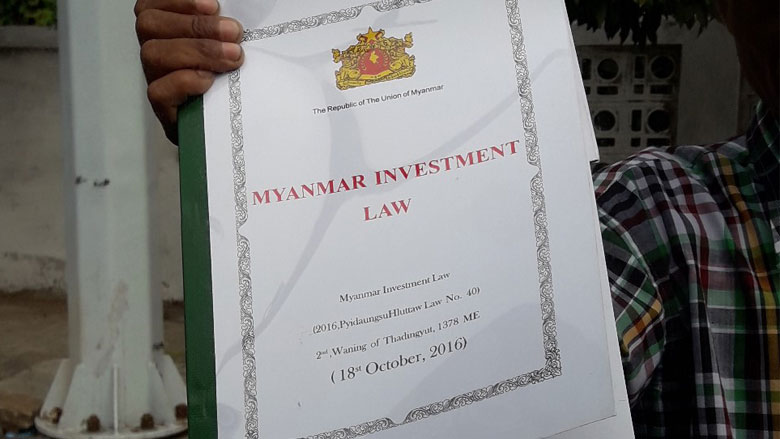 FDI in Myanmar was on the rise even before the new investment law was being drafted, a trend continued during extensive public discussion and debate about the legislation. In 2013, DICA reported approved foreign investment of $1.4 billion. That jumped to $4.1 billion in 2014, doubled to just over $8 billion in 2015, and was up 18.4 percent to $9.48 billion in 2016. 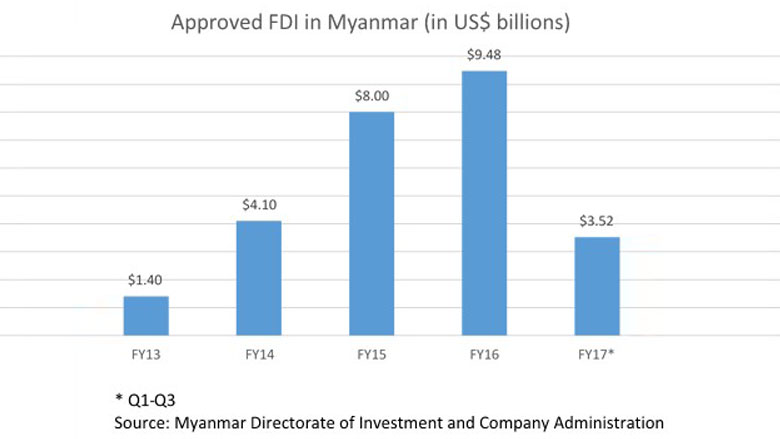 But FDI in Myanmar is volatile, as the most recent reports indicate a sharp downturn in the first three quarters of FY17, heightening the urgency of getting the reform implementation under way.

The government has identified manufacturing—particularly labor-intensive manufacturing—and agriculture and food processing as priority areas for economic diversification. Early indications, based on recent investment deals, suggest that industries ranging from beer and toiletries to telecommunications and high technology are among areas of investor interest.

The goal is to expand job opportunities in Myanmar and to increase the competitiveness of domestic businesses as they enter into deals with foreign investors and increase their participation in international trade.

Meeting at the White House on the eve of the legislature’s vote on the Myanmar investment legislation, State Counsellor Daw Aung San Suu Kyi made the pitch directly to the press corps.

The Bank Group team is working with the government in three investment policy areas: improving the legal and regulatory framework; simplifying administrative procedures and establishing support mechanisms; and rationalizing investment incentives to focus government attention on the areas with the greatest potential for private sector growth.

Specific improvements resulting from the investment law are expected to include reducing the time required to obtain MIC approval from six months to three; cutting in half the number of firms required to obtain MIC approval before gaining market entry; and implementing increased investor protections against unfair treatment and expropriation of property, among others. The new law also introduces an innovative mechanism to detect and address investor grievances at an early stage to avoid escalation into open disputes requiring international arbitration.

The project’s long-term impacts flow from Bank Group support for promoting inclusive growth and jobs creation, enabling the broader population to participate in and benefit from Myanmar’s economic reform, increased access to finance for rural and micro borrowers, and support for development of key infrastructure. 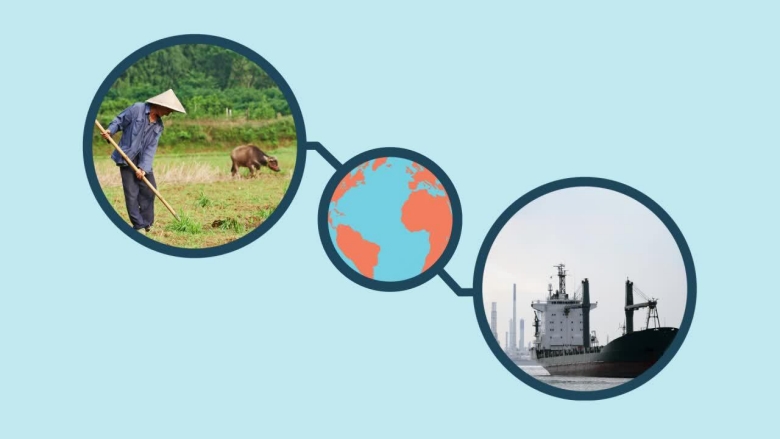