Each year, the World Bank’s Water Cartoon Calendar shines a spotlight on the challenges that remain in the area of water supply, sanitation and hygiene, and their link to poverty reduction.

The issues are complex and sensitive. Despite impressive gains over the past several decades, basic services are still lacking:

The 2017 Cartoon Calendar serves as a reminder that there is still much work to be done. It was first launched in 2000 by the World Bank’s Water and Sanitation Program (WSP), the same year the Millennium Development Goals were announced. It remains a powerful tool to shape important advocacy messages for World Bank partners and the general public, and to strengthen the voices pushing the WASH agenda forward.

Although water and sanitation touch people’s lives every day, they do not get the attention they deserve, in particular as the topics are difficult to discuss in many cultures.

By using humor to carefully craft colorful cartoons with a tongue-in-cheek message, serious global concerns are introduced in an informal manner to a larger audience.

Every year, creative and passionate artists from around the world are invited to illustrate the messages. This year’s four cartoonists are:

As the world moved from the Millennium Development Goals to the Sustainable Development Goals (SDGs) in 2015, the global goals for water also moved beyond targets for basic access to water and sanitation to addressing the more difficult challenges of achieving universal access to safe water and improved sanitation, protection of water resources, ensuring sustainability of water use and reaching the poorest and most vulnerable.

This shift has been captured in the calendar’s cartoons. Improved services — combined with an integrated management of water resources — can generate transformational benefits for poor people and the economy at large, freeing up time previously used to collect water, improving health and preventing disease spread through dirty water or poor hygiene. The calendars of recent years not only shed light on the issues involving water and sanitation sustainability and security, but also spur dialogue on sensitive topics which otherwise are rarely discussed in public.

To support the mission of a water-secure world for all under the SDGs, the World Bank Group and its partners are launching a new program, the Global Water Security and Sanitation Partnership (GWSP), in the first quarter of 2017. Under the auspices of this program, the Water Cartoon Calendar will carry on its tradition of raising awareness around critical global water issues through humor. 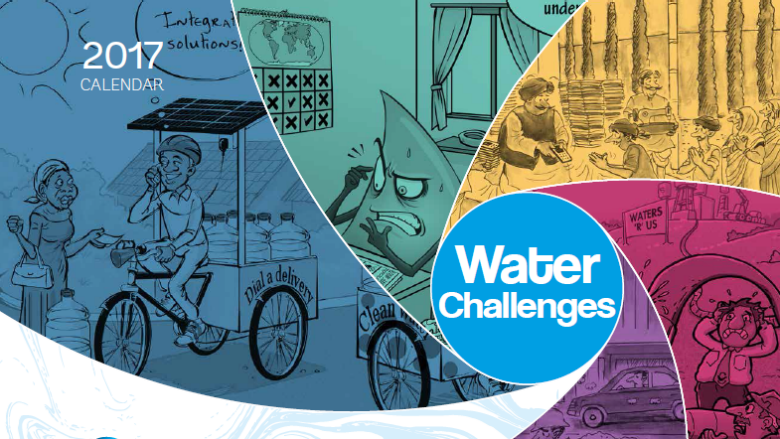