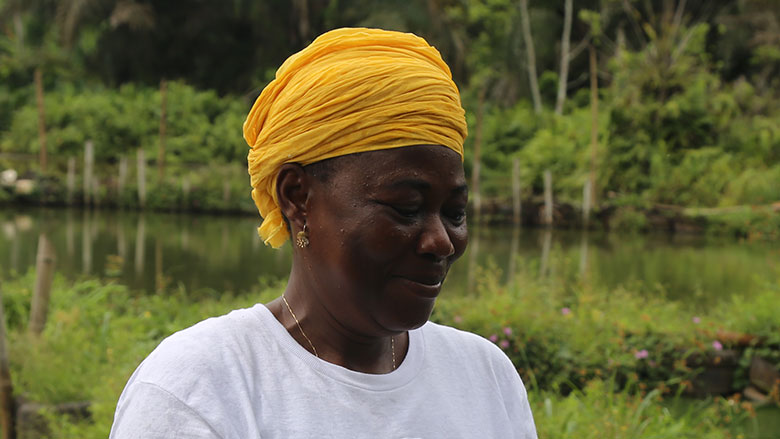 ZINVIÉ, January 17, 2017 ─ Located some 40 kilometers from Cotonou, the Johan Estève agro-fisheries complex in Zinvié-Zoumé in the Abomey-Calavi commune is a multipurpose farm that is innovating agricultural and fish farming practices. Eugénie Faïzoun, the manager of the complex, is carrying out her farming activities with great enthusiasm on a long four-hectare field that slopes toward a mangrove. “Here I have 3,500 egg-laying hens, a few sheep and goats, rabbits, ducks, one hectare of plantains, and a small market garden area. I also have another field with three hectares of palm for oil and plots for seasonal crops,” she revealed proudly.

Faïzoun used a cost-sharing subsidy amounting to CFAF 14.6 million (close to $24,000) from the World Bank-financed Agricultural Productivity and Diversification Project (PADA) to completely overhaul her farm over the past two years. “Support from PADA helped me construct five fish ponds for tilapia and catfish fingerling production, purchase a high-capacity generator, drill a borehole, and purchase genitors,” she noted. As a result, tilapia fingerling production has increased from 75,000 to 128,600, and catfish fingerling production from 50,000 to 75,000. Her sales have soared and Faïzoun has reinvested a huge portion of this money in boosting fish production.

With the help of another World Bank-financed project, the West Africa Agricultural Productivity Program (WAAPP), Eugénie was also able to obtain a better breeding stock to improve production quality and quantity. 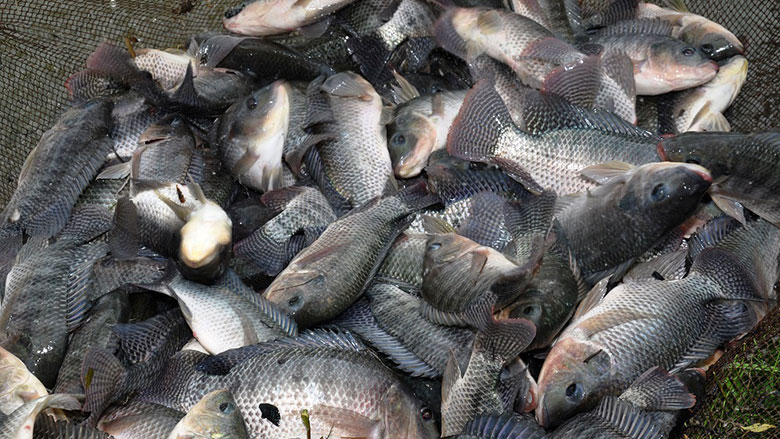 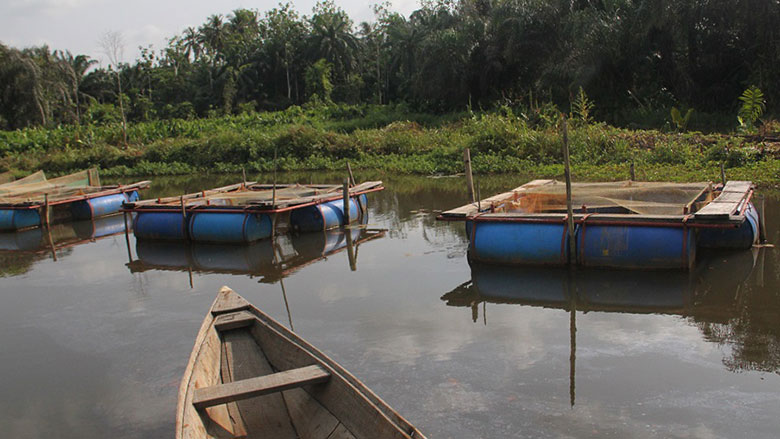 All of these undertakings and innovations have provided unique expertise to the Johan Estève agricultural complex that now serves as a farming school for many fish farmers from Abomey-Calavi and surrounding communes. “I have already trained 227 individuals under projects financed by Japan and the World Bank,” she stated. Marcel Aklassato Kpatindé, a fish farmer in Pahou (Ouidah commune), is one of her former students. “Eugénie trained me in the fingerling insemination technique, which I knew nothing about. I’m telling you, this lady is a role model in our profession.”

Faïzoun has also forged an informal partnership with the Faculty of Agricultural Sciences at the University of Abomey-Calavi, which frequently sends volunteers to train at her farm. This is also the case with the Médji Agricultural School in Sékou, whose students go to her farm to learn about animal production.

Faïzoun, who also chairs the Union régionale des coopératives de pisciculteurs de l’Atlantique, began more work to expand her production facility a few months ago. “I have started clearing the trees from the river. The plan is to create an artificial lake and set up floating cages and enclosures there,” she disclosed. Over the medium term, she plans to exploit two potential hectares of surface water with an investment totaling roughly CFAF 100 million. To implement the first phase of the project, she applied for a loan worth CFAF 20 million from the guarantee fund set up by PADA. This money will essentially be used to purchase five enclosures (CFAF 15 million). While awaiting a response to her loan application, she cleared a section measuring 2,800 square meters on which she installed one enclosure and three floating cages provided by PADA.

Faïzoun would also like to stop importing pre-fattening fingerling feed. “Importing feed is too costly for me. One kilo of imported tilapia feed costs between CFAF 800 and CFAF 1,000, while one kilo of what I make myself costs CFAF 350. My problem is that I cannot produce pre-fattening feed without an extruder.”  There are currently no extruders for industrial production available in Benin. To find one, one would have to travel to Ghana where a foreign company produces feed and sells it to several African countries. However, this has not discouraged Faïzoun who recently learned that small extruders can be acquired in Benin for roughly CFAF 50 million.

Faïzoun has had an exemplary career, and was even awarded the prize for the best fish farmer by the Japanese International Cooperation Agency (JICA) in 2013. She has not regretted her decision to give up accounting management studies to devote herself to fish farming, her real passion.  “I am really proud of the fact that I have succeeded in an area in which many men have failed,” she admitted.  She has used the income earned by her farm to purchase property and provide a good education for her two daughters who are enrolled in universities in Canada.