The Sky is the Limit for the Nyagatare Rice Farmer 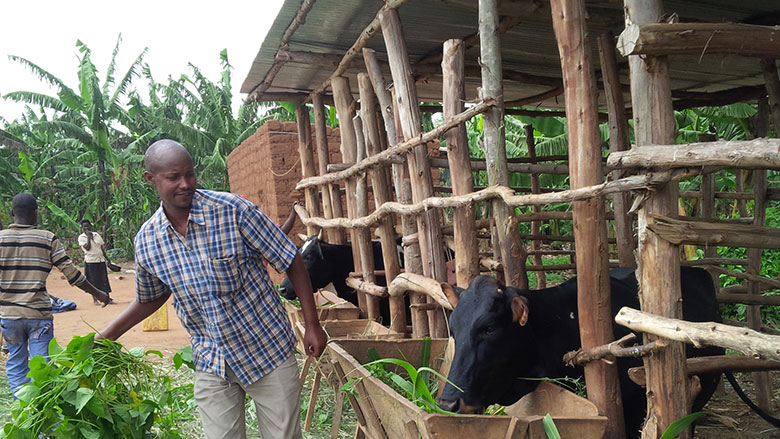 With his success and stable income from rice farming, John Muyango has been able to go back to his first love of cattle keeping.

NYAGATARE, December 20, 2016 – Standing proudly in front of his new, four-bedroom house, 45-year old John Muyango, a resident of Kayigiro village of Nyagatare District, is a content man. Five years ago he made the difficult decision to convert from a cattle keeper to a rice farmer. His success was almost instant.

“At first, I was reluctant to venture into rice farming, which I considered more demanding and requiring heavy investments than cattle keeping,” Muyango said. “I soon realized I was wrong.”

Nyagatare, a town in the Northeast, is the country’s livestock base, where the traditional practice of keeping cattle requires big pastures. Coupled with the demands of agriculture, which is also widely practiced, there is limited land available to support the village’s most prominent economic activities.

Faced with these challenges, Muyango knew that he would be unable to continue to rely on livestock income to sustain his family of 10. So, when Muvumba marshland was developed through the Rural Sector Support Project (RSSP) bringing rice farming to the village, he was among the first to embrace the idea.

He converted his two ha of pasture land into a rice farm, a decision he said he has never regretted. He is harvesting close to 11 tons of rice from his farm, and was able to build the new house, worth Rwf17 million, and pay school fees for his children with ease.

“This is almost unbelievable,” he said, beaming. “I had never imagined I would achieve this much so fast, let alone through rice farming.”

Muvumba marshland is one of several areas that has been developed under the RSSP, which aims to increase the agricultural productivity of organized farmers in targeted marshlands and hillsides of sub-watersheds, and strengthen market-based value chains. Funded by IDA, the World Bank’s fund for the poorest countries, more than 7,400 hectares of marshlands have been rehabilitated or developed, benefitting more than 343,240 people, 42% of them women. RSSP has also helped to put in place a number of rural infrastructures to link productive areas to markets, increasing trade and increasing farmer’s incomes.

The project has also built a dam, and it provides training for farmers in improved rice farming techniques, as well as seeds and fertilizers, and helps to build individual farmers’ capacity in entrepreneurship, managerial and marketing skills. The project has also helped them to form a 586-member Rice Farmers’ Cooperative, COPRIMU, and put in place post-harvest infrastructure, including five drying grounds and a 1,500 tons capacity storage facility.98% of the supported farmers have adopted improved farming methods, and 86% of supported marshland use fertilizers, compared to 30% of the rest of the farmers nationally. The rice yield in developed or rehabilitated marshlands has doubled from 3T before the project, to more than 6T per ha, increasing farmers’ income from rice sales.

Not only has Muyango become a successful rice farmer, with increased financial stability, he was also able to go back to his first love – cattle keeping. At the cost of Rwf 300,000 each, he bought three Friesian cows, which is he able to feed at home. . They produce more milk than the long-horned local breed he used to own, and they give him manure for his rice farm, which he plans to expand.

“I am currently investing in buying more paddies in the marshland,” he said. “Five years from today, I see myself among the most successful rice farmers in Rwanda.’’