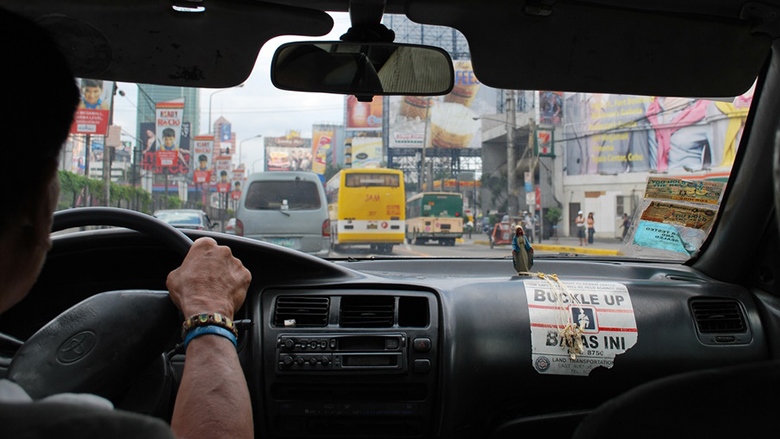 Inside a taxi in Manila, Philippines. Photo: Trish/Flickr

Congestion in metropolitan Manila costs the economy more than $60 million per day, and it is not atypical to spend more than 2 hours to travel 8 km during the evening commute there. But beyond these statistics, until recently, very little was actually known about Manila’s congestion, because the equipment and manpower required to collect traffic data has far exceeded available resources. Most cities in developing countries face similar issues.

Traditional methods of collecting traffic data rely either on labor-intensive fieldwork or capital-intensive sensor data networks. The former is slow and results in low-quality data, and the latter requires substantial capital and maintenance outlays, while only covering a small portion of a metropolitan area. In the era of big data, shouldn’t we be able to do better?

Responding to this need, Easy Taxi, Grab, and Le.Taxi, three ridesharing  companies—which, combined, cover more than 30 countries and millions of customers—are working with the World Bank and partners to make traffic data derived from their drivers’ GPS streams available to public through an open data license. Through the new Open Transport Partnership, these companies, along with founding members Mapzen, the World Resources Institute, Miovision, and NDrive, will empower resource-constrained transport agencies to make better, evidence-based decisions that previously had been out of reach.

Issues that this data will help address include, among others, traffic signal timing plans, public transit provision, roadway infrastructure needs, emergency traffic management, and travel demand management. According to Alyssa Wright, president of the US Open Street Map Foundation, the partnership “seeks to improve the efficiency and efficacy of global transportation use and provision through open data and capacity building.”

The idea of the Open Traffic Partnership started in the Philippines, when the government approached the World Bank with the request to help them identify, implement, and iterate solutions to traffic challenges. To allocate scarce resources towards solutions that would have the greatest impact, the Philippine cities would need better, more timely data about accidents and traffic flows, as well as low-cost tools to analyze and make sense of this data.

In collaboration with the leading taxi hailing app company in Southeast Asia, Grab, the Bank team developed a pilot open-source platform, for using anonymized GPS data generated by more than 500,000 Grab drivers to analyze traffic congestion peak patterns and travel times, with an ease and level of detail that was previously inconceivable. Using this platform and road incident data, city governments in the Philippines could, for the first time, answer the fundamental questions necessary to address safety and congestion—Where and when is congestion most acute? Where and when are our citizens most vulnerable to road incidents? And most fundamentally, when we invested in interventions to mitigate accidents or congestion, did these investments work? What was their impact? Could we have done better?

The open-source platform leverages open-source software and big data partnerships to substantially reduce the cost of traditional traffic data collection and analysis, while simultaneously improving quality. This is the first scalable open-source program of its kind, empowering less-advanced economies to leapfrog a stage in their intelligence transportation systems development.

Building on the success of the Philippines pilot program, the World Bank along with a number of  rideshare companies and  mapping and navigation services companies has launched the Open Traffic Partnership (OTP) to develop the global architecture for combining anonymized traffic data. “The beauty of the initiative is that we can integrate anonymized data from multiple sources—vehicle and taxi fleets, yes, but also companies and cities collecting vehicle counts, public transit GPS data, goods movement data, and others—to create a comprehensive picture of cities’ and countries’ transportation networks,” said Kevin Webb, Open Traffic Program Advisor with the World Bank.

The US-based National Association of City Transportation Officials (NACTO) and the World Resources Institute are also working with the OTP to build government partnerships, helping transport agencies use these new data to support better traffic management and planning. Through these global public data goods, governments, together with the private sector, will be able to effectively shape their transportation futures, ensuring equitable and safe access for all. World Bank Senior Transportation Economist Holly Krambeck said, “We want to prove that it is possible to have a world, where private companies that contribute data as public goods not only make society better off, but themselves as well.”

Further information about the Bank’s Open Traffic platform project may be found here.