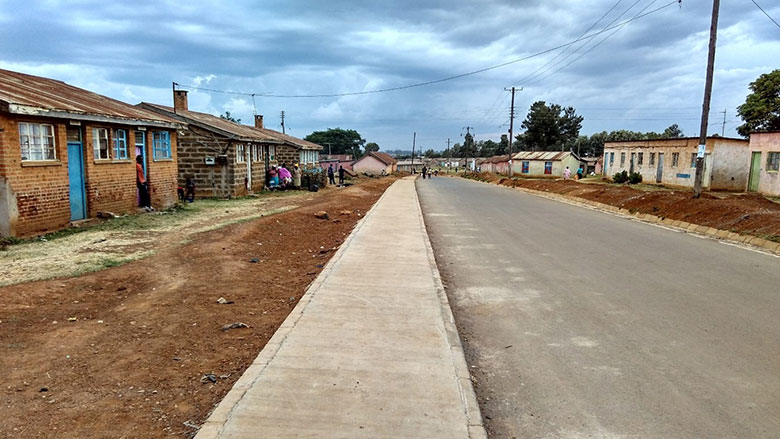 New footpaths have contributed to resident’s safety in the informal settlement of Eldoret, where pedestrians had been forced to walk in the road in certain areas.

NAKURU, November 30, 2016 – Twice a year, rains used to cause flooding through the informal settlements of Kaptembwa, Gilani and Kwa Rhonda. Situated in the low-lying landscape between the Rift Valley escarpment and Lake Nakuru, the three settlements are in the path of the natural water flow as rainwater makes its way to the lake. While Nakuru town has a drainage system, the drains did not extend into the settlements.

“The flood water used to turn the narrow paths into fast-moving rivers as rainwater rushed through on its way to the lake,” said Juma, a resident of Kaptembwa. While many residents could not leave their houses until the water subsided, Juma and his family would be forced out of their home due to flooding.

Urban areas are growing quickly in Kenya. With a population of approximately 44 million, the country is urbanizing at about 4.4% per year, and 27% live in urban areas. By 2050, half of its population is expected to live in urban areas. Urbanization holds the prospect of driving economic growth, reducing poverty, and expanding access to jobs, housing and services for an increasing share of the population.

However, at the current urbanizations rates, the urban infrastructure and service delivery is not keeping pace with the growth of the urban areas; a World Bank survey of 15 urban areas showed that access to sanitation is below 30%, and while water access was at 90% in the 1990s, it has been decreasing as populations are growing.

Since its start in 2010, more than 1.7 million people have benefitted from KMP infrastructure investments including the financing of about 43 kms of access roads, and 68k urban residents now have access to all-season roads within a 500-meter range.

Under KSIP, more than 530k have benefitted from improved infrastructure since 2011, including about 30 kms of rehabilitated settlement roads, 30 kms of footpaths also completed.

In Jomvu Kuu and Ziwa la Ng’ombe informal settlements in Mombasa, improved roads, together with footpaths, have eased the transportation of goods such as clay pots crafted by women. The new road infrastructure has facilitated economic activities within the community as more goods are readily available in the settlement. Previously, small-scale traders had to travel further in search of goods to retail.

Between KMP and KISIP, about 714 streetlights and floodlights have been installed across the 15 urban areas. To further stimulate urban economic activities, three markets – a traders’ market in Eldoret and two livestock markets in Garissa and Machakos – have been completed under KMP.

Residents said that security has improved significantly because of the high-mast lights.

“I am now able to keep my business open till midnight, unlike before when I could close by 7pm,” said Juma, an entrepreneur.

In Eldoret, Nakuru and Mombasa, the provision of non-motorized transport (NMT) facilities has also contributed to resident safety by reducing the conflict between pedestrians and motorized transport. Prior to the completion of the facilities constructed by KMP, pedestrians were forced to walk on the road in certain parts of Eldoret town. About 38km of NMT has been provided in this town and now an average of 390 pedestrians, young and old, use the footpaths every hour, with the number increasing to 655/hour during the morning commuting hours. In total, about 150 km of NMT has been constructed by KMP.