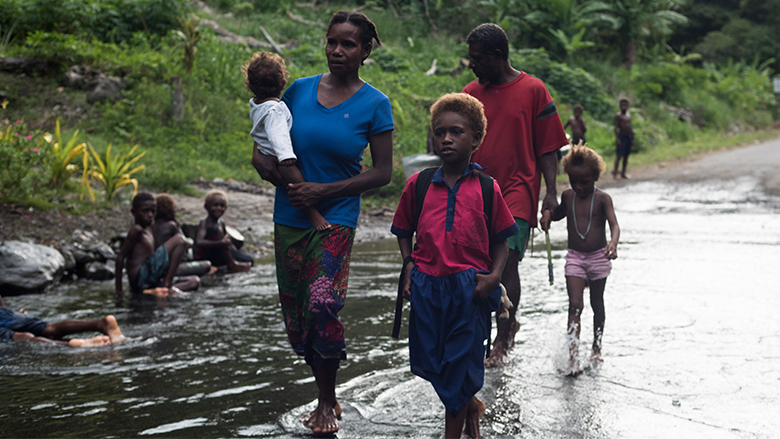 Evangeliza, her mother Bernadette, father Luke and younger sister Ecclesias Stica walk home from school to their village in northern Guadalcanal Island, the main island in the Solomon Island archipeligo. Evangeliza must walk 10 kilometres each way to school from her home.

Bernadette Tahiseu lives with her husband and nine children, along with four infant grandchildren, in a single thatched hut with walls made of tarpaulin and dried palm leaves.

At 43, she and her husband Luke are both uneducated and unemployed, lacking money to rebuild their former cement house in a small seaside village on the northern coast of Guadalcanal in the Solomon Islands.

They live off food they grow, such as sweet potatoes and cassava, and sometimes plant watermelon and cucumbers to sell for money. Most days, all they can provide is one meal for the family.

Despite such hardship, it’s better than during The Tensions, the five-year period of ethnic conflict between militants from the islands of Guadalcanal and Malaita. Bernadette is from the Guadalcanal ethnic group while Luke is part-Malaitan, which put them at particular risk during the violence that engulfed the Solomons between 1998 and 2003.

“When conflict broke out, all the people in the village fled into the bush,” Bernadette recalled, describing makeshift shelters of leaves and sticks with no food except what they could find or grow.

“We stayed there for couple years,” she said. “We were really frightened, terrified. … Some days we couldn’t cook because we heard gunfire. We just stayed hidden. I found it very hard because I had a small child and life in the bush is tough. All I thought about was just to get food, eat a bit, feed my child and then sleep.”

Their former house burned down in the unrest, but any money they can get today goes for more immediate needs – clothing, food and school fees.

It has been 13 years since an international intervention ended The Tensions, but families like Bernadette’s still feel the impact of conflict. Despite primary school fees of 50 Solomon Island dollars (equivalent to $6.43 U.S.), Bernadette and Luke can only afford to send their secondary-age children.

In March, an aunt provided money for Evangeliza, age 9, to attend school for the first time. Until then, she had been kept at home to look after her younger sister, nieces, and nephews. In her first week of school, the girl learned how to write about things in the sea — fish, turtles and whales. 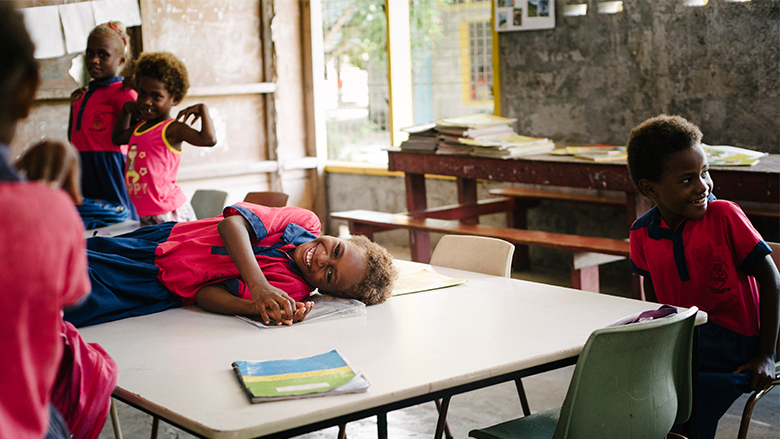 Evangeliza plays at school. In Solomon Islands only 18.9% of the population have a secondary education, and only 87% complete primary school. Evangeliza first attended primary school the same week this image was made, as a 9 year old. Due to the cost of school fees - $50 SLD per semester ($6.40 USD) - her mother kept her at home, prioritizing the education of her elder siblings. A fee payment by Evangeliza's aunt allowed her to attend the school for the first time in March 2016. 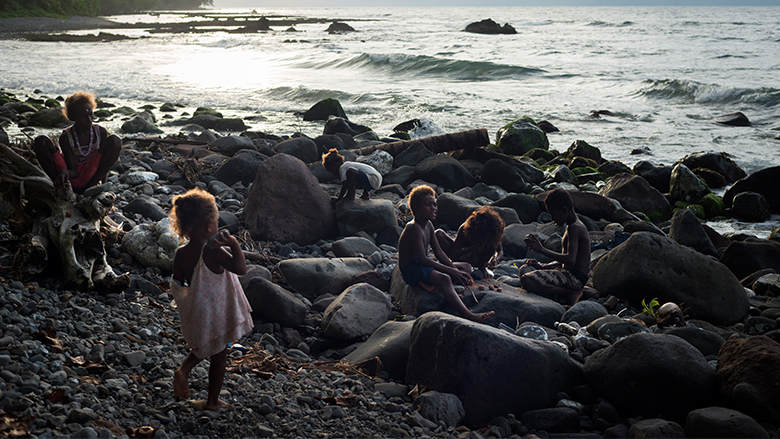 Evangeliza and her siblings, cousins and nieces crack nuts with rocks on the shoreline outside their village on the north coast of Guadalcanal Province, Solomon Islands.

“Evangeliza is very willing to go to school,” Bernadette said. “When she wakes up but we don’t have any breakfast, I tell her to stay at home because she’ll be hungry and won’t be able to learn properly. But she won’t listen and will go to school anyway. That’s the way she is, Evangeliza. It doesn’t matter that she hasn’t eaten, she’ll still go to school. That’s her way.”

For Evangeliza, school means the chance for something more in life.

Bernadette sees the same future for her daughter.

“My girl, Evangeliza, I want her to do well in her schooling, so that when she finishes school she must have a good job, a job that will pay her well,” Bernadette said. “When I look to future I can see that life will be very hard. If kids are not well-educated, then their life will be difficult. They must go to school to get a good education, get good jobs in order to have a good life. It will make life easier.”

Still, always lurking in her mind, is the fear of more violence.

“For us, the ordinary people, we’re good and happy with the reconciliation that’s already taken place,” she said. “We’re done with it, but I don’t know about… [what] might happen after we die, in the next generation, with our kids, grandkids in the future. The Tensions might return.”