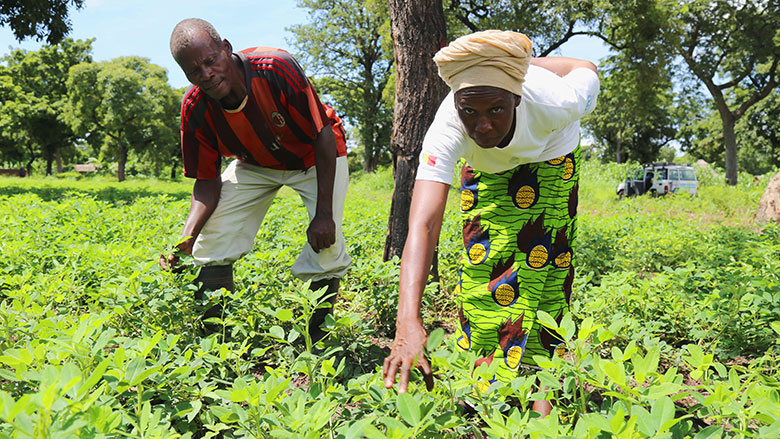 Daniel Debah, President of Seed Producers, an association certified by Chad’s National Office for Rural Development, maintains his peanut crops alongside his wife.

N'DJAMENA, October 31, 2016 – In Gondjé, a large refugee camp lost in the forest not far from Goré, Daniel Debah has made a name for himself as the president of Seed Producers, an association certified by the National Office for Rural Development (Office national de développement rural or ONDR). Surrounded by his fields of groundnuts and sorghum that stretch as far as the eye can see, he could hardly conceal his satisfaction. “I produced all these crops using the seeds that the project distributed to us. I started out with only a few plots of land, and now, look at all this land,” he gushes. “I can now sell my seeds and feed my family, all thanks to my crops.”

Chad has the highest ratio of refugees to population of African countries. In 2013, Goré and its environs, located 600 kilometers to the south of the Chadian capital, N'Djamena, confronted an unprecedented inrush of refugees and returnees fleeing the outbreaks of violence that rocked the Central African Republic. Three years after their settlement, projects such as the World Bank-financed Emergency Food and Livestock Crisis Response Project are helping nearly 70,000 people begin the process of rebuilding their lives. By giving them the means to return to their agricultural and livestock activities, the project has allowed them to meet their nutritional needs and take back up their livelihoods.

Debah is one of countless refugees who sell their crops at the large market outside the Amboko refugee camp. Also among them is Saint-Cyr Redeybona, who shared his experience: “A year ago, I obtained one bag of unshelled groundnut seeds. From this, I harvested four bags of shelled seeds that I sell for 10,000 francs CFA each.” This income of roughly 40,000 francs CFA will go toward taking care of “household needs and clothing for my family.”

Others like Maxime Nodjindo are investing in cassava crops. Nodjindo now supplies cassava cuttings to Gondjé’s demonstration plot (used for teaching farming techniques), set up by ONDR with money from the project. This activity guarantees him “a steady income,” he explained. 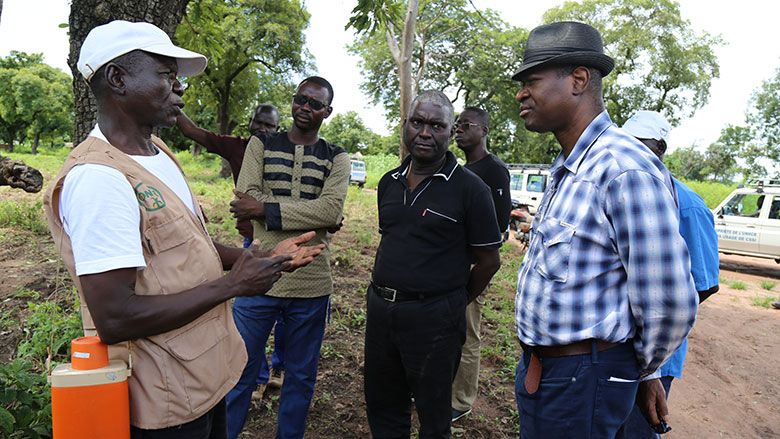 Adama Coulibaly (right), World Bank Country Manager for Chad, speaks with a field coordinator from the ONDR in charge of accompanying the refugees.

A recent project appraisal carried out by the Food and Agricultural Organization (FAO) revealed that project benefits are being enjoyed by refugees and host populations alike. “In a total of 12 villages, two returnee sites, and three refugee camps, upwards of 1,500 households benefited from groundnut seeds, while another 750 were provided with sorghum and millet seeds,” stated Ningaro Djimasdé.

In addition, the Head of the Livestock Division notes that “173,694 head of cattle owned by 2,512 livestock producers received the necessary vaccinations, care, and anti-parasitic treatment delivered by Goré’s livestock sector.” Tchindebe Patekori further discloses that “approximately 500 metric tons of cattle cakes and bran were also distributed to help refugees meet the urgent  nutritional needs of their herds, thereby averting a disaster.”

Nowhere is the success of the efforts to involve refugees in agricultural activities more apparent than in the opening of an agricultural inputs store in the heart of the Amboko market, where all locally-grown seed varieties are sold. Technical support for the store is provided by the National Bureau of Seeds and the National Agricultural Research Institute for Development (ITRAD), which monitors seed quality. “It has been so successful that when the need arises, the FAO purchases seeds there for redistribution to various communities,” noted Djimasdé Ningaro.

In an effort to assist the Chadian government handle this major crisis, the FAO and other international agencies have lent their support to implement the World Bank-financed Emergency Food and Livestock Crisis Response Project. “This joint response was the best possible choice, considering the strong complementarities between the UN agencies and the World Bank in terms of their respective mandates, capacities, and comparative advantages,” remarked Adama Coulibaly, World Bank resident representative for Chad, while on a visit to the area.

During his visit to the refugee camps, accompanied by the resident representative of the United Nations High Commission for Refugees (UNHCR) in Chad, Coulibaly went on to “applaud the hospitality of the host populations who facilitated the successful execution of the project.” He framed the emergency operation as an appropriate tool for the humanitarian crisis, bringing speedy assistance to the most vulnerable and hardest hit by the food crisis, while helping the country to embrace the plight of the refugees and help them to become self-reliant.