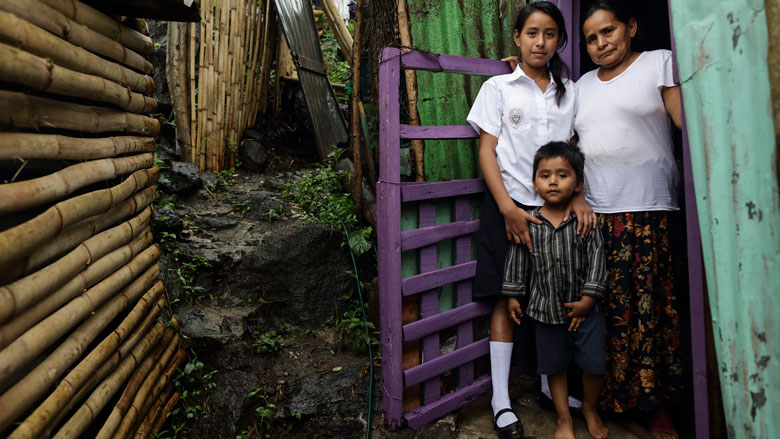 Carolina Silva Gómez, her mother and nephew in their home in La Libertad, El Salvador

The World Bank
Quality education, access to water and sanitation, and connectivity are essentials for a promising future.

Latin America and the Caribbean have made important social gains in the last twenty years. Yet, the region remains one of the most unequal region in the world where the level of education and income of parents determine whether their child will have the same opportunity to get a good education, and live in a home with running water, proper toilets, 24hour electricity and internet connection.

In the region today, more than a quarter of its population is below the age of 14. Yet, many children are left behind without any hope for a good and productive future. One in five young people between the ages of 15 to 24 in the region are neither studying nor working, and most of them are women.

World Bank experts on poverty in Latin America and the Caribbean take a closer look at how the region is faring in terms of giving equal chance to young Latin Americans to have a productive life, and what it means in terms of access to quality services and opportunities. For our children #OpportunityIs about:

Having a good education
Every week, public school students in Latin America and the Caribbean are deprived of the equivalent of one full day of class due to teacher absenteeism, low skill level and pay, and weak school leadership. A good education is one of the key opportunities for success. Twenty one year old Jamaican Chevano Baker is one of the lucky ones whose family’s enrollment in Jamaica’s conditional cash transfer program PATH allowed him to get a good schooling. Chevano is now starting his Master’s degree in Financial Economics at the prestigious University of Birmingham in the UK.

Running water and sanitation at home

Evidence show children grow taller and learn better in communities where residents have access to improved sanitation and do not defecate in the open. In Nicaragua, many Water and Sanitation Committees led by women, have improved access to water and sanitation to more than 1 million People. "The families are happy because they have sinks, showers and toilets" explains Angela Durand, a neighbor who coordinates the local Water and Sanitation Committee (CAPS, in Spanish).

Less than one in ten poor families have internet connection in the region. More households in developing countries have a mobile phone as oppose to access to electricity or clean water. Investing in the digital economy can not only promote innovation, but also inclusion and efficiency. In rural Peru, the advance in mobile connectivity allowed greater access to information and helped boost job creation and reduce poverty reduction by 8 percent according to the World Development Report 2016.

Tell us what you think and join our online conversation and a live debate with Program Manager on Poverty Oscar Calvo Gomez on Monday, October 17 at 12PM via Facebook Live de Banco Mundial.