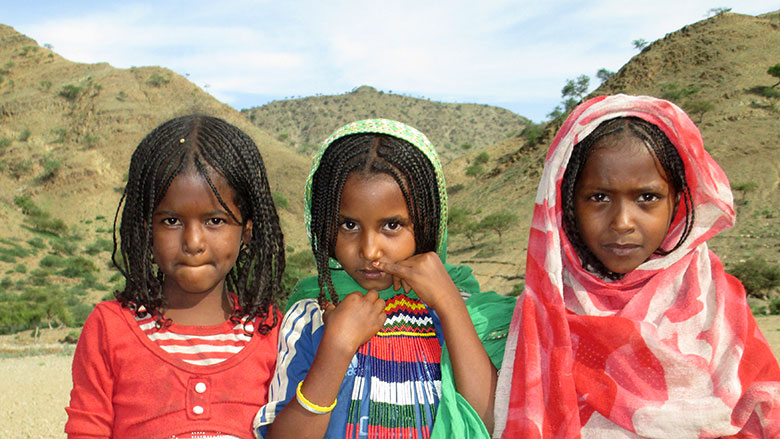 Children from the Afar Region of the country attend a school built by the Pastoral Community Development Program, a project that helps pastoral communities by improving access to demand-driven social services and infrastructure.

AFAR, October 6, 2016 – Pastoralism is a way of life for 12 million Ethiopians. Because they are located in the remotest and most inaccessible areas of the country, pastoralist communities have historically been economically and socially marginalized and underserved in terms of basic social services and economic infrastructure.

Over the past 15 years, the World Bank Group (WBG) has been supporting the Ethiopian government’s efforts to alleviate some of the challenges facing pastoralists through the Pastoral Community Development Program (PCDP), which is currently in its third phase.

The project is helping to strengthen local government institutions, improve access to social services and economic infrastructure, and improve the efficiency of traditional livelihoods while diversifying pastoralists’ dependence on livestock production. Through awareness creation and the introduction of innovative practices, PCDP is also reducing long-term environmental degradation and communities’ vulnerability to climate change related droughts.

Ethiopia’s Afar region is known as one of the harshest environments on earth. Aboyta Kebele, in Afar’s Chifra wereda, is one of the villages in which the project is being implemented. For the past consecutive 10 years, Aboyta has been affected by drought.

“This used to be considered hopeless land because of the floods. Now we all came together, built flood protection walls and irrigated the land making it fertile. We now produce excess maize and vegetables which we sell for profit,” said Hussein Naina one of the 4.5 million beneficiaries of PCDP.

The project is also facilitating access to crucial social services such as education, health care and water supply to under-served communities by constructing key infrastructure such as safe water sources, animal health posts, local clinics and schools in remote areas.

“Since we depended on rainfall which often fails, getting water was our biggest challenge. We had to drink flood water,” said Sheik Habib another beneficiary from Kuntola Kebele. “Now, with the water point built under PCDP, our children are healthier because they drink clean water.”

PCDP’s focus on empowering citizens enables communities to identify, lead and manage local development initiatives which are leading to improved livelihoods in terms of growth and stability of incomes, health, nutrition, and education status.

The project has also helped the government establish 470 Savings & Credit Cooperatives (SACCOs) in regions where populations, particularly pastoralists, have limited access to banks and other financial service providers. Through SACCOs, pastoral communities have been able to jointly save and create revolving loan funds for their members to finance income generating activities, such as, goat & sheep fattening, cattle rearing and processing of meat and dairy products and increasing agricultural production.

“I borrowed ETB5000 ($230) from our SACCO and started a small beverage business by the lake, I started selling coffee and beer and quickly repaid my loan,” said Sire, a PCDP beneficiary in Dassenech, South Omo, SNNP region. “Now I am making enough money to take care of my family and my two boys graduated high school and are now in college.”

The project is implemented in 113 pastoral and agro pastoral woredas of the Afar, Somali, Oromiya, and SNNP Regional States.