State of the Africa Region: Lessons Learned from Resilient Economies 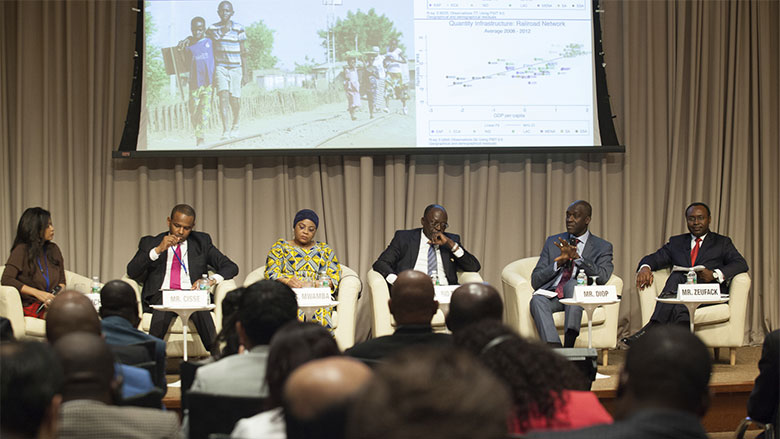 After two years of unprecedented growth, the region is currently facing a far less certain economic future, Diop told the standing-room only crowd. The World Bank’s most recent Africa’s Pulse, a twice-yearly analysis of economic trends and data, predicts that regional growth will fall to 1.6% in 2016, the lowest level in more than two decades.

“Times are tough right now, and there are no easy fixes,” Diop said. “We can no longer defer crucial reforms that will lead to diversified growth.”

Diop highlighted some of the factors that have contributed to the region’s slowed growth, including the impact of the global commodity super cycle, low agricultural productivity, and the region’s vulnerability to shocks.

During his presentation, Albert Zeufack, Chief Economist for the Africa region, emphasized that about a quarter of the region’s countries are showing signs of resilience. Ethiopia, Rwanda, and Tanzania have continued to post annual average growth rates of over 6%. Several countries, including Côte d’Ivoire and Senegal, have become top performers.

“What distinguishes resilient growth performers is their ability to have more diverse structure of exports and effective institutions,” Zeufack said. “They also establish better business regulatory environment and have stronger macroeconomic policy frameworks.”

After Zeufack’s presentation, Diop led a panel discussion with Abdoulaye Bio Tchane, Senior Minister of Planning and Development of Benin; Boubou Cisse, Minister of Economy and Finance of Mali, and Natu Mwamba, Deputy Governor of the Bank of Tanzania. Julie Gichuru, TV host of the Africa Leadership Dialogues, moderated the session.

“Our resilience mostly came from the diversification of our economic activity,” said Mwamba. “A decade ago we depended heavily on agriculture, which represented more than 50% of our exportations. Now, it accounts for less than 10%.”

Rwanda, which also shows signs of resilience, has been able to implement sound policies to support economic diversification. While a few years ago, 90% of its exportations income came from two products (i.e. tea and coffee), today other sectors are very dynamic, such as the tourism sector which contributes 25% of the country’s gross domestic product (GDP.) The country also invested massively in the education system.

During the live broadcast, people were encouraged to ask questions through social media channels. One follower brought up the lack of opportunities available to African youth, and asked the panel how jobs and other opportunities can be increased.

“If we don’t invest pragmatically in the quality of education we’ll have a problem,” Diop answered. “We have spent a lot of money on education; a lot of governments here have done tremendous efforts in term of allocating more resources in education. Some of the countries are spending one third of their budget on education. You cannot ask them to spend more.

Cisse said in Mali, there have been demonstrations led by people complaining about the lack of opportunities. He believes solutions should be innovative.

“We live in an increasingly globalized world characterized by fast technological progress, which requires us to adapt and develop innovative skills because our employment and education programs are no longer well adapted to what’s going to happen in 20 years,” said Cisse.

The panelists agreed on the importance of quality education, and reached the conclusion that African countries should invest in people to to boost productivity and accelerate the diversification and transformation of their economies.

Among other priorities to build more resilient and productive economies, the panelists pointed out the need to improve energy and utilities, to address the lack of infrastructure and to improve access to finance and land, especially for women who are at the heart of agricultural productivity in sub-Saharan Africa, where agriculture accounts for a third of region-wide GDP and employs two-thirds of the labor force

“My final comment will be on solutions,” said Bio Tchane. “We know the issues, but we also know the solutions, because we know that countries which are doing well in the continent are implementing the same solutions. So we really don’t need to go elsewhere to see what we need to do. We need to implement these solutions as well.”