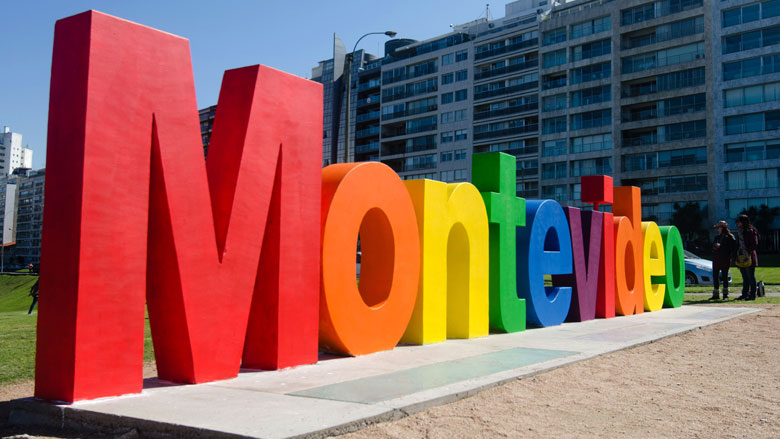 The Montevideo sign is painted to celebrate Gay Pride Day

A month ago the world stood still, shocked at the carnage in Orlando and the growing realisation that those murdered had been targeted because of their sexuality. It was a stark reminder in a world where, just 12 months before, the rainbow flag of the LGBT community decked social media following the approval of same-sex marriage by the US Supreme Court, that homophobia, transphobia and discrimination based on one’s sexual orientation, gender identity and sex characteristics is still very much alive.

And it’s a scourge, from which Uruguay is far from immune.

Homosexuality has been legal in Uruguay for over 80 years, but it’s really within the last decade that the country has become a leader for LGBTI rights both within Latin America and on a global scale.

Nonetheless despite these legal advances and social acceptance, the LGBTI community in Uruguay and across Latin America still face stigmas which bar them from full access to certain markets, services and spaces, which mean they are likely overrepresented in the bottom 40%, and therefore remain vulnerable to falling into poverty. This poverty cycle is then pernicious, limiting access to public health, education and housing.

And the impact of such exclusion is reflected in public data. According to the director of Uruguay’s State Health Services Administration (ASSE), the life expectancy for transgender women in Uruguay is just 45 years old - 32 years below the average for the general population. Two thirds of transsexuals in Uruguay will experience serious violent acts at least once in their lifetime and transgender women have the highest rates of HIV of any community in the country at 36.5%. Compare that to 9% for gay men and men who have sex with men, and 0.5% for adults between 15 and 49 years old.

In developmental terms, the full inclusion of LGTBI individuals in society is vital. So much so that the World Bank feels it would be unable to reach its twin goals of ending extreme poverty and promoting shared prosperity without such a move. However, one of the biggest stumbling blocks both the Bank and the State face is the lack of data.

Globally, the benefits of inclusion are clear. On average, every right awarded to LGTBI individuals is associated with GDP per capita increases of USD $300. Also higher levels of inclusion is linked to higher scores on the human development index.

Uruguay has country-specific data to support inclusion. According to the Chamber of Business and Commerce, the LGTBI community adds some US$ 3 million to the national GDP each year, and has a combined purchasing power of around US$ 7 million. What’s more, due to its inclusive legislation and promotion of LGTBI rights, Uruguay attracts around 250 thousand LGTBI tourists each year.

But having such data at a country level is unusual. Nonetheless, it is an area in which Nicholas Menzies, Senior Governance Specialist for the World Bank, feels that the Bank and the UN could have an important impact.

“We don’t really have good enough data in our client countries to quantify the costs of exclusion and measure progress. But this is the Bank’s expertise. Together with the UN we can help to set standards on questions, methods to go about asking them and protections and privacy for storing it,” he explained.

Consistently progressive legislation over the past decade has transformed Uruguay into one of the most advanced countries in Latin America and in the world in terms of LGBT rights. The country celebrated these successes at a global conference on Human Rights for LGBTI people, held in Montevideo last week.