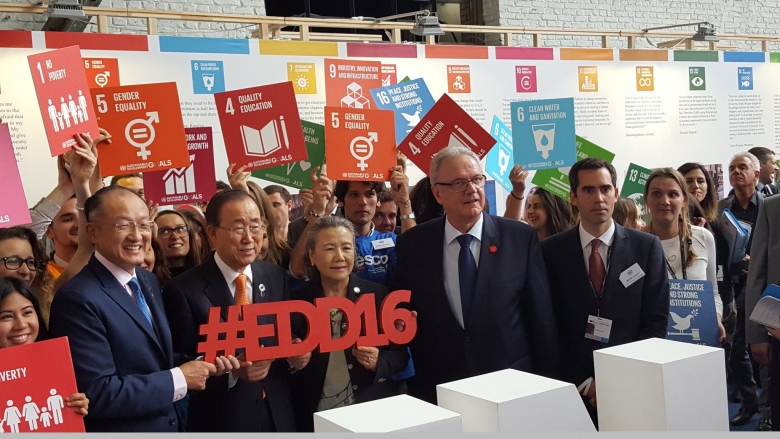 Thank you, @EuropeAid, for bringing the dev't community together to address how we can achieve #GlobalGoals. #EDD16 - Tweet from Jim Yong Kim ‏@JimYongKim

June 15-16, The World Bank Group participated in European Development Days (EDDs), an annual event in Brussels organized by the European Commission to bring together the development community to share ideas and experiences in ways that inspire new partnerships and innovative solutions to the world’s pressing challenges. The 2030 Agenda for Sustainable Development was the main focus of this year’s EDD, an event that is now in its 10th year.

World Bank Group President Jim Yong Kim spoke at the opening session of EDD 2016, along with Ban Ki-moon, Secretary-General of the United Nations, and Federica Mogherini, High Representative of the EU for Foreign Affairs and Security Policy and Vice President of the EU Commission, amongst others.

The World Bank Group was also represented at several high-level panels and discussions, including the session Local Action to Address Fragility and Protracted Displacement. Laura Tuck, World Bank Vice President for Social Development, took the opportunity here to highlight the institution’s work in fragile and conflict affected states, and the connection to the growing climate and disaster resilience portfolio, including in recovery situations. This event, co-organized by GFDRR, was a round of the Resilience Dialogue series, a partnership of the World Bank, the EU, USAID and Japan.

Another session to garner significant public interest was the panel organized by World Bank and the United Nations High Commissioner for Refugees (UNHCR) to discuss the main findings of their joint-report, The Welfare of Syrian Refugees: Evidence from Jordan and Lebanon. The session was moderated by Natalia Alonso, Director of Policy at Oxfam’s European Union Office in Brussels.

Ewen Macleod, Head of the Policy Development and Evaluation Service, UNHCR, presented the report, which explores the socio-economic profile, poverty, and vulnerability of refugees, evaluates current policies, and discusses prospects for policy reforms.

One of the key findings of the report is that welfare conditions for refugees in both Jordan and Lebanon have worsened over time, while poverty has risen and will likely continue rising in the near future if the situation remains the same.

Following Macloed’s presentation, Nandini Krishnan, Senior Economist and Poverty Specialist at the World Bank, spoke about the World Bank’s main initiatives in the Middle East. Krishnan presented a recent series of studies on understanding the impact of the Syrian refugee crisis on host communities, which takes a regional and integrated approach.

Collectively, the studies aim to gather comparable data on registered and non-registered refugees (and IDPs in Kurdistan) and host communities in Jordan, Lebanon and Northern Iraq (Kurdistan region), and to better assess their respective policies. The outcomes can then inform the allocation of resources and help design and target interventions to best address the needs and vulnerabilities of forcibly displaced people and their host communities.

Ultimately, the goal is to inform the transition from humanitarian assistance to development interventions, investing in host country systems in the medium-term and informing host country policy regime towards refugees. The studies and analytical tools also aim to help bridge the knowledge gap on the economic situation of Syrian refugees and their impact on local communities in the main host countries neighboring Syria.

Krishnan highlighted the importance of humanitarian and development agencies working together and joining efforts to collect better data and analysis on forced displacement in the region. In addition, these agencies should convene a broader set of stakeholders for more effective and efficient humanitarian development responses, and provide the host governments with sufficient evidence to inform their policy towards refugees and IDPs.

The Welfare of Syrian Refugees: Evidence from Jordan and Lebanon session highlighted the ongoing efforts of UNHCR and the World Bank to gather data that supports and strengthens evidenced-based advocacy in favor of the economic participation of refugees – demonstrating that such participation can yield better economic and social outcomes not only for refugees, but also for the host communities.

Also present at the EDDs was the World Bank Group’s private sector arm – the International Finance Corporation (IFC), organizing, amongst others, a session on “Investing in Fragile and Conflict Situations, who should adapt, investors or countries?” with Michel Botzung, IFC Manager for Fragile and Conflict Situations in Africa. The purpose of that session was to engage various European stakeholders in the Conflict Affected States in Africa program.