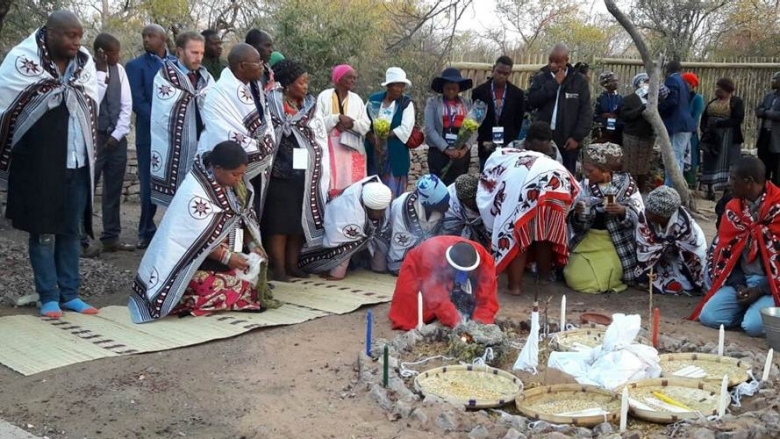 South African families pay their respects to the deceased whose graves may have been inadvertently distrubed during construction of the country's power plan construction site. Photo Credit: Eskom

LEPHALALE, July 8, 2016 – It’s the crack of dawn as families congregate to perform cleansing ceremony rituals at the unveiling of a memorial site created to commemorate their deceased relatives whose remains might have been inadvertently disturbed at the country’s electricity utility, Eskom’s Medupi power station construction site.

To the sound of drums, songs and chants, the affected families file in line behind traditional healers as they enter the memorial site. Here, the souls of the deceased are symbolically placed, having been lifted from where they are believed to have been laid to rest previously. It is a ritual performed in accordance with the families’ traditional customs to pay their respects to the deceased and to appease their ancestors.

“I am happy and thankful that, finally, our family, my children, and grandchildren now have a place where they can go and pay homage to their kin,” says Norah Magwai. She is one of six families affected in a case involving nine children, including Johannes Magwai, who were buried in unmarked graves on what was a farm in the period ranging from the 1960s to the 1980s before the land was acquired by Eskom.

All submissions regarding the graves at the Medupi construction site were accepted and recorded without applying a “burden of proof” as part of the screening procedure because of limitations in the physical evidence such as the registration of the births and deaths. The claims were considered valid on the basis of testimony made and subject to claimants signing affidavits as a legal precaution.

The ceremony was held to implement recommendations from two independent reports, following investigations into the alleged disturbance and destruction of graves at the Medupi power plant when construction commenced in 2007. Complaints regarding these graves were officially lodged with the World Bank and African Development Bank. Both banks are Eskom’s financiers on the Medupi power plant project, which is currently under construction with one of its six units already in operation.

“I have mixed feelings.  This has been a long and painful journey, but I am thankful for this process and the way we worked together with Eskom to make it happen.  Our voices have been heard,” said Stephen Tibanyane, another affected family member.

Recommendations from the reports were similar and emphasised the need to appease the affected; establish an area with a commemorative plaque in memory of those buried inside the construction site, hold a cleansing ceremony, and protect graves, amongst others.  Together, the South African Department of Environmental Affairs, which led a task team represented by, among others, the affected families, the South African Heritage Resources Agency, the Limpopo Heritage Resources Agency, traditional leaders, and the Lephalale Municipality – commissioned a heritage impact assessment report, and the Commission for the Promotion and Protection of the Rights of Cultural, Religious, and Linguistic Communities (CLR) undertook parallel investigations which were completed, respectively, in June and November 2015.  These recommendations were accepted by the families concerned and by Eskom.

In response, Eskom issued an apology to the families and community.  It also provided logistical and material support for the ceremony, which was planned together with the families.

“Eskom has worked with the local community and the region’s traditional leadership in its efforts to restore the dignity of the community. This is a very significant day - a moment in our history when we as a nation come together in acknowledgement that in this place lay a people who mattered. A people we loved - an individual and collective ancestry for our family bloodline, the people of Marapong and the South African collective,” said Eskom’s Group Chief Executive Mr Brian Molefe.

Furthermore, Molefe said Eskom will continue to work with the surrounding communities, the traditional chiefs of the region, the Provincial Government, the Local Government, the South African Commission for the Promotion and Protection of the Rights of Cultural, Religious and Linguistic Communities, the Limpopo Heritage Resources Authority and the South African Heritage Resources Authority to ensure the acknowledgement and respect a common ancestry.

Referred to as the Kgoro, the site of the memorial was identified within an Eskom conservation area near the Medupi power plant. This site was chosen to provide easy access and was deemed appropriate by the families, community members, and traditional leaders who participated in the process. The landscape design of the Kgoro incorporated natural and cultural symbols such as a morula tree - traditionally a place where elders would have gathered to meet.  Timber-framed walls screen the entrance to this site, and cement paving leads to the memorial wall bearing the names of the deceased.  Behind the wall are miniature reconstructed graves of the deceased, allocated to each family. The foot of the wall is reserved as a public space for the laying of wreaths.

“We are pleased that in resolving the matter of the graves at Medupi, the dignity of the people affected has been restored,” says Guang Zhe Chen, World Bank Country Director for South Africa. “This is in line with the World Bank’s own safeguard policy on preserving physical cultural resources.”

When it is completed, the Medupi power plant will be the fourth-biggest coal-fired power plant in the world.  It will provide 4,800 MW to South Africa’s national grid. Currently, Unit 6, the first to go into commercial operation in August 2015, and provides 800 MW when operating at full capacity.