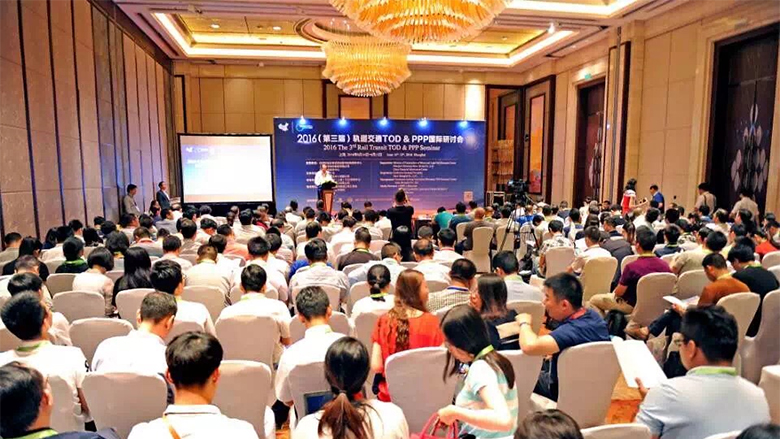 By the end of 2015, twenty-six Chinese cities constructed and operated urban rail transit systems, with a total of 116 lines and 3,618 kilometers of track. Both the national and local governments have recognized the potentials and benefits of applying TOD to rail transit development in China. In addition, many cities are exploring the PPP financing model in the construction and operation of urban rail systems. The symposium provided a platform to discuss the challenges and opportunities of TOD and PPP implementation in terms of policy framework, planning regulations, cooperation schemes and transaction arrangements.

“With the rapid development of urban rail in Chinese cities, it is a pressing challenge to all municipal urban rail authorities how to capture the land premium resulted from the rail transit and urban development effectively, in order to fill the financing gap of rail transit construction and ensure long-term sustainability of the rail transit system,” said Li Guoyong, former director-general of the Basic Industry Department of China’s National Development and Reform Commission, in his opening remarks at the symposium.

Experts from the public and private sectors shared their insights and experience on three core topics:  bottleneck and breakthrough of TOD-related policy, exploration of railway comprehensive development, and key issues faced by rail transit PPP project implementation. Compared to the previous events, a highlight was the experience sharing from the second- and third-tier cities which are actively involved in rail transit TOD and PPP experimentation. Presentations and panel discussions showed that implementation framework and detailed procedures need to be streamlined, despite progress achieved in rail transit TOD pilots in some cities.

In addition, a half-day workshop was organized on June 15 by the World Bank and the World Resources Institute, with the theme on “Contextualizing and Catalyzing Rail plus Property Development in China: City-to-City Knowledge Sharing”. It brought together 10 cities where Rail+Property (R+P) is implemented or planned, and metro companies from Hong Kong, Beijing, Shanghai, Shenzhen and Nanning.

The workshop participants discussed the R+P process flow, and identified the leading agency for each step, key challenges and possible solutions.

The most frequently mentioned challenges include:

Key lessons learned from the workshop include the following:

The symposium was part of the World Bank’s TransFORM activities on TOD. TransFORM is a knowledge platform jointly developed by the World Bank and Chinese Ministry of Transport to share China’s experience and know-how gained from 30 years of developing a large national transport network.