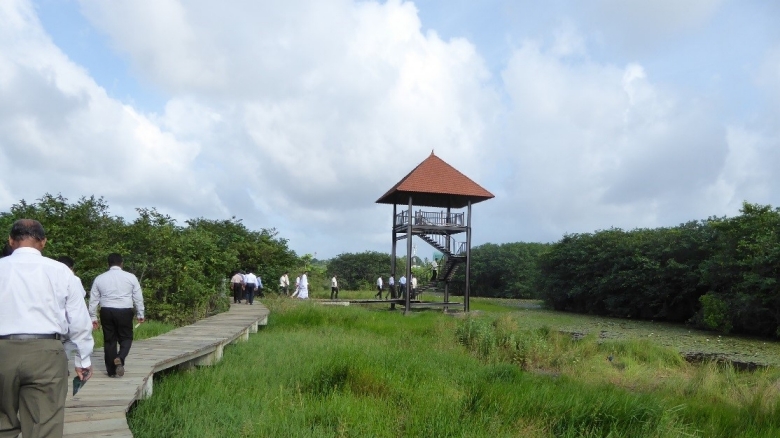 Colombo June 15, 2016 –The feeling while walking along the newly constructed boardwalk in Beddagana Wetland Park is calm and serene. The pathways are surrounded by lush vegetation, wildlife and lookout points where visitors can get a 365 degree view of the park. It feels like a nature preserve but in fact is located within the heart of Sri Lanka’s administrative capital, Sri Jayawardenapura Kotte in Colombo district. In addition to being beautiful to visit, wetlands are an important part of Colombo’s flood management system and help keep the city cool during periods of extreme heat. Why was this biodiversity park constructed as part of the World Bank supported flood management project?

Since 2013, the Metro Colombo Urban Development Project has been supporting the government in reducing flooding in the catchment, the collection of rainfall over a natural area, of the Colombo Water Basin. In addition, it strengthens the capacity of local authorities in the Colombo Metropolitan Area to rehabilitate, improve and maintain infrastructure and services through selected large-scale demonstration investments such as the park, which was a Rs. 181 million (around $ 1.2 million) investment.

" Sri Lanka has a unique opportunity to protect its wetlands to prevent flooding and provide cooling during times with high temperatures. Countries around the world are realizing the importance of preserving wetlands and green spaces. The Government of Sri Lanka has developed a Wetland Management Strategy in partnership with the World Bank. We are delighted to contribute our global experience to support Sri Lanka in its journey to preserve wetlands, educate the public, and reduce the social and economic impacts of floods in Colombo.  "

It is estimated that if Colombo was to lose all its wetlands, then the Colombo Metropolitan Region (CMR) would be at a risk of losing 1% of its GDP on average each year due to flood damage – similar to damages suffered in the massive floods that paralysed Colombo in November 2010.

The Wetland Park is critical for many reasons: It provides a relaxing recreational facility, helps with flood control, provides a refuge for flora and fauna, and moderates the temperature of the immediate surrounds. The park can also educate the public about the city’s natural resources as well as providing much-needed open space and walking paths.

The Beddagana demonstrative initiative is a first of its kind in Colombo. It has provided an exciting and unique experience in:

“The Metro Colombo Urban Development Project, since inception in 2013 has completed most of its demonstrative initiatives such as Beddagana Wetlands Park. The complex and major works that would speed up efforts to reduce floods are yet to come. The World Bank is working in close collaboration with the Government of Sri Lanka and its citizens to reduce floods in the Colombo Metropolitan Region”.

This project is the first Bank supported urban development project in Metro Colombo. The Bank has provided $213 million and the Government $100 million. The Bank has also mobilized a Japan Policy and Human Resources Development Fund (PHRD Grant) and Global Facility for Disaster Risk and Reduction (GFDRR) to further studies on flood mitigation and Colombo’s urban wetlands. Technical Financing has ensured robust decision making and analytical working, for example establishing the cost benefit of the city’s wetlands.

Over the coming years, the project will undertake an ambitious flood management program including drainage, underground tunnels and canal construction, flood gates and water diversion. It will also create a flood management system to maintain the drainage network. The estimated population of 2,553,000 people living and working in Colombo are all beneficiaries, however, the direct flood mitigation beneficiaries are estimated to be about 232,000 people.

Colombo will be better prepared for the future as its residents will be less vulnerable and more resilient to flooding. This will help protect the city’s increasing population, infrastructure and natural environment. A more resilient and livable Colombo will help reduce poverty and promote prosperity and help Sri Lanka realize its development potential.