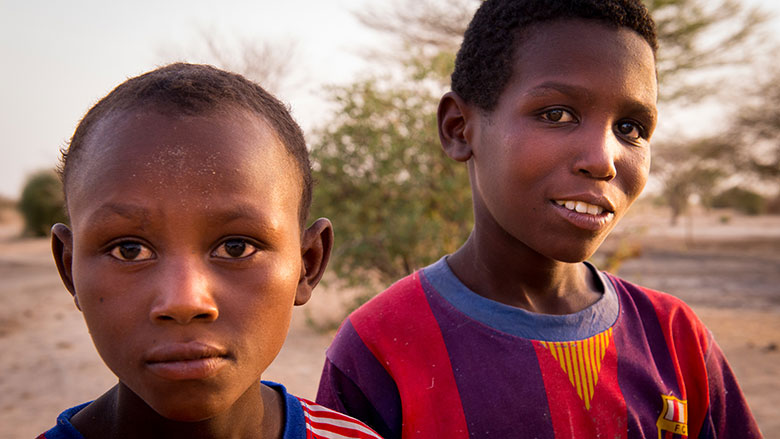 Throughout several regions in Chad, classrooms consist more often than not of sheds and straw structures. In the dry season, students and teachers alike battle against the dust.

N’DJAMENA, June 16, 2016 – In N’Djamena, like many other regions in Chad (Mandoul, Mayo Kebbi Est, Mayo Kebbi Ouest, Tandjilé), classrooms often amount to no more than sheds or structures made of straw. In the hot months, children and teachers alike battle with the dust. During the rainy season, schools are, quite simply, closed.

“Among the 876 schools in the region of Mandoul, 80% are in sheds. As we are in an area that experiences heavy rainfall, once the rains begin, we are forced to cut classes short. This has dealt a serious blow to the ability to implement curricula,” notes Amat Oudah Nour, regional education delegate for Mandoul (Koumra). In the department of Mayo Dalla, the head of the inspection department, Mbaïramadji Dorom Urbain, made the same observation: "Infrastructure challenges in our department often force us to abridge the school year and curricula. Of 273 classrooms, only 60 are built out of concrete, of which only 40 are in good condition. The rest are sheds, the construction of which depends on the harvest as they are made using millet stalks.”

In a number of departments, the dearth of classrooms buildings is hard to believe. According to the departmental inspector for Pala, Abadou Hamadou Roufaou, “the ratio of students to classroom buildings is troubling. It is estimated that there are close to 2,000 students per classroom building. Given this situation, we simply are not able to keep students in school over the full nine school months.”

In the Kaba 6 schoolyard, located in the department of Bahr Sara, all the children’s parents were present. There was buoyant energy in the crowd and a candid joy emanated from their bright smiles as the mission leader for the Second Education Sector Reform Project (PARSET 2) began to speak, outlining the purpose of the trip. “We are here with you today to inform you that your community is receiving two classrooms and four latrines for the girls and boys,” stated Leonard Yoradé Nadji, the official responsible for project procurement. Shouts of joy and applause greeted this announcement made on March 25, 2016, as the news couldn’t have been more welcome by the parents of students and the regional education authorities alike.

The approaching school year will begin auspiciously for 35 villages in the regions of Mandoul, Mayo Kebbi Est, Mayo Kebbi Ouest, Tandjilé, and the city of N’Djamena. As part of the second phase of PARSET 2, 70 classrooms are in the process of being built. “I can only express satisfaction with the World Bank project because our major challenge in Mandoul is the lack of sturdy, comfortable classrooms in which to accommodate our students,” Amat Oudah Nour happily stated.

These positive reflections were echoed across cities and villages within the five regions. It is easily understood given the challenging learning and teaching conditions previously experienced. In the city of Pala (Mayo Kebbi Ouest), Jean-Pierre Gasmala, who has taught for eight years at the Neen Houaré school, is all too familiar with this issue: “With 90 students in one classroom made of straw, we do our best to accommodate the students. The improvements financed by PARSET 2 will change our lives.”

“All of the new classrooms will be equipped with 1,260 tables and benches, each with seating for three, and 70 latrine units with two stalls, which is the equivalent to 140 stalls,” affirmed Leonard Yoradé Nadji. In contrast to the first phase, the communities will no longer have to pay 10% of the construction costs because the project is now covering 100% of the costs in order to lighten the community’s financial burden.

Significant resources have also been deployed by the project to ensure regular, effective monitoring on the ground. Tablets, projectors, and motorbikes will be distributed to decentralized planning, supervisory, and training structures for primary school teachers in the project intervention zones. These materials will help beneficiaries ensure close supervision of primary school teachers and allow for a regular collection of reliable statistical data on the schools, teachers, and students. This data will help different actors of the education chain make decisions to better direct and manage the ministry’s resources.

The launch of these works is only one of the many project components corresponding to the activities carried out at the primary school level. Others include the provision of additional furnishings, textbooks, teacher guides, as well as the improvement of training and management of community schoolteachers. PARSET 2 also addresses secondary school, where the provision of documentary resources in 30 secondary schools as well as in-service training of science teachers are planned.

The first phase of the PARSET achieved several objectives that now consolidate the gains made in the education sector in Chad: 400 classrooms were built and equipped; 465 latrines and 253 water points were built in schools; and 3,077,000 textbooks were purchased and distributed to schools. With respect to training, 20,000 students (60% of whom are female) learned to read and write, and 13,200 community schoolteachers were trained.