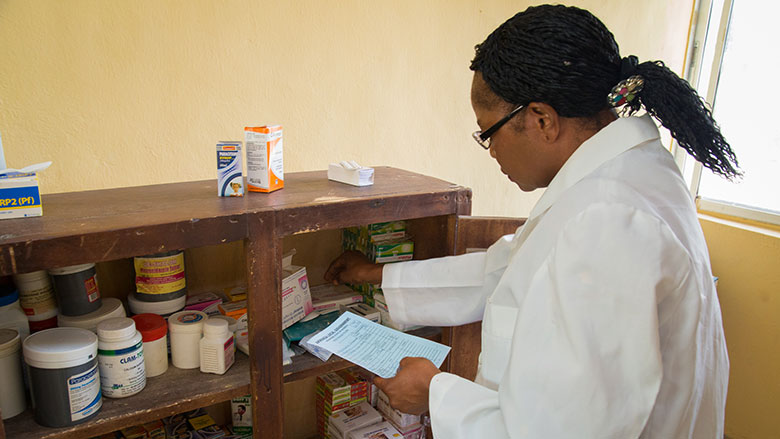 NASAWARA STATE, June 9, 2016 – At the Model Primary Health Care Center, more than 25 expectant mothers line the hallway waiting patiently for the weekly antenatal session to begin. A nurse soon appears in the doorway of the examination room. In Hausa, the language of the region, she begins to discuss the importance of nutrition for their growing babies.

This is the third baby for Fatima Yakubu, 20, and the second time she has come to Model PHC for antenatal care. While the level of care from the staff is the same, Yakubu said this time, the conditions are very different; she no longer has to pay for weekly prenatal services, and she can now get the medicine she needs at an affordable price. Through a translator, Yakubu said she is happy and feels safer knowing that her unborn baby is being taken care of.

Model PHC is one of 964 local health centers in Adamawa, Nasawara and Ondo States benefitting from the Nigeria State Health Investment Project (NSHIP), a performance-based financing (PBF) program that rewards clinics and staff for increasing the number of patients, particularly pregnant women and children under five. With the money, clinic staff are able to improve their facilities and health services.

“Things have changed,” said Ezekiel Musa Jagga, local government authority public health center coordinator and chairman of the local government council. “They are the boss of their own their money to use for whatever they need, drugs, equipment, depending on the needs of the community.”

“Visits were poor,” Joshua said. “For pregnant women, there was no first visit before 16 weeks, and they would hardly come back again.” With the establishment of PBF in 2011, they are now seeing as many as 385 people each month, Joshua said.

Much of the center’s success has come from community outreach, or what Joshua calls “motivation and mobilization.” Four times per month, Joshua and Gitta Ward staff visit the villages furthest away from the center, bringing immunizations, malaria testing and antimalarial drugs and HIV/AIDS screening and counseling to them. This is also a chance for them to educate communities about the changes at Gitta Ward, Joshua said.

“When we get there, we work with everyone, but especially those who are pregnant,” Joshua said. “We let them know there are free deliveries, we don’t charge for consultation. And the price of our drugs is affordable compared to when there was no PBF.”

With the money, Joshua has been able to purchase much-needed health equipment such as blood pressure machines and forceps, as well as complete renovations of the clinic to provide electricity, and a maternity ward which now has more than 10 beds. Trained staff has increased from one nurse to four, and they offer services 24 hours a day.

Bulus Ishaya, chairman of the Gitta Ward Development Committee, said many people didn’t want to come to the health center because of the low availability of drugs.

“The coming of PBF brought awareness to our people,” he said. “People now have the need to come to our clinic. They are happy to see what is happening, and the availability and reduction [in price] of the drugs make them come to the facility.”

The PBF approach has also improved documentation, increased access to health data, and opened communication between health centers and the government. Through monthly meetings, health center staff can share key learnings and challenges with one another, and provide data that can help curb a health crisis before it begins.

“We were not a team before PBF,” Jagga said. “The team is the government and health facility working together, supportive supervision, training for activities. Before we were not linked, no communication, no consistent reporting … now there are meetings once a quarter to discuss issues.”

Based on the success of the   program, the next step is to increase it in the current states, and expand to at least five additional states, said Ayodeji Odutolu, World Bank senior health specialist and task team leader for the project. This month, NSHIP is expanding to the North-Eastern State of the country, which has been hit hard by the Boko Haram insurgency. The program will help to immediately help rebuild health services, with a focus on maternal health, nutrition, psycho-social support and mental health. This will also include developing a comprehensive communications plan, engaging with government and training new health staff in PBF procedure.

“We want to finance initiatives that translate into good health,” Odutolu said. “If the government knows that it can get results using this approach, then why not put money in that, rather than the old way which does not translate into health?”